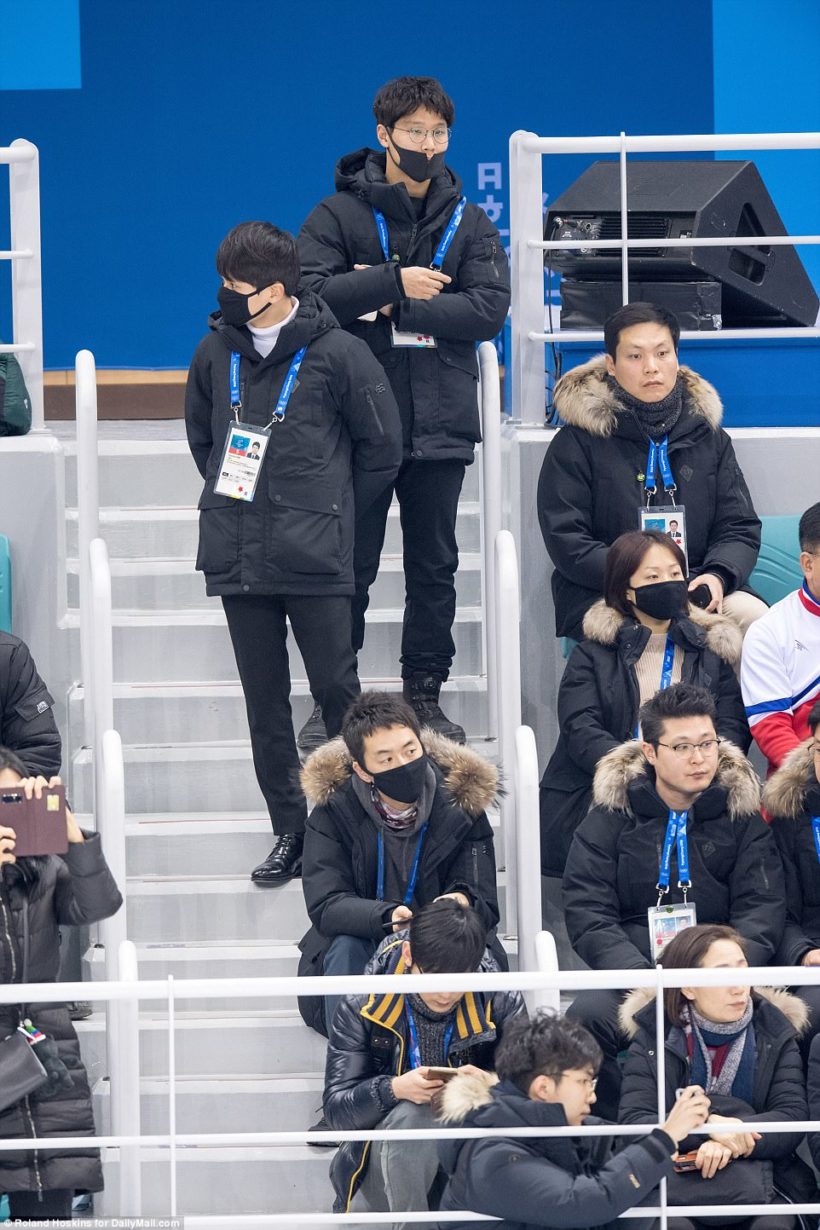 North Korean government 'minders.' The masked guards are unarmed, having had to give up their guns under Olympic rules, but they are highly trained in martial arts and are members of elite units in their native North Korea. (UK Daily Mail)

(by Khaleda Rahman, UK Daily Mail, Feb. 12) – North Korean athletes are reportedly being guarded round the clock at the Winter Olympics in a bid to prevent them from defecting.

About 500 North Koreans are in PyeongChang in South Korea for the Games, including athletes, officials, cheerleaders but also security officials, minders and informants, CNN reports.

But although athletes from the two Koreas marched together carrying a unification flag at the opening ceremony, the reality is said to be far different.

Security guards will be keeping guard over athletes at all times to ensure no-one defects to the South, a former North Korean police officer told the network.

Unlike most athletes who bunk with teammates, North Koreans will share their rooms with minders who will be closely monitoring their every move.

Security will follow them everywhere they go, including the bathroom, as any defections will cause embarrassment to Kim Jong-un’s regime and spark a diplomatic crisis.

They will also make note of who athletes speak to and report any suspicious activity back to Pyongyang. Han Seo-hee, an ex-cheerleader who defected from the North in 2006, said any North Korean group sent abroad is divided into three groups – athletes, administrative officials and security members.

But although North Korean athletes have defected during competitions before, she says it is unlikely any will do so during such a high-profile event.

“I wouldn’t have even considered it,” Seo-hee told CNN.

She was picked to be part of a North Korean cheerleading troupe after she performed for the country’s late leader, Kim Jong-il (Kim Jong Un’s father).

“It will be the same for the cheerleading squad this time. They have family back home, they know if they defect, their family will be terrified and punished,” Seo-hee said.

According to South Korea’s Ministry of Unification, which manages defectors, about 31,000 North Korean defectors have fled to the South since Kim Jong-un’s grandfather took control of North Korea sixty years ago.

A woman’s ice hockey player defected in 1997. Two years later, a judo athlete defected during a competition in Spain.

2. For NORTH KOREA:
a) list the who, what, where and when of the news item
b) Define defect, minder and informant as used in the article.
c) U.S. media, including CNN and NBC (which is televising the Olympic games) aired reports about how wonderful dictator Kim Jong Un’s sister was leading the North Korean delegation at the games. Why was it wrong for U.S. media to air such flattering reports on the North Korean regime?