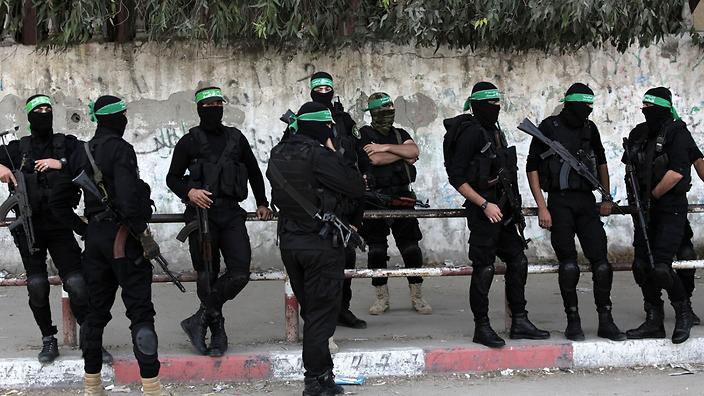 Fighters from Al-Qassam Brigades, the military wing of the Palestinian Hamas organization.

(from France24 with Agence France-Presse, Dec. 3)  – The Palestinian Islamist movement Hamas which controls Gaza called Saturday for a new intifada* if Washington recognizes Jerusalem as the capital of Israel or moves its embassy to the disputed city. (*Intifada means: uprising, rebellion; specifically: an armed uprising of Palestinians against what they see as Israeli “occupation” of the West Bank and Gaza Strip. The first Palestinian intifada was in 1987.)

Reports in Washington have suggested President Donald Trump may soon fulfill a campaign pledge on the American embassy, which like all other foreign missions is currently located in the coastal city of Tel Aviv.

“We warn against such a move and call on the Palestinian people to revive the intifada if these unjust decisions on Jerusalem are adopted,” Hamas said in a statement.

Any decision to move its embassy there would be “a flagrant attack on the city by the American administration” and give Israel “a cover for continuing its crime of Judaising the city and emptying it of Palestinians,” it said.

The status of Jerusalem is a key issue in the Israeli-Palestinian conflict. Both Israelis and Palestinians claim the city as their capital and previous peace plans have stumbled over debates on whether, and how, to divide sovereignty or oversee holy sites.

The last Palestinian intifada, or uprising, which claimed the lives of some 3,000 Palestinians and 1,000 Israelis, was sparked when conservative leader Ariel Sharon visited Jerusalem’s Temple Mount in 2000.

The Palestinian president’s office told Agence France-Presse on Friday that American recognition of Jerusalem as the capital of Israel would “destroy the peace process.”

Since 1995 it has been US law (the Jerusalem Embassy Act) that Washington’s embassy in Israel must be moved from Tel Aviv to Jerusalem….

But every six months since the law was passed every US president has signed a waiver to hold off on a switch which would enrage Palestinians and their Arab supporters. (Presidents Bill Clinton, George W. Bush and Barack Obama have chosen to adhere to Palestinian demands rather than uphold U.S. law.)

President Trump has signed the waiver once, and grudgingly, after vowing to Jewish-American supporters that he would be the president to finally make the switch (from Tel Aviv to Jerusalem to uphold US law).

The next deadline came [yesterday, but President Trump has delayed his decision], and some in Washington suggested that he was planning a speech on the issue before Vice President Mike Pence heads to Jerusalem.

The White House has described reports he may refuse to sign the waiver as premature — but sources told AFP they expect Trump to formally declare Jerusalem Israel’s capital.

The international community has never recognized Jerusalem as the capital of Israel or its unilateral annexation of a band of territory around the city’s eastern sector, which it captured in the 1967 Six-Day war.  … 2. For PALESTINIAN AUTHORITY:
a) list the who, what, where and when of the news item
b) What threat did Hamas make if President Trump moves the U.S. embassy in Israel from Tel Aviv to Jerusalem?
c) What effect will moving the embassy have on the Palestinian-Israeli peace process, according to the Palestinian president?
d) In what year did Congress pass a law that requires Washington’s embassy in Israel to be moved from Tel Aviv to Jerusalem? Why is our embassy still in Tel Aviv?
e) What do you think President Trump should do now?

Read: What is Jerusalem’s Temple Mount and Why Is There So Much Fighting Around It?

Hamas is a Palestinian Sunni Islamist terrorist organization that currently (since January 2006) forms the majority party of the Palestinian Authority…. Hamas is known outside the Palestinian territories for its suicide bombings and other attacks directed against Israeli civilians, as well as military and security forces targets. Hamas’ charter…calls for the destruction of the State of Israel and its replacement with a Palestinian Islamic state in the area that is now Israel, the West Bank, and the Gaza Strip……In January 2006, Hamas won a surprise victory in the Palestinian parliamentary elections….  Many [Palestinians] perceived the preceding Fatah government as corrupt and ineffective…  Since Hamas has taken control, the Palestinian territories have experienced a period of sharp internal conflicts, known as Fauda (anarchy), in which many Palestinians have been killed in…fighting [between Hamas supporters and Fatah supporters]. (from a 2011 wikipedia entry)

Watch a video “The Truth About Jerusalem:”

Watch a video “Why Isn’t There a Palestinian State” from Prager U: