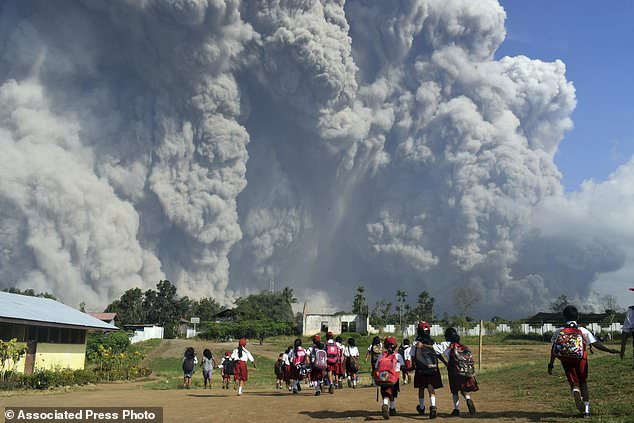 School children walk as Mount Sinabung erupts in Karo, North Sumatra, Indonesia, Monday, Feb. 19, 2018. Rumbling Mount Sinabung on the Indonesian island of Sumatra has shot billowing columns of ash more than 5,000 meters (16,400 feet) into the atmosphere and hot clouds down its slopes. The volcano, one of three currently erupting in Indonesia, was dormant for four centuries before exploding in 2010. (AP Photo/Sarianto)

(by Ed Adamczyk, UPI and staff reporters at AFP in Karo, North Sumatra, Feb. 19) — Indonesia’s volcanic Mount Sinabung erupted on Monday, sending ash and smoke about 16,000 feet into the air.

No one lives inside a previously announced no-go zone around the volcano. But hundreds of houses outside the 4.3 mile danger zone were covered in volcanic ash.

“In some villages the visibility was barely five metres (16 feet) after the eruption — it was pitch black,” Perangin-angin added.

Mount Sinabung, on the island of Sumatra, erupted in 2010 for the first time in 400 years and has been regarded since as an active volcano. It erupted again in 2013. An eruption the following year killed 16 people, and another in 2016 killed seven.

Rain is expected in the area on Tuesday and Wednesday, which can combine with ash to make slippery travel conditions and increase the possibility of roof collapses and the volcanic version of mudslides, Accuweather reported on Monday. Wet ash also is capable of conducting electricity, which can lead to power failures.

The ash cloud could impact airplane flights around northern Sumatra, to southern Thailand until Tuesday, when the cloud is expected to dissipate. The Australia-based Darwin Volcanic Ash Advisory Center set its aviation alert level to red after the eruption, warning pilots to avoid the area.

Indonesia is home to around 130 volcanoes due to its position on the “Ring of Fire,” a belt of tectonic plate boundaries circling the Pacific Ocean where frequent seismic activity occurs.

Map of Indonesian volcanos – from Wikipedia:

2. For INDONESIA:
a) list the who, what, where and when of the news item
b) Before 2010, when was the last time Mt. Sinabung erupted?
c) No injuries were reported from Monday’s eruption. What negative effects might occur as a result of this latest eruption?
d) What is the Ring of Fire?