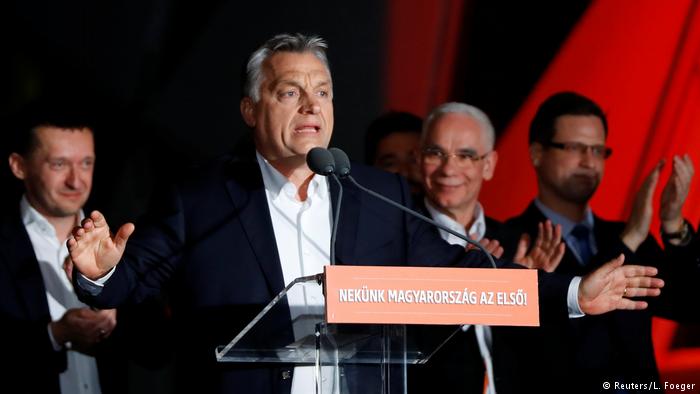 (UPI and others) — Hungarian Prime Minister Viktor Orbán won a third consecutive term Sunday as his Fidesz party won 133 out of 199 Parliament seats in nationwide elections. [Voter turnout was around 69% — nearly a record for the country.] (Check out how this number compares with U.S. voter turnout for presidential elections in the past 50 years.)

Hungarian voters handed a super majority to Orbán, who campaigned on a platform that [criticized the left-wing leaders of] the European Union and opposed [the mass migration from Africa and the Middle East to Europe that was instigated by German Chancellor Angela Merkel in 2015].

On thousands of billboards across the country, the Fidesz party put up a campaign ad that included a long line of migrants with a picture of a large “STOP” sign, reinforcing a major issue of concern for voters and highlighting the party’s hardline stance against more open immigration policies advocated by some EU leaders [which allow any refugee or economic migrant that makes it to any EU member country to apply for legal status]. Supporters of Viktor Orban react to the preliminary results of parliamentary election in Budapest, Hungary

The decisive win was seen as a blow to Hungary’s other parties, leading to the resignations of the chairman of the far-right Jobbik party, as well as the president of the left-wing Socialist party. [The Socialist party had only won 20 parliamentary seats despite forming an election alliance with the green-liberal Dialogue party. Orban won by such a resounding margin that the entire leadership of the socially liberal Together party resigned on live television, as did the head of the Socialist party. Jobbik party’s chairman Gábor Vona told reporters he refused to congratulate the winner—then he resigned, too.]

Orbán and Fidesz’s victory was praised by right-wing leaders across Europe, including the France’s Marine Le Pen and Netherlands’ Geert Wilders.

Jaroslaw Kaczynski, head of Poland’s governing party, said the Hungarian election was a decision “about the road to freedom, not only in Hungary but also in Europe and the world.”

“Orban is a blessing for this country, and also I think for the whole of Europe,” retired voter Karin, 65, told AFP on Sunday.

[Prime Minister Orban has been labeled an “anti-immigrant nationalist” who is “against immigration,” and a “right-wing nationalist (who) projected himself as a savior of Hungary’s Christian culture against Muslim migration into Europe” – because of his opposition to mass migration and belief that his country’s culture is worth preserving.]

“We experienced what Communism meant,” said retiree Anna Szonto. “Orban is for the people. We don’t believe anything the liberals are saying about him.”

Compiled from reports at UPI, AFP, Euro News and The Wall Street Journal.

1. For HUNGARY, give the following information:

2. For HUNGARY:
a) list the who, what, where and when of the news item
b) What percent of eligible voters turned out to vote?
c) Prior to the election, Prime Minister Orban’s party held 132 seats in parliament. The Wall Street Journal wrote “Orban’s party risks losing its hold in parliament.” How many seats did his party win in this election?
d) This is the third super-majority Mr. Orban’s party won. What do you conclude about Hungarian voters’ view of the European Union’s “open door” migrant policies?

As a 26 year-old law student in 1989, Orban stood up to the Communist regime of the Soviet Union, who at that time controlled Hungary. He gave a stirring speech demanding democracy and that Soviet troops go home.

Co-founding the Alliance of Young Democrats party (Fidesz), Orban was one of “new” Europe’s leaders, becoming an MP in newly democratic and optimistic Hungary in 1990.

Orban developed a rare knack for connecting with ordinary voters. He was elected prime minister in 1998 at just 35.

His first period in office was rocky, however, and Orban lost to the Socialists in 2002 and again in 2006 before bouncing back…in 2010…

This time, armed with a two-thirds majority in parliament, Orban implemented a …reform of Hungarian state institutions and introduced a new constitution steeped in conservative values. Orban says that he had to repair years of left-wing mess.

He was re-elected in 2014, again with a super-majority, and Europe’s migrant crisis the following year saw Orban [stand up in] opposition to German Chancellor Angela Merkel’s “open-door” refugee policy, [which saw not only refugees but hundreds of thousands of economic migrants from North Africa inundate Europe].

As hundreds of thousands of people streamed through Hungary bound for western Europe, and with Budapest train stations resembling squalid refugee camps, Orban erected a fence on Hungary’s border with Serbia.

Illegal immigration — a “Trojan horse for terrorism” — was made punishable by lengthy jail terms. It was Hungary’s duty to defend the outer frontier of Europe, just like against the Ottomans in the 17th century.

Orban’s strident stance has turned Hungary, along with Poland’s like-minded government which has also raised concerns with its own reforms, into a headache for Brussels [the left-wing head of the European Union] and the rest of the EU.

Jaroslaw Kaczynski, head of Poland’s governing party, said the Hungarian election was a decision “about the road to freedom, not only in Hungary but also in Europe and the world.”