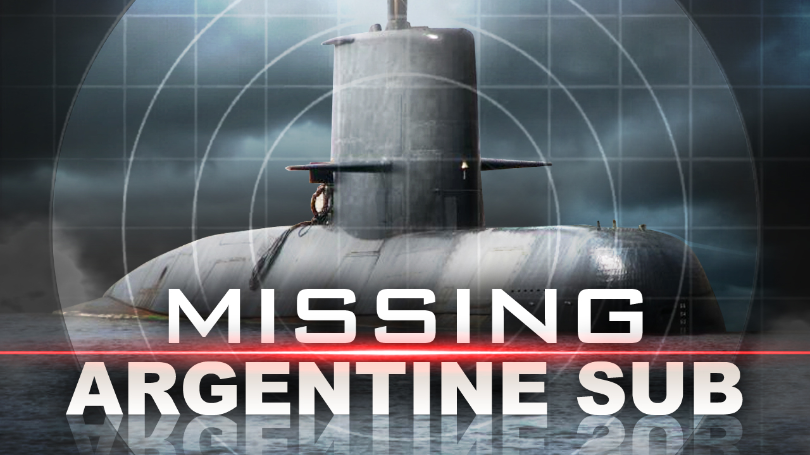 (by Hugh Bronstein, Reuters, Nov. 26) – BUENOS AIRES – Searchers for an Argentine submarine missing since Nov. 15 battled gale-force South Atlantic winds on Sunday while a navy spokesman held out hope that the 44 crew members may still be alive in an “extreme survival situation.”

The ARA San Juan had only a seven-day supply of air when it reported its last position, according to officials. Relatives of crew members focused on the possibility that the submarine may have been able to rise high enough in the ocean to refill its oxygen tanks at some point after its disappearance.

Argentina’s official weather service ordered an alert for “intense winds of between (31 and 56 mph), with gusts,” in Chubut province, the location from which search vessels were sailing. The ARA San Juan (pictured) has been missing for a week after reporting a fault before dropping out of communications.

Asked by a reporter about the chances that the crew may still be alive, Balbi left that as a possibility.

“We’ve been searching for 11 days but that does not remove the chance that they could still be in an extreme survival situation,” Balbi said.

The U.S. Navy’s Undersea Rescue Command sent a ship from Chubut’s port Comodoro Rivadavia on Sunday, outfitted with a remotely operated mini-sub to be used as a rescue vehicle if the San Juan is found. The ship was expected to reach the search zone some 430 kilometers (267 miles) off Argentina’s southern coast by Monday afternoon.

A sudden, violent sound detected underwater near the last known position of the 213 feet long diesel-electric submarine suggested it might have imploded on the morning of Nov. 15th, after reporting an electrical problem and being ordered back to base.

Oscar Vallejos, a naval veteran and father of San Juan crew member Celso Vallejos, told local television that he refused to believe his son would not return alive.

Other crew family members were less sure.

“We are in a state of total uncertainty,” Maria Victoria Morales, mother of Luis Garcia, an electrical technician aboard the missing Cold War-era submarine, told Reuters by telephone.

A Russian plane arrived in Argentina on Friday carrying search equipment capable of reaching 6,000 meters (20,000 feet) below the sea surface, according to the Argentine navy.

The international search effort includes about 30 ships and planes manned by 4,000 personnel from 13 countries including Brazil, Chile and Great Britain.

The 66-meter (216.5 foot) sub—which was built in Germany in 1983—is carrying a crew of 44 submariners. Forty-three of the crew members are male, but the sub is also carrying Eliana Maria Krawczyk, the first female submarine officer in Argentina.

Additional reporting by Eliana Raszewski; Editing by Phil Berlowitz and Will Dunham 1. For ARGENTINA, give the following information:

2. For ARGENTINA:
a) list the who, what, where and when of the news item
b) What hope do some relatives have that the crew of the ARA San Juan is still alive?
c) How many countries have sent planes and ships to search for the missing sub?
d) What type of assistance has the U.S. sent?

What happens when a submarine vanishes:

Why can’t subs be detected?

Submarines are built to be difficult to find. Their role is often to participate in secret surveillance operations.

Dr. Robert Farley from the University of Kentucky said that a sub is very hard to trace if resting on the seabed because under such circumstances it will not be making any “noise.” He explained, “Noise, which would otherwise be picked up by what is known as passive sonar, is distorted and [the sub] looks – to active sonar pings – like the sea bottom.”

So how can subs be found?

There are a number of ways that the captain or crew can make their location known if in distress. These methods include sending signal calls to contacts at naval bases or allied ships, or releasing a device that floats to the surface but remains attached to the submarine. What do we know about what happened?

Before the submarine went missing, the crew had reported a malfunction in the vessel’s batteries caused by an intake of water through the snorkel system (by which it renews oxygen). However, the commander reported that the problem had been resolved.

On Wednesday, Nov. 22 (one week after the sub disappeared), the navy said there had been a loud noise detected about 30 nautical miles (60km) north of the last-known location of the submarine. A spokesman called this a “hydro-acoustic anomaly.” On Thursday, the same spokesman – Capt Enrique Balbi – said there was an event consistent with an explosion nearby but the cause was not known. He called it an “abnormal, singular, short, violent, non-nuclear event” and said the search would continue in the same area.

What if it has sunk?

“If it had sunk in waters of less than about 180m (600ft) it’s likely that someone would have tried to escape from the submarine,” speculates Mr Little. “As that hasn’t happened, it’s probably in waters deeper than that.

“I’m hopeful that it’s less than 600m (1,968 feet) – because that’s the depth at which the assembled rescue forces are capable of operating. If they were to search at contours between 180m and 600m… that would give them the best chance of finding the submarine.”

Rescuers can’t reach below 600m, Mr Little said – and below that, each submarine has a “crush depth” at which point its structure will not be able to withstand the water pressure.

It is extremely rare for submarines to sink, Mr. Little points out. It last happened in 2000, when the Russian submarine the Kursk sank in the Barents Sea, killing all 118 crew on board.

How long can a crew survive submerged?

The number of days that a crew can survive depends on how long they have already been performing duties underwater and how well prepared they are for losing power.

“If batteries were charged and air refreshed, then outlook is hopeful,” Dr. Farley said. In relation to the Argentine sub he added: “Outer range appears to be 10 days if they were well prepared.”

How is the crew trained for this?

One of the most important practices is for trapped crew members to slow down their breathing rates in order to conserve oxygen.

Dr. Farley says that this it is a hard thing to train people to do, adding that in such circumstances: “My guess is that they would be cautioned to reduce activity and reduce speaking in order to save oxygen.”

The conditions, likely to be cold and damp, may well have a detrimental impact on morale, but the personnel on board will be well trained and disciplined.

They will likely establish routines, making themselves as comfortable as possible while minimizing their movements and supporting one another as they await rescue.

The response to these emergency incidents has also been improved at the international level since the Kursk disaster.

An organization called the International Submarine Escape and Rescue Liaison Office, based near London, co-ordinates all international response and is playing “a key role in this operation,” Mr Little says.

What are the main dangers?

With a possible shortage of oxygen and a build-up of carbon monoxide, suffocation is the number one risk.

Oxygen can be supplied either through canisters or generators that perform a process called “electrolysis” – which effectively separates components such as water and oxygen. However a lack of power will hinder this process and the supply may gradually run out.

There are other dangers that could also come into play.

Dr. Farley points out that if a compartment within a trapped sub becomes flooded, this can lead to “flash fires and other nastiness” as the air gets further compressed.

Is there a plan for such accidents?

In the event that a submerged vessel suffers problems in returning to the surface, procedures can be implemented to help raise it.

To control buoyancy, the fuel or ballast tanks – which can add weight – can be emptied and used to lift the sub. To achieve this, the diesel fuel or ballast is released, emptying the tanks, and the chambers are then filled with air.

Subs also have small hydroplanes; wings that are adjusted to allow water to travel in different directions as the vessel pitches its bow and stern up or down to assist its movement. (BBC)