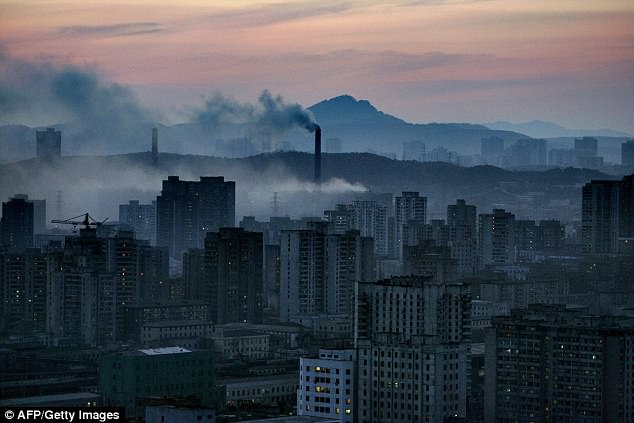 The graphite bomb would cover Pyongyang's electrical facilities in carbon graphite filaments which would shut down the country's power grid and nullify its nuclear threat.

(by Yaron Steinbuch, New York Post) – South Korea is prepared to use non-lethal graphite bombs — also known as “blackout bombs” — to short-circuit the North’s electrical grid in the event of a nuclear war, according to a report.

“All technologies for the development of a graphite bomb led by the ADD have been secured. It is in the stage where we can build the bombs anytime,” a military official told Yonhap.

The Defense Ministry had requested that next year’s budget include the equivalent of about $436,000 for the project — but the Finance Ministry turned it down, he added.

The bomb is often referred to as a “soft bomb” because it only affects targeted electrical power systems.

Analysts believe the bombs would work well in North Korea, whose targets are likely to be obsolete and not insulated, the Telegraph of the UK reported. [Graphite bombs only work on power lines that are not insulated. Carbon fibers in the cloud cling to power lines, causing grids to short circuit and cut out.  The graphite bomb can be countered by insulated power cables, and electricity would reboot once the cloud dispersed, meaning it would only be a temporary defense measure against Kim Jong-un’s nuclear threat.]

The South, which is seeking to increase its defensive capabilities against the hermit kingdom, has been eager to develop graphite bombs because they are not lethal to civilians.

The country moved up the deployment of its “three pillars” of defense by about three years as a result of North Korean despot Kim Jong Un’s saber-rattling missile launches, according to the Telegraph.

The three-pronged strategy had been scheduled to be in place by the mid-2020s, but Pyongyang’s increasingly bellicose and unpredictable behavior has forced Seoul to alter that timeline.

The Kill Chain program is designed to detect, identify and intercept incoming missiles in the shortest possible time.

The strategy’s final component is the Korea Massive Punishment & Retaliation plan, under which Seoul will attack leadership targets in the North if it detects signs that the rogue regime is planning to use nukes.

Tensions have soared as Kim has [continued to defy the UN, launching numerous missile tests in violation of the UN]. He has traded bombastic threats with President Trump, who tweeted Saturday that “only one thing will work” to tame Pyongyang.

1. List the following information for South Korea: (see the CIA World FactBook website for answers)
a) capital:
b) location/the countries that share its borders:
c) the religious breakdown of the population:
d) the type of government:
e) the chief of state (and head of government if different):
f) the population:

3. a) Define graphite and pre-emptive strike as used in the article.
b) What is a blackout bomb? How does it work?
c) Why is it often referred to as a “soft bomb”?

4. a) When/where have blackout bombs been used in the past? How effective were they?
b) Why do analysts think blackout bombs will be effective in North Korea? Be specific.
c) What is the drawback to the effectiveness of this “soft bomb”?

6. Ask a parent: what do you think of this as a pre-emptive strategy? Should South Korea use it now, or wait? If wait, until when? Please explain your answer.

A graphite bomb (also known as the “Blackout Bomb” or the “Soft Bomb”) is a non-lethal weapon used to disable electrical power systems. Read more at wikipedia.

The term kill chain was originally used as a military concept related to the structure of an attack; consisting of target identification, force dispatch to target, decision and order to attack the target, and finally the destruction of the target. Conversely, the idea of “breaking” an opponent’s kill chain is a method of defense or preemptive action.

A new American military contingency plan called “Kill Chain” is reportedly the first step in a new strategy to use satellite imagery to identify North Korean launch sites, nuclear facilities and manufacturing capability and destroy them pre-emptively if a conflict seems imminent. The plan was mentioned in a joint statement by the United States and South Korea. (from wikipedia)