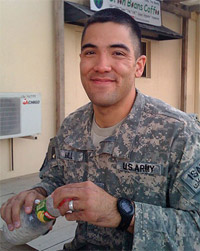 (by Lynn Vincent, WorldMag.com) – A West Point graduate with a degree in environmental engineering, Capt. Roger Hill was by all accounts an up-and-coming young officer. He had completed the Army’s punishing Airborne and Ranger schools, earned three Army Commendation medals and, during a 12-month combat tour in Iraq, received a Bronze Star for meritorious service. His fitness reports reflected a dedicated leader whose superiors wrote ringing recommendations for promotion.

The men who served under him also showed confidence in his leadership: The reenlistment rate in Dog Company, the high-action combat unit Hill led in Afghanistan, was the highest in the brigade.

But now Hill, 30, is back home in the States awaiting dismissal from the Army, possibly with an other-than-honorable discharge. His case illustrates what embedded journalist P.J. Tobia calls the terror war’s “impossible mission”—and what can happen when the letter of military law clashes with a commander’s duty to protect his men.

Operating from FOB [Forward Operating Base] Airborne with a fluctuating troop strength of 80 to 90 men, Dog Company was the smallest in the brigade. But it was responsible for the entire province of Wardak, an area with half a million people, equal in size to Connecticut and teeming with Taliban.

Wardak is also what the military calls “kinetic,” the Pentagon’s word for a place where lots of people are shooting at each other and blowing things up. During its first six months in the province, Dog Company suffered 30 wounded in action, cutting Hill’s unit by a third.

But the worst came in mid-August: Two of Hill’s men, 1st Lt. Donnie Carwile and Spc. Paul Conlon, died from wounds suffered in a fiery ambush that included an IED explosion and small-arms crossfire.

It didn’t take Hill long to figure out that the Taliban had known they were coming.

Shortly after the attack, Hill obtained intelligence that the ambush was probably the result of an “insider threat.” He suspected that Afghans working on FOB Airborne collaborated with the attackers. Using classified intelligence sources, Hill confirmed his suspicions by “leaking” false intelligence about a new patrol. He sent men to the same location where Carwile and Conlon were killed and just as before, insurgents were waiting for them.

In all, Hill outed a dozen Afghan spies, local nationals working in various jobs around FOB Airborne. One of them turned out to be his personal interpreter, Noori, a trusted aide who had accompanied Dog Company on patrols and even been with them in firefights. Hill and his first sergeant, Tommy Scott, rounded up the suspected Taliban collaborators and took them into custody.

Without knowing it, both had just set a 96-hour stopwatch on their Army careers.

By theater operating rules, that’s how long U.S. forces are allowed to hold enemy Afghans before doing one of two things: transferring them up to battalion-level custody or turning them over to Afghan authorities. Hill immediately ordered his staff to telephone battalion headquarters and brief them on the prisoners.

“They called battalion at least every 12 hours,” but requests to take the Afghans into custody went unheeded, said Hill’s attorney Neal Puckett, a former military trial judge and retired Marine Corps lieutenant colonel now in private practice. “The rules said that if the detainees weren’t picked up by higher authority, they would have to be released. [Dog Company] would have to escort the detainees to the gates of the FOB, give them a couple of bucks, and send them on their way.”

This was a completely unacceptable alternative, in Hill’s view, since the spies knew both FOB Airborne and Dog Company inside-out, and their treachery had just killed two of his men. Neither was turning over the detainees to Afghan authorities an attractive option: The only way to have some assurance that the Afghans would keep them in custody was to give them evidence of criminality. The problem was, the intelligence source Hill used to identify Noori and the others as spies was of a kind not releasable to foreign nationals, even allies.

Meanwhile, more requests to battalion went unanswered. It is possible, Puckett said, that earlier clashes between Hill and battalion commander Lt. Col. Tony DeMartino over support issues accounted for the silence. In any case, the 96-hour clock ticked. As the deadline neared, Hill and Scott faced the possibility of having to release the men who had just helped kill two of their brothers.

Shut out by battalion, Hill and Scott “realized that the only information they could give that would create a higher likelihood that the Afghans would hold the detainees were confessions,” Puckett said.

So they set out to get them.

“It wasn’t the best thought out plan,” said Puckett. “Roger [Hill] and his first sergeant decided to turn Jack Bauer on the detainees.”

The details of that were revealed at an Article 32 hearing held at FOB Afghanistan in early December. Such a hearing occurs when a senior officer—in this case, Lt. Col. Robert Byrd, a military police officer—is appointed to investigate whether there is sufficient evidence to warrant further proceedings against a defendant, such as a court-martial.

Both sides put on evidence in the case. Then it was up to Byrd to weigh the evidence and make a recommendation on Hill’s future.

The Army presented evidence that under Hill’s command, 1st Sgt. Scott straddled the chest of at least one bound detainee as he lay on the ground and slapped the detainee in the face while shouting questions at him. The Army also showed that while Scott held several detainees in the FOB coffee house, Hill, standing outside with other detainees, fired his handgun into the ground about 20 yards away from the nearest prisoner, in effect performing a mock execution in order to scare the detainees inside into confessing.

At least one did, according to Puckett. Two separate medical exams showed that none of the detainees was injured.

According to Puckett, the Army characterized Hill and Scott’s actions as war crimes—assault with a dangerous weapon and inflicting psychological harm on the detainees—in violation of the Geneva Conventions. Lt. Col. Byrd was not available for an email or telephone interview, and the Army declined WORLD’s request to interview any command representative familiar with the case and able to speak on the record.

Puckett argued that Hill’s actions, particularly given his sterling service record, were a lapse in judgment and not a criminal act. “I’m sure that the recent loss of Carwile and Conlon had an emotional impact on their decision-making,” Puckett told WORLD.

There was no chance, Puckett said, that the Army would simply release Hill and his men unpunished. So, after the Article 32 hearing, with the possibility of a court-martial and federal felony convictions looming, Puckett went to see Lt. Col. Patrick Huston, a legal advisor to the commanding general in the case. Would it be possible, Puckett asked, to reduce the charges against Hill so that he would be eligible for what the Army calls non-judicial punishment, such as a letter of reprimand and forfeiture of pay?

No, Huston said. The more likely outcome would be prison time—and an other-than-honorable discharge was near certain. Meanwhile, Huston said the brigade was waiting for Lt. Col. Byrd’s final report.

But less than a week later, Puckett received an urgent email from Huston, who wrote that if Puckett and his client acted quickly, they could get the reduction in charges after all.

Given the alternative, Hill took the deal. Even today, though, neither he nor Puckett has seen Lt. Col. Byrd’s final report on the Article 32 hearing. “We’ve asked several times and have been denied it. Byrd said it was sealed and he was told by brigade that he couldn’t release it to anyone else.” Puckett said Byrd also would not tell him what his report had recommended.

“There’s no good reason to deny us access to that report unless . . . it is contrary to what the brigade expected it to be,” Puckett said. “We really put the battalion on trial in their shortcomings and lack of support to Roger’s company.”

Soon, a new unit of nearly 1,200 soldiers will move to FOB Airborne, taking over responsibility for the violent province previously held by Hill’s 90-man unit.

The 12 Taliban spies were released.

1. What type of military record does Captain Roger Hill have?

2. How many men were in Captain Hill’s Dog Company? How many were wounded in the first six months in action?

3. What did Captain Hill learn about the ambush in which two of his men were killed (1st Lt. Donnie Carwile and Spc. Paul Conlon)? Explain how Capt. Hill confirmed this information.

4. What was the problem with taking the suspected Taliban collaborators into custody? Why didn’t Capt. Hill follow procedure and transfer the suspects to battalion-level custody, turn them over to Afghan authorities or release them?

5. Capt. Hill and Sgt. Scott believed that since their battalion headquarters would not acknowledge their request to take the detainees into custody, their only option for justice was to get a confession from the suspects so that Afghan authorities would hold them. What interrogation methods did Capt. Hill and his 1st Sgt. Tommy Scott use to obtain a confession from the detainees?

6. The army characterized Hill and Scott’s actions as war crimes – assault with a dangerous weapon and inflicting psychological harm on the detainees – in violation of the Geneva Conventions. Capt. Hill’s attorney Neal Puckett argued that Hill’s actions, particularly given his sterling service record, were a lapse in judgment and not a criminal act. What do you think?

7. Re-read para. 24-30. Do you think justice was served in this case? Explain your answer.