RIYADH – Saudi authorities have re-arrested an activist who defied a ban on female drivers in the kingdom, a security official said Monday.

Manal al-Sherif was accused of “violating public order” and ordered held for five days while the case is investigated, the official said.

Al-Sherif launched a campaign against the longtime ban last week by posting a video clip on the Internet of herself behind the wheel in the eastern city of Khobar.

Through Facebook, the campaigners set June 17 as the day all women should drive their cars. The page, called “Teach me how to drive so I can protect myself,” was removed after more than 12,000 people indicated their support for the call. The campaign’s Twitter account also was deactivated.

Al-Sherif was detained for several hours on Saturday by the country’s religious police and released after she signed a pledge agreeing not to drive.

A security official said al-Sherif was re-arrested Sunday at dawn. The official spoke on condition of anonymity because he was not authorized to speak to the media.

Khobar prison chief Ayoub ben Nahit was quoted as saying in the daily Al-Watan that al-Sherif faces accusations of “violating the rules and the system by driving her car, roaming the streets of the province.”  He also accused her of “inciting public opinion” by posting the video clip. …..

Saudi Arabia is the only country in the world that bans women – both Saudi and foreign – from driving. The prohibition forces families to hire live-in drivers, and those who cannot afford the $300 to $400 a month for a driver must rely on male relatives to drive them to work, school, shopping or the doctor.

Women are also barred from voting, except for chamber of commerce elections in two cities in recent years, and no woman can sit on the kingdom’s Cabinet. Women also cannot travel without permission from a male guardian and shouldn’t mingle with males who are not their husbands or brothers. 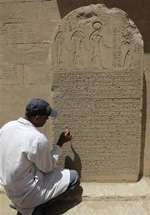 CAIRO – The tombs of seven men, including several who served King Tutankhamen and his father, the pharaoh Akhenaten, were opened to tourists on Monday after restoration.

The area served as the necropolis [cemetery] for the ancient Egyptian capital at Memphis.

Hawass noted that two of the men who built tombs for themselves–Maya, the treasurer of King Tutankhamen, also known as King Tut–and Horemheb, a general under King Tut who later became king himself, “were very important men during one of Egypt’s most tumultuous periods.” …..

Under King Tut, “Maya was responsible for restoring order in Egypt, while his colleague Horemheb restored order abroad,” the antiquities ministry said in a statement.

A tomb built for Meryneith, who was temple steward under Akhenaten, was of mudbrick encased in limestone blocks. A scene on a rear wall shows metal workers plying their trade.

Other tombs were built for Ptahemwia, who was the royal butler to both Akhenaten and King Tut; Tia, a top official under Ramses II who ruled from 1303-1213 B.C.; and Pay and his son, Raia. Pay was the overseer of the harem under King Tut, and Raia was a soldier who later took over his father’s post.

Some of these tombs were first discovered in 1843 by German explorer Richard Lepsius, but were not fully excavated until an Anglo-Dutch mission began excavating there in 1975. Now a Dutch team from Leiden University excavates at the site and has been restoring the tombs. 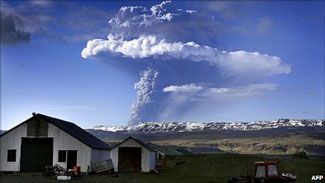 REYKJAVIK – Iceland closed its main international airport and canceled all domestic flights Sunday as a powerful volcanic eruption sent a plume of ash, smoke and steam 12 miles into the air.  [Photo: Grimsvotn – Iceland’s most active volcano.]

The eruption of the Grimsvotn volcano was far larger than one a year ago at another Icelandic volcano that upended travel plans for 10 million people around the world, but scientists said it was unlikely to have the same widespread effect.

“[It was] much bigger and more intensive than Eyjafjallajokull,” the volcano whose April 2010 eruption shut down airspace across Europe for five days, he said.

“There is a very large area in southeast Iceland where there is almost total darkness and heavy fall of ash,” he said. “But it is not spreading nearly as much. The winds are not as strong as they were in Eyjafjallajokull.”

He said this ash is coarser than last year’s eruption, falling to the ground more quickly instead of floating vast distances.

The ash plunged areas near the volcano in southeast Iceland into darkness Sunday and covered buildings, cars and fields in a thick layer of gray soot. Civil protection workers urged residents to wear masks and stay indoors. …..

(The news briefs above are from wire reports and staff reports posted at BostonHerald.com and San Jose mercurynews.com on May 23rd and WashingtonTimes.com on May 22nd.)

2. For Saudi Arabia:
a) list the who, what, where and when of the news item
b) In addition to driving, what other activities are women prohibited from doing in Saudi Arabia?

3. For Egypt:
a) list the who, what, where and when of the news item
b) What group completed the excavation and restoration of the tombs at New Kingdom?
c) Why do you think the Egyptian government permits foreign archeologists to excavate/restore their historic sites?

4. For Iceland:
a) list the who, what, where and when of the news item
b) The eruption of Grimsvotn is much bigger and more intensive than the eruption of Eyjafjallajokull, the volcano whose April 2010 eruption shut down airspace across Europe for five days and affected travel plans of 10 million people around the world. Why then isn’t Grimsvotn’s eruption expected to cause nearly the same interruption to air travel across Europe?

ICELAND: Watch a video of the Grimsvotn volcano erupting: