News from the EU, Israel and Denmark 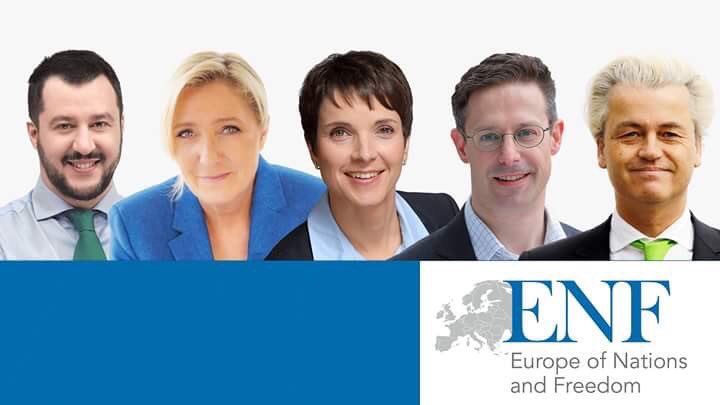 THE EUROPEAN UNION – Emboldened by Brexit vote and hoping to ride the wave of Trump’s victory, European rightists believe their time has come

(excerpted from articles by Soeren Kern at Gatestone Institute and Michelle Fitzpatrick for Agence France-Presse) – Inspired by the election of U.S. President Donald Trump, the leaders of Europe’s main anti-establishment parties have held a rally aimed at coordinating a political strategy to mobilize…voters in upcoming elections in Germany, the Netherlands and France.

Appearing together in public for the first time, leaders gathered on January 21 at a rally in Koblenz, Germany, where they called on European voters to participate in a “patriotic spring” to topple the European Union, reassert national sovereignty and secure national borders. Leaders who spoke included: The leaders of Europe’s main anti-establishment parties appearing together in public for the first time, on January 21 in Koblenz, Germany. (Image source: Marine Le Pen/Twitter)

Referring to the June 2016 passage of BREXIT – the decision by British voters to leave the European Union – and the election of President Donald Trump in the United States, France’s Le Pen said:

“…We are experiencing the return of nation-states. 2016 was the year the Anglo-Saxon world woke up. 2017, I am sure, will be the year in which the peoples of the European continent rise up.”

“…Europe is changing. It started last year with Brexit, yesterday there was Trump and today the freedom-loving parties gathered in Koblenz are making a stand. …The people of the West are awakening. They are throwing off the yoke of political correctness.”

Polls indicate that the…change [in U.S. leadership] is fueling support for [nationalist] parties in Europe. In addition to anger over eroding sovereignty, a growing number of Europeans are rebelling against decades of government-imposed multiculturalism, politically correct speech codes and mass migration from the Muslim world.

Europe’s establishment parties, far from addressing the concerns of ordinary voters, have tried to silence dissent by branding naysayers as xenophobes, Islamophobes and neo-Nazis.

“The aim is to talk about freedom for Europe and for Europeans. Let us break free from the EU’s straitjacket and from globalization,” Ludovic de Danne, an adviser to Le Pen, told AFP.

(by Nathan Giannini Yahoo Finance) – Deep in Israel’s Negev Desert construction is well under way on what will soon become the tallest solar tower in the world. Scheduled to be finished later this year at a cost of about $570 million, the Ashalim tower will soar a staggering 820 feet into the sky.

The tower is surrounded by more than 50,000 heliostat solar mirrors, covering an area the size of 560 football fields. The mirrors reflect the sun’s rays back onto the giant structure, heating water stored in a boiler at the top of the tower, turning it into steam. The steam then spins a turbine and generates energy. The tower will provide enough energy for 130,000 households, or about 5 percent of the country’s population, according to Israel’s Electricity Authority.

Israel has traditionally relied on fossil fuels for energy — renewable sources currently account for just 2.5 percent of the country’s electricity. The Ashalim tower is part of a push to increase that mark to 10 percent by 2020.

The tower is not without its critics, who have panned the project as too expensive and complex to be replicated. Planners argue just the opposite.

“We multiplied the size of the mirrors by three compared to the previous generation,” Megalim Power  CEO Eran Gartner, who heads the consortium managing the project, told the Times of Israel. “Everything is connected by WiFi instead of by cables. The tower and its boiler are also designed to reduce costs. Everything is done to pursue profitability.”

The current tallest solar structure in the world is the Ivanpah plant, located in California’s Mojave Desert. It consists of three towers standing a paltry-by-comparison 459 feet tall.

DENMARK – Country to join fight against Islamic State in Syria

(by Ed Adamczyk, UPI) – The mandate of Denmark’s military forces in Iraq was extended Friday, allowing troops to venture into Syria to combat terrorists. The action was not unexpected. In 2015 Danish Defense Minister Peter Christiansen pledged to accelerate efforts of Denmark’s special forces, working within NATO, against the Islamic State in the Middle East. The decision can also be seen as a response to U.S. President-elect Donald Trump, who has asked all NATO countries to become more engaged in the fight against IS. Denmark joined the international coalition in Iraq in 2014.

Danish Foreign Minister Anders Samuelson said Friday that Denmark’s involvement in the Middle East is “an important foreign affairs and security priority for the government. The government has thus decided, on the basis of specific requests from the coalition, to expand the missions of the special operations troops in Iraq and Syria.”

A majority of Denmark’s parliament supports the plan.

The Danish military has thus far restricted itself to construction projects and to training Iraqi forces. In December, Danish troops were given a mandate to return fire if fired upon. The new directives also permit the Danish warship Peter Willemoes to sail alongside U.S. aircraft carriers. (The news briefs above are from wire reports and staff reports posted at Times of Israel/AFP on Jan. 19 [EU], YahooFinance on Jan. 9 [Israel], UPI on Jan. 20 [Denmark].)

2. For THE EUROPEAN UNION:
a) list the who, what, where and when of the news item
b) List the leaders from various European Union (EU) countries that spoke at the rally.
c) What did they call on voters from their countries to do?
d) The writer explains: “Europe’s establishment parties, far from addressing the concerns of ordinary voters, have tried to silence dissent by branding naysayers as xenophobes, Islamophobes and neo-Nazis.”
They are also referred to as “far-right” “nationalist” as negative labels. A nationalist is defined by Oxford as: a person who advocates political independence for a country: a person with strong patriotic feelings, especially one who believes in the superiority of their country over others. Do you think the “nationalists” will win in upcoming elections in their respective countries? Explain your answer.
Ask a parent the same question.

3. For ISRAEL:
a) list the who, what, where and when of the news item
b) How tall is the tower? Why is it so tall? (see video under “Resources” for answer)
c) What percent of Israel’s renewable energy needs will this solar tower produce?
d) Define subsidized. What is the aim of constructing this tower that does not make a profit, but needs government subsidies to be constructed and operate? (see video under “Resources” for answer)
e) Do you support government subsidies for solar energy in the U.S.? Explain your answer.

4. For DENMARK:
a) list the who, what, where and when of the news item
b) For what reasons did the Danish government make this decision?

THE EUROPE OF NATIONS AND FREEDOM (ENF) is a group established in June 2015 by Members of the European Parliament from nine counties to oppose European federalism and the transfer of political power from voters to unelected bureaucrats in Brussels, the EU’s capital. Visit the website: Europe of Nations and Freedom (ENF)