News from Spain, Dubai and Japan 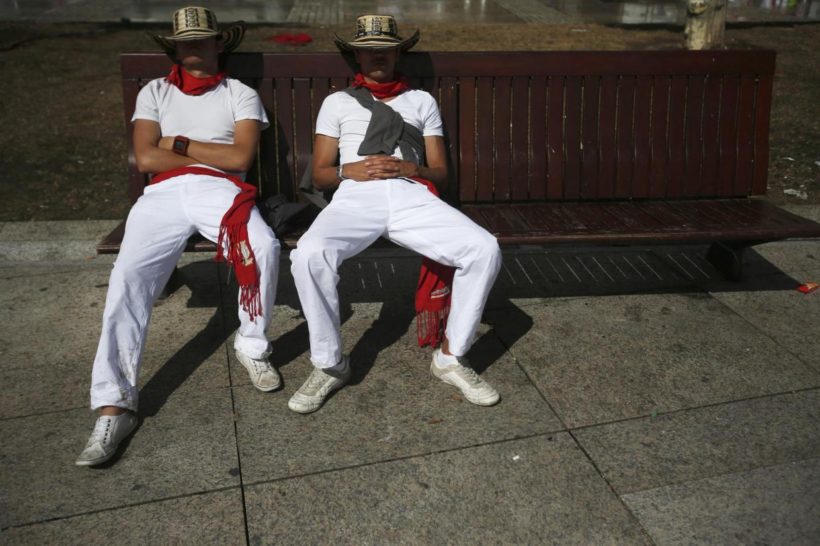 Revellers sleep on a bench after the second running of the bulls during the San Fermin festival in Pamplona.

A typical Spanish worker now checks in at about 10 a.m., takes a two-hour mid-afternoon snooze, and then clocks out around 8 p.m.

But center-right Prime Minister Mariano Rajoy wants to get rid of nap-time, and make Spain more like its European counterparts.

“I will find a consensus to make sure the working day ends at 6 p.m.,” declared Rajoy.

The Spanish siesta has been in place for centuries, since before the Industrial Revolution when workers needed an hours-long break to take cover from the day’s hottest hours.

But Spanish workers’ average productivity is much lower than in places such as Germany, a Spanish parliamentary commission said in a 2013 report. [“We need more flexible working hours, to cut our lunch breaks, to streamline business meetings by setting time limits for them, and to practice and demand punctuality,” the report read.] Over the years, modern Spaniards across the political spectrum have pushed Madrid to align their workday with other European nations.

Rajoy’s support is seen as an attempt to curry favor with voters ahead of the general election in June, the Independent reported.

The move could have a widespread impact on all Spanish life. Prime-time television now runs from 10 p.m. to 2 a.m. in Spain. Midweek soccer matches, in Spain’s La Liga, typically kick off at 8:30 p.m.

Even though Spain is directly south of England, it’s been an hour ahead of GMT for more than seven decades.

The time change dates to 1942 when Generalissimo Francisco Franco ordered the nation’s clocks put forward in a symbol of unity with Nazi Germany.

[The mid-day siesta harks back to a time when Spain was an agricultural economy and workers struggled to work at the hottest time of the day, with temperatures rising to 104F.  These days, though, the majority of Spanish work indoors where air-conditioning is commonplace.]

(Gulf News) Dubai: Drones are set to become the new inspectors, as Dubai Municipality has confirmed that it will use unmanned aerial vehicles to catch litterbugs red-handed.

The municipality’s Waste Management Department has already purchased one drone as part of its trial phase, and according to officials, has so far yielded positive results. “Since they are very cost effective, we expect to have two more drones later this year, which will carry out inspections across deserts and beaches,” Abdul Majeed Al Saifaie, director of the Waste Management Department, told Gulf News on Monday.

“We initially purchased the drone to monitor the landfill sites at Al Ghusais, Jebel Ali and Al Warsan, because as per regulations, they are allowed to reach up to 30 metres high,” he said.

“In this way, we save money and time as the inspectors do not have to drive around and also, the drones can reach up to places that our employees cannot get to,” he said.

However, the drones will not be restricted to monitoring dumpsites and development projects but are also set to inspect Dubai’s beaches and deserts against offenders guilty of leaving their rubbish behind.

“As the good weather is expected to stay for at least another month, we expect a lot of people to camp in the desert until the end of April, and to also set up barbeques at beaches,” he said.

Once the drones are up and running, Al Saifaie explained that they will monitor popular campsites, in addition to trucks that dump their waste illegally.

“The main beneficial factor is the amount of time these drones can save. Instead of having municipality inspectors driving across the city, the drones will be able to fly directly to a number of different locations within a short time, and provide us with data and high-resolution photographs,” he said.

The footage will then be used to fine litter bugs.

JAPAN – Fingerprints to be tested as ‘currency’

(The Yomiuri Shimbun [The Japan News]) — Starting this summer, the government will test a system in which foreign tourists will be able to verify their identities and buy things at stores using only their fingerprints.

The government hopes to increase the number of foreign tourists by using the system to prevent crime and relieve users from the necessity of carrying cash or credit cards. It aims to realize the system by the 2020 Tokyo Olympic and Paralympic Games. The experiment will have inbound tourists register their fingerprints and other data, such as credit card information, at airports and elsewhere.

Tourists would then be able to conduct tax exemption procedures and make purchases after verifying their identities by placing two fingers on special devices installed at stores.

The Inns and Hotels Law requires foreign tourists to show their passports when they check into ryokan inns or hotels.

The government plans to substitute fingerprint authentication for that requirement.

A total of 300 souvenir shops, restaurants, hotels and other establishments will participate in the experiment. They are located in areas that are popular among foreign tourists such as Hakone, Kamakura, Yugawara in Kanagawa Prefecture, and Atami in Shizuoka Prefecture. The government plans to gradually expand the experiment by next spring, to cover areas including tourist sites in the Tohoku region and urban districts in Nagoya. It hopes to realize the system throughout the country, including Tokyo, by 2020.

Introducing the system is part of the government’s efforts to increase the annual number of foreign tourists to 40 million by 2020.

It is also aiming to demonstrate the country’s advanced technology by having tourists use the system when they visit Japan for the Tokyo Olympics and Paralympics.

(The news briefs above are from wire reports and staff reports posted at the NY Post on April 4, GulfNews .com on April 4 and Japan News on April 8.)

2. For SPAIN:
a) list the who, what, where and when of the news item
b) What is the purpose of the Spanish siesta? (Why was it established?)
c) This report implies that Prime Minister Rajoy’s motive for eliminating the siesta is only self-serving – as a way to gain votes in the upcoming election. But others have been calling for the elimination of the siesta for a while. Regardless of the prime minister’s motive, a Spanish parliamentary commission said in a 2013 report that Spanish workers’ average productivity is much lower than in places such as Germany. Do you think this fact should affect the decision to eliminate the traditional siesta? Explain your answer.

3. For UNITED ARAB EMIRATES (UAE) – Dubai is one of the United Arab Emirates (see “Background” below for more info)
a) list the who, what, where and when of the news item
b) What is the benefit of using drones for these purposes?
c) How will the municipality use the drone footage?
d) Do you think U.S. towns, cities and/or states should begin a similar program? Why or why not? – consider the pros and cons. Explain your answer.

4. For JAPAN:
a) list the who, what, where and when of the news item
b) What is the purpose of the fingerprint system?
c) When does the government aim to have the system fully operational?
d) How will the system work?
e) Do you think we should have a nationwide fingerprint system in the U.S. similar to Japan’s? Why or why not – consider the pros and cons. Explain your answer.

Rules for individual drone use in Dubai prohibit the use of drones at night, near buildings, people or near airports. Commercial drone use is still not allowed.

Since April 2015, flying drones fitted with cameras in residential areas is a punishable offense as per the Federal Criminal Code.

Rules for individual use of drones in Dubai:

The United Arab Emirates (UAE) is a federation formed in 1971 by seven emirates known as the Trucial States: Abu Dhabi (the largest), Dubai, Sharjah, Ajman, Fujairah, Ras al-Khaimah, and Umm al-Qaiwain. In addition to a federal president and prime minister, each emirate has a separate ruler who oversees the local government. (read more about Dubai at wikipedia)

The United Arab Emirates (UAE) is a federation seven emirates which are individual states, all ruled by emirs. (An emirate is a nation/territory ruled by an emir.)  Founded between the 7th and 8th centuries, the Trucial States granted the United Kingdom control of their defense and foreign affairs in treaties signed in the 19th century.  In 1971, six of these states merged to form the United Arab Emirates (UAE):

In addition to a federal president and prime minister, each emirate has a separate ruler who oversees the local government.

The relative political and financial influence of each emirate is reflected in the allocation of positions in the federal government.

The UAE has no political parties. The rulers hold power on the basis of their dynastic position and their legitimacy in a system of tribal consensus.

Rapid modernization, enormous strides in education, and the influx of a large foreign population have changed the face of the society.
(from the U.S. State Dept website at state.gov)

The United Arab Emirates (UAE) is an important oil producer with the fifth largest proven oil reserves in the Middle East. The UAE is a member of the Organization of the Petroleum Exporting Countries (OPEC) since joining in 1967. The emirate of Abu Dhabi is the center of the oil and gas industry, followed by Dubai, Sharjah, and Ras al Khaimah. In 2004, natural gas supplied 64 percent of the country’s total energy consumption, and oil supplied the remaining 36 percent. (from the U.S. Dept of Energy website at eia.doe.gov)