News from Russia, Burundi and Germany 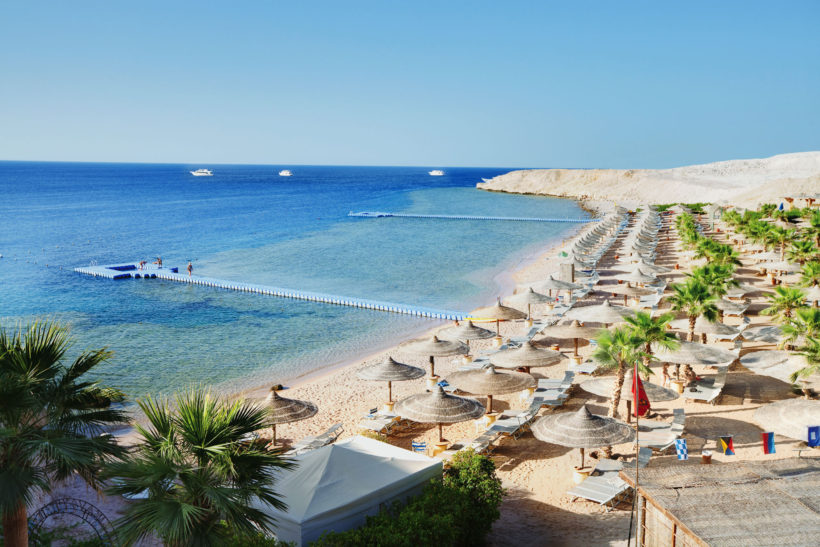 (Savoy Hotel, Sharm el-sheikh.) Sharm el-Sheikh, popularly known simply as "Sharm”, is a well-known port and resort town at the southern tip of the Sinai Peninsula in Egypt.

Moscow acknowledged Monday for the first time a terrorist attack could have caused the October 31 Russian plane crash in Egypt, as thousands more tourists were evacuated from the country.

“The possibility of an act of terror is of course there as the reason for what happened,” Russia’s Prime Minister Dmitry Medvedev admitted in an interview with Rossiyskaya Gazeta state newspaper.

Britain and the United States, as well as international investigators, suspect a bomb exploded on board the Metrojet A-321 plane, but Egyptian officials insist there is no evidence yet of an attack on the aircraft which jihadists claim to have downed.

Russia had also refrained from blaming the crash, which killed all 224 people on board, on terrorists, although President Vladimir Putin on Friday suspended all flights to Egypt.

Israel, which has strong intelligence links to the neighbouring Sinai where the Airbus came down while en route from Egypt’s resort of Sharm el-Sheikh to Saint Petersburg, also sided with the attack theory. “There is a strong probability that this is an attack,” Defence Minister Moshe Yaalon told Israeli reporters on Monday.

“From what we know and what we understand, I would be surprised if it turns out that it was not an attack.”

And the head of Airbus said no technical fault has yet been detected for the crash of the A-321.

“I can say that so far, what we got from the investigation didn’t trigger any action, technical action on our side, regarding the A-321 fleet,” said Fabrice Bregier, the European manufacturer’s chief executive officer. “But we need to wait for the conclusion of the investigations,” Bregier said at the Dubai Airshow.

Amid the tourist exodus from Egypt, a senior operative of the Islamic State jihadist group, Ashraf Ali Ali Hassanein al-Gharabli, was shot dead in an exchange of fire in Cairo after police tried to arrest him, the interior ministry said. Tourists queue up at check-in counters at the airport of Egypt’s Red Sea resort of Sharm El-Sheikh on November 6, 2015. Britain moved to repatriate thousands of tourists from Egypt’s Sharm el-Sheikh after warnings a “terrorist bomb” may have brought down a Russian jet that took off from the resort, as several nervous airlines scrapped their flights. (AFP/Mohamed el-Shahed)

The IS group’s branch in the Sinai claimed responsibility after the Russian plane crash.

Tens of thousands of foreign tourists, including some 80,000 Russians and 20,000 Britons, were stranded in the resort after flights were cancelled over security fears.

Moscow said Monday that about 25,000 Russian tourists had so far returned, on more than 100 flights, while Prime Minister David Cameron’s office said some 5,000 Britons had returned home.

BARUNDI – President orders citizens to give up guns

President Pierre Nkurunziza set a Nov. 7 deadline on Monday, November 2 for Burundians to hand over illegal firearms or risk being “dealt with as enemies of the nation,” after months of protests over his re-election in July and a failed coup.

Burundi, which emerged from civil war a decade ago, was thrown into turmoil over Nkurunziza’s plan to seek a third term in office, which many of his critics said was unconstitutional. [Critics argued the move was illegal due to the two-term limit outlined in the country’s constitution, which was established in 2005 after a decade-long civil war. The nation’s high court ultimately cleared Nkruniziza to run again, determining that it was legal because he had been appointed to his first term rather than democratically elected.]

The bid, which Nkurunziza ultimately won by 70% in a disputed vote, plunged the country into crisis, including violent clashes between protesters and security forces in the capital Bujumbura and a series of targeted killings.

Experts say “tit-for-tat” assassinations of government officials and members of the opposition risk driving the nation back into another conflict and could reopen old ethnic wounds. Burundi lies next to Rwanda, scene of a 1994 genocide. Burundi’s President Pierre Nkurunziza is seeking a third term, despite the constitution limiting the president to two. (Reuters)

In last Monday’s address to the nation, Nkurunziza said people had five days to voluntarily give up their guns.

“Those who will not do so… will be taken as criminals and be prosecuted according to the anti-terrorism law and be dealt with as enemies of the nation,” Nkurunziza said. “This is the last call we make.”

He said that individuals who comply will “be trained on patriotic education” and returned to their families.

Nkurunziza also called on police to restore peace and security across the capital Bujumbura within a month.

“In addition, you are allowed to use all the necessary means and authorized rules and regulations in security matters,” he said.

The influx of more than one million asylum seekers from Africa, Asia and the Middle East is placing unprecedented strain on Germany’s healthcare system. Hospitals, clinics and emergency rooms across Germany are being filled to capacity with migrants suffering maladies of all kinds, and medical personnel, including thousands of volunteers, are increasingly complaining of burnout.

Diseases are also reappearing that have not been seen in Germany for years. German public health officials are now on the lookout for Crimean Congo hemorrhagic fever, diphtheria, Ebola, hepatitis, HIV/AIDS, malaria, measles, meningitis, mumps, polio, scabies, tetanus, tuberculosis, typhus and whooping cough. As refugee shelters fill to overflowing, doctors are also on high alert for mass outbreaks of influenza and Norovirus.

Compounding the challenge, tens of thousands of migrants arriving in Germany – particularly migrant children – have not been immunized, and German doctors are finding that needed vaccines are not readily available due to a lack of supply. …

Many migrants are also suffering from a host of traumas and mental illnesses. According to the Chamber of German Psychotherapists (Bundespsychotherapeutenkammer), at least half of all migrants arriving in Germany have…problems, including post-traumatic stress disorder and depression….

German hospitals are also being forced to hire a virtual army of interpreters so that doctors can communicate with asylum seekers, who speak dozens of languages, dialects and variants.

At the same time, German hospitals are increasing security to protect doctors and nurses from violent attacks by migrants who are unhappy with the medical treatment they are receiving.

Many say the German government failed fully to consider the unforeseen consequences of opening the door to so many migrants. In addition to the massive economic and social costs, as well as the burden of increased crime…, Germans are now facing the risk of being exposed to exotic diseases.

German media outlets are downplaying the extent of the healthcare problem, apparently to avoid spreading fear or provoking anti-immigrant sentiments. But a growing number of German healthcare professionals are sounding the alarm.

…Max Kaplan, director of the Bavarian Medical Board (Bayerische Landesärztekammer), says that the challenges associated with medical treatment for migrants are exacerbated by language and cultural barriers, which are “tiresome, time consuming and sometimes impossible to overcome.” He says many Muslim women refuse to be treated by male doctors, and many Muslim men refuse to be treated by females. … (SEE “Background” under questions for more.)

(The news briefs above are from wire reports and staff reports posted at Agence France-Presse (AFP) on Nov. 9, Reuters on Nov. 7 and Gatestone Institute on Nov. 8.)

2. For RUSSIA:
a) list the who, what, where and when of the news item
b) AFP further reports:

The crash has raised fears for Egypt’s vital tourism industry, which had already been suffering from years of unrest. Derek Moore, chairman of the Association of Independent Tour Operators, told AFP that concerns over a bomb could dissuade British tourists from visiting during the peak season. “Even offering rock-bottom prices will not achieve that if there is a feeling that a trip to Sharm might result in death,” he said.

Local tourism chiefs say Sharm is secure. “Sharm is safe. There is no problem inside Sharm el-Sheikh,” said Givara el-Gafy, head of the south Sinai tourism chamber.
With whom would you agree? Explain your answer.
c) If it is proved that Islamic terrorists did indeed plant the bomb that destroyed the Airbus, killing all 224 people aboard, how should Egypt respond? How should Russia respond? What reaction should the EU or U.S. have?

3. For BURUNDI:
a) list the who, what, where and when of the news item
b) What consequences do citizens face for not turning in their guns in Burundi?
c) What do you think will happen when a country’s leader forces all citizens to “voluntarily” give up their guns?

4. For GERMANY:
a) list the who, what, where and when of the news item
b) List the problems German doctors and health officials say are occurring due to the huge influx of migrants.
c) This report from U.S. think tank Gatestone Institute relates: “German media outlets are downplaying the extent of the healthcare problem, apparently to avoid spreading fear or provoking anti-immigrant sentiments. But a growing number of German healthcare professionals are sounding the alarm.”
What do you think is the role of the media: informing citizens in a responsible way to the impending healthcare crisis caused by the acceptance of millions of migrants, or keeping it quiet in an effort to prevent panic or anti-immigrant feelings? Explain your answer.
d) Do you think the German media’s efforts to not report this growing health care crisis will succeed? Explain your answer.
e) It is right to have compassion fot others. Do you think the German government’s handling of the “migrant” crisis is the most compassionate way to deal with the situation – for the migrants and for the German people? Explain your answer.

Burundi’s first democratically elected president was assassinated in October 1993 after only 100 days in office, triggering widespread ethnic violence between Hutu and Tutsi factions. More than 200,000 Burundians perished during the conflict that spanned almost a dozen years. Hundreds of thousands of Burundians were internally displaced or became refugees in neighboring countries. An internationally brokered power-sharing agreement between the Tutsi-dominated government and the Hutu rebels in 2003 paved the way for a transition process that integrated defense forces, and established a new constitution and elected a majority Hutu government in 2005. (from CIA World FactBook)

Burundians Flee Homes Ahead of Deadline to Surrender Guns