News from Japan, Vietnam and Iran 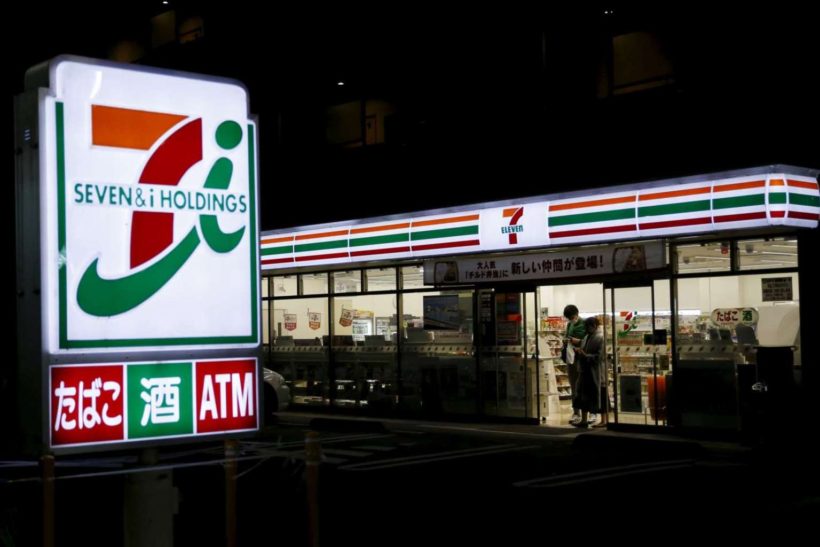 Police suspect more than 100 members of an international crime syndicate were behind the meticulously planned robbery, which took place in the early hours of May 15 before banks had opened, according to Kyodo News.

Cash was withdrawn almost simultaneously across Tokyo and 16 other prefectures [similar to a county] using as many as 1,600 counterfeit credit cards containing account information stolen from the South African institution Standard Bank.

The suspects reportedly withdrew cash from ATMs inside 1,400 7-Eleven convenience stores, with each transaction totaling 100,000 yen ($909), the cash machine limit. The bank said the heist could cost it as much as $19 million.

Japanese police are believed to have started the painstaking process of checking security cameras in each of the convenience stores in a bid to identify the culprits involved.

Interpol is also helping Japanese police to co-ordinate with the South African authorities and identify anyone who might have leaked credit card information, sources told Kyodo News. The raids are believed to have started early in the morning when banks were closed, buying suspects more time to leave the country before police investigated the crime according to the Yomiuri newspaper.

Ross Linstrom, a spokesman for Standard Bank, which is one of South Africa’s largest financial services groups, confirmed that it had been the “victim of a sophisticated, co-ordinated fraud incident” but insisted none of its customers had been affected.

“This involved the withdrawal of cash using a small number of fictitious cards at various ATMS in Japan,” he said.

The incident is the latest in a string of increasingly sophisticated ATM robberies involving fake credit cards across the globe.

One such incident reportedly involved a pair of heists totaling around $45.3 million, after cyber thieves disabled withdrawal limits on ATMs around the world.

There is little that customers can do to protect themselves in the event of such attacks.

Dr. Steven Murdoch, a security researcher at University College London, said: “It looks like something has gone wrong at one or both banks and there’s not really anything the customer can do to protect themselves.”

The South African authorities have recently moved to cut credit card fraud involving its banks such as rolling-out chip and pin technology and tightening up internal fraud-check systems. …

(London’s Daily Telegraph) – President Obama on Monday announced he is lifting a 50-year old arms embargo on communist Vietnam in a historic signal of warming relations between the former enemies.

The move was unveiled by Mr. Obama on a visit to Hanoi as the two countries face the shared challenge of Chinese aggression in the South China Sea. President Obama was at pains to insist that the lifting of the embargo was not linked to Beijing’s belligerence, although few security analysts shared that interpretation.

China’s official reaction was subdued.  “The arms embargo is a product of the Cold War and should never have existed,” said a spokesman. “We welcome normal relations between Vietnam and the United States.”

But Xu Bu, China’s ambassador to the Association of South-East Asian Nations (ASEAN), struck a more confrontational tone. Writing in the Straits Times, he described the US as “dictatorial and overbearing” and dismissed tensions over the disputed seas as “intentionally churned and hyped.”

And human rights campaigners criticized Mr. Obama for lifting the embargo without securing public concessions from Vietnam on its dismal human rights record.

“In one fell swoop, President Obama has jettisoned what remained of US leverage to improve human rights in Vietnam,” said Phil Robertson, deputy Asia director of Human Rights Watch.

On his first visit to Vietnam, the US president announced the end of the ban on sales of lethal weapons at a joint press conference with his counterpart, Communist president Tran Dai Quang. He said the new policy removed a “lingering vestige of the Cold War.” … In return for ending the embargo, the US could be given access for its warships to return to Cam Ranh Bay, the strategic bay where its B-52s once loaded up with bombs to pounds Ho’s forces.

The rapprochement comes as both the US and Vietnam face China’s increasingly aggressive territorial claims in the region’s waters.

But President Obama insisted the end of the embargo was not tied to China’s activities, which have included building military facilities on islands claimed by Vietnam.

“The decision to lift the ban was not based on China or any other considerations, it’s based on our desire to complete what has been a lengthy process of moving towards normalization with Vietnam,” he said. …..

Meanwhile, in the US, some relatives and campaigners want Mr. Obama to focus on another “unfinished business” from the war – the unknown fates of more than 1,600 military servicemen who never returned from the first lost war in the country’s history.

They want the president to demand Vietnam’s help in accounting for missing personnel who may have been captured and killed after being shot down during air raids or died during captivity.

IRAN – Iranian commander: We can destroy Israel ‘in under 8 minutes’

(The Times of Israel) – Ahmad Karimpour, a senior adviser to the Iranian Revolutionary Guards’ elite unit al-Quds Force, announced that if Supreme Leader Ali Khamenei gave the order to destroy Israel, the Iranian military had the capacity to do so quickly.

“If the Supreme Leader’s orders [are] to be executed, with the abilities and the equipment at our disposal, we will raze the Zionist regime in less than eight minutes,” Karimpour said Thursday, according to the semi-official Fars News Agency. A senior Iranian general on May 9 announced that the country’s armed forces successfully tested a precision-guided, medium-range ballistic missile two weeks earlier that could reach Israel, the state-run Tasnim agency reported. [A ballistic missile is a missile that follows a sub-orbital ballistic flightpath with the objective of delivering one or more warheads (often nuclear) to a predetermined target.]

“We test-fired a missile with a range of 2,000 kilometers (1,242 miles) and a margin of error of eight meters [26 feet],” Brigadier General Ali Abdollahi was quoted as saying at a Tehran science conference. The eight-meter margin means the “missile enjoys zero error,” he told conference participants.

Iran in March tested ballistic missiles, including two with the words “Israel must be wiped off the earth” emblazoned on them, according to the US and other Western powers.

Under a nuclear deal signed last year between world powers and Iran, ballistic missile tests are not forbidden outright but are “not consistent” with a United Nations Security Council resolution from July 2015, US officials say. A missile launched from the Alborz mountains in Iran on March 9, 2016, reportedly inscribed in Hebrew, ‘Israel must be wiped out.’ (Fars News)

According to the UN decision, “Iran is called upon not to undertake any activity related to ballistic missiles designed to be capable of delivering nuclear weapons, including launches using such ballistic missile technology,” until October 2023.

Supreme Leader Khamenei has repeatedly threatened to annihilate the Jewish state, and in September 2015 suggested Israel would not be around in 25 years. In a quote posted to Twitter by Khamenei’s official account on September 9, 2015, Khamenei addressed Israel, saying, “You will not see next 25 years,” and added that the Jewish state will be hounded until it is destroyed.

“After negotiations, in Zionist regime they said they had no more concern about Iran for next 25 years; I’d say: Firstly, you will not see next 25 years; God willing, there will be nothing as Zionist regime by next 25 years. Secondly, until then, struggling, heroic and jihadi morale will leave no moment of serenity for Zionists,” the quote from Iran’s top leader reads in broken English.

In November 2014, Khamenei stated that the “barbaric” Jewish state “has no cure but to be annihilated.” A plan titled “9 key questions about the elimination of Israel” was posted on his Twitter account, using the hashtag handsoffalaqsa, in reference to the tensions on the Temple Mount. The sometimes grammatically awkward list explained the how and why of Khomeini’s vision for replacing Israel with a Palestinian state. The first point stated that “the fake Zionist regime has tried to realize its goals by means of infanticide, homicide, violence & iron fist while boasts about it blatantly.” Due to the above, Khomeini argued, “the only means of bringing Israeli crimes to an end is the elimination of this regime.”

(The news briefs above are from wire reports and staff reports posted at London’s Daily Telegraph on May 23 [Japan and Vietnam] and The Times of Israel on May 23.)

PLEASE NOTE: Daily posting and “Answers” emails have ended and will resume September 6. We hope you have an enjoyable summer!
(For previous posts, go to the Tuesday’s World Events archives page.)

2. For JAPAN:
a) list the who, what, where and when of the news item
b) Who do the police believe are behind the thefts?
c) How did the thieves do it?
d) What steps are police now taking?

3. For VIETNAM:
a) list the who, what, where and when of the news item
b) Why are human rights advocates critical of President Obama’s announcement that he is ending the arms embargo against Vietnam?
c) President Obama insisted the end of the embargo was not tied to China’s activities, which have included building military facilities on islands claimed by Vietnam.  Does this insistence make you more or less favorable to the President’s decision to lift the arms embargo? Explain your answer.
d) From the article:

Meanwhile, in the US, some relatives and campaigners want Mr. Obama to focus on another “unfinished business” from the war – the unknown fates of more than 1,600 military servicemen who never returned from the first lost war in the country’s history. They want the president to demand Vietnam’s help in accounting for missing personnel who may have been captured and killed after being shot down during air raids or died during captivity.

Does President Obama have a duty as the commander-in-chief to demand this as a requirement for “normalizing relations” with Vietnam?
e) Ask a parent to answer c) and d) and discuss your answers.

Consider Iran’s actions against U.S. sailors who accidentally sailed into Iranian waters, their recent threats to our longtime ally Israel, the only democracy in the Middle East and Ben Rhodes’ revelations about how the Obama administration conducted the nuclear deal negotiations.
What do you think: Is this all part of how foreign diplomacy and negotiations work, or was it wrong to drop economic sanctions against Iran in the hope that they will end their pursuit of nuclear weapons? Explain your answer.