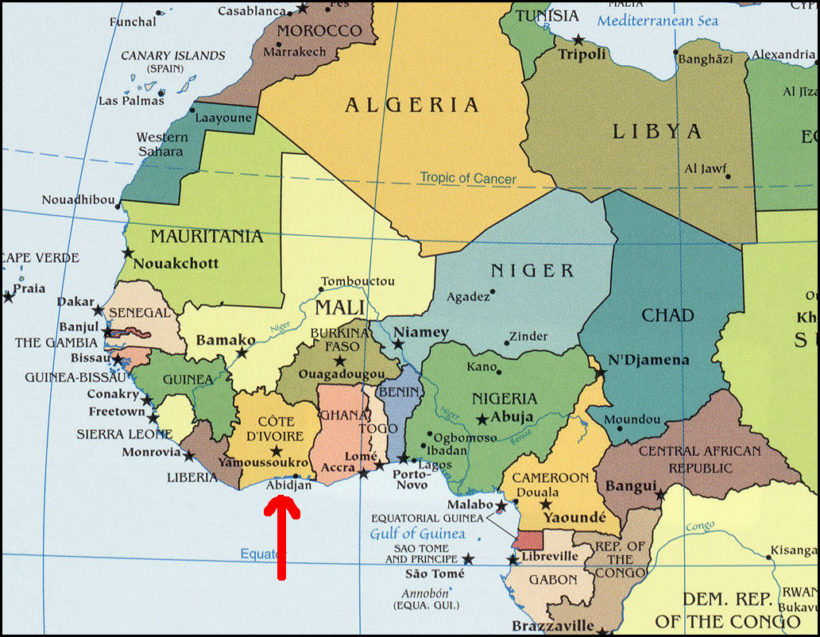 ABIDJAN – Ivory Coast has banned skin whitening creams, which are widely used in west Africa, because of fears they cause lasting damage to health, the health ministry announced on May 6.

“Cosmetic lightening and hygiene creams… that de-pigment the skin… are now forbidden,” the ministry said in a statement.

The ban affects whitening creams and lotions containing mercury and its derivatives, cortisone, vitamin A or more than two percent hydroquinine, a lightening agent that is used to develop photographs.

“The number of people with side effects caused by these medicines is really high,” said Christian Doudouko, a member of Ivory Coast’s pharmaceutical authority, warning that they could cause skin cancer.

Lightening products can also lead to hypertension and diabetes, said Elidje Ekra, a dermatologist at the Treichville university hospital in Abidjan.

Whitening creams have been popular for years among young African women, who see them as a way to make themselves more attractive. Two men walk under a giant advertisement for skin-lightening products in Abidjan on May 2, 2015 (AFP Photo/Sia Kambou)

The use of the creams is believed to be even more widespread in Nigeria.

Although there are no official figures of how many women use such products across Africa, billboards advertising the potentially deadly creams can be seen in cities across the continent.

“In our cultures, some people think women with light skin are the most beautiful. This beauty standard… pushes many girls to depigment their skin,” Ekra said.

“What we see in the media is the lighter one’s skin is, the better one’s life,” he added, referring to advertisements that fill the streets of Abidjan, Ivory Coast’s biggest city, showing models with lighter-than-average skin.

While the craze is most widespread among women, some men use the creams too, Ekra said.

The creams are also extremely popular in many countries in Asia, including India, Pakistan and Japan, as well as in the Middle East.

The French government has taken steps to minimize food waste, banning large supermarkets from destroying unsold products. They will instead be forced to donate the goods to charities or farms.

France’s National Assembly [the lower house of the French Parliament] unanimously voted in favor of the ban on Thursday (May 21) as part of a larger environmental bill. It explicitly prohibits the practice of intentionally spoiling food so it cannot be eaten.

“It’s scandalous to see bleach being poured into supermarket [garbage bins] along with edible foods,”said Socialist MP Guillaume Garot, a former food minister who sponsored the bill, as quoted by AFP. According to official estimates, the average French person throws out 44 to 66 pounds of food a year – 15.4lbs of which is still in its wrapping. (Photo: Christopher Thomond for the Guardian)

Under the new legislation, large supermarkets – those measuring 400 square meters (1,300 square feet) or more – will be forced to give any unsold, but still edible, goods to charities which can serve it to those less fortunate. This includes products that were packaged wrong or damaged, or that are past a recommended use-by date but are not dangerous to eat. Food that is past a firm expiration date would go to farms to be used as animal feed or compost.

The supermarkets must sign formal contracts with charities by July next year, or face penalties of up to €75,000 (US$83,900) or two years in jail.

But Jacques Creyssel, head of the French federation for commerce and distribution, said it is a mistake to only target big supermarkets, which represent only five percent of total food waste.  He said that such large stores are “already the pre-eminent food donors, with more than 4,500 stores having signed agreements with aid groups,” the Guardian reported.

Meanwhile, some charities are actually against the idea of receiving expired food from supermarkets. Patrice Dallem, from the Red Cross, said it would lead to unaffordable “logistical and human costs,” the Local reported.

The new law, which will also introduce an education program about food waste in schools and businesses, is part of an effort by Paris to halve the amount of food waste in the country by 2025.

According to official estimates, the average French person throws out between 44-66lbs of food a year – amounting to a combined national cost of up to €20 billion ($22 billion).

Last month, MPs [politicians] introduced 39 suggestions to the French government to end food waste. Among them were that French people take home ‘doggy bags’ from restaurants.

Voters in Ireland overwhelmingly chose to change their nation’s constitution Friday, becoming the first country in the world to legalize gay marriage through popular vote.

The official results were announced Saturday at a Dublin Castle press conference: 1,201,607 voted in favor of the landmark referendum, while 734,300 voted against it, said Ríona Ní Fhlanghaile, an elections official. Voter turnout in the majority Catholic nation was more than 60%, according to Fhlanghaile.

Despite speculation in the run-up that opposition to the measure might have been understated because people were too shy to tell pollsters that they planned to vote “no” — the outcome was lopsided, with the measure passing by just over 61% of the total vote cast.

Once the votes began to be tallied, the result was never in doubt.   Only one of the country’s 43 parliamentary constituencies failed to pass it.

As is the case in many other countries around the world, the issue is a polarizing one in Ireland, a country that didn’t decriminalize homosexuality until the 1990s.

This referendum was seen as a test of whether more liberal thinking can trump Ireland’s traditionally conservative, Catholic leanings.

Prime Minister Enda Kenny said prior to the vote that the country could “create history” and that a “yes” vote would “obliterate” prejudice along with irrational fears of difference. On Saturday, Kenny said the outcome “disclosed who we are — a generous, compassionate, bold and joyful people.”

“In Ireland, we’re known as a nation of storytellers,” added Deputy Prime Minister Joan Burton. “And today, the people have told quite some story. This is a magical, moving moment.”

Gerry Adams, leader of the Sinn Fein political party, called it “a huge day for equality,” and over the border in Northern Ireland — the only part of the United Kingdom where same-sex marriage is still prohibited — Deputy First Minister Martin McGuinness hoped they’ll take notice.

“The world is moving on and Ireland is taking the lead,” said McGuinness. “Politicians, particularly in the north need to reflect on this progress.”

While same-sex “civil partnerships” were introduced in Ireland in 2010, advocates for gay marriage said those fell short of the recognition and protections afforded by marriage.

Gay and lesbian couples will now be able to enter into civil marriage, which “is different and distinct from religious marriage,” according to Yes Equality, the umbrella group that spearheaded the campaign. “No religious institution can be forced to marry a lesbian or gay couple against their beliefs,” the group’s website says. “Churches will be able to continue with religious ceremonies and will not be required to conduct wedding ceremonies for same-sex couples.” …

(The news briefs above are from wire reports and staff reports posted at Agence France-Presse on May 6,  RT .com on May 22 and CNN on May 23.)

1. For each of the 3 countries, give the following information:
a) capital
b) location/the countries that share its borders
c) the religious breakdown of the population
d) the type of government
e) the chief of state (and head of government if different) If monarch or dictator, since what date has he/she ruled? – include name of heir apparent for monarch.
f) the population
[.
NOTE: Some answers can still be found at the WorldFactBook (a, b and d)  — however, we have determined that it is no longer always accurate for c, e and f.  Instead, the most accurate for these answers is Wikipedia – search there for “Religion in ___” or “Politics of ____” for the leaders.  Just do an internet search for “Population of ___.”]

2. For IVORY COAST:
a) list the who, what, where and when of the news item
b) What types of health problems might people develop from using skin lightening products?
c) Women (and men) with white skin use tanning beds, or sit in the sun for hours building a tan. Dark skinned women (and men) want to look lighter by bleaching their skin. Most of the methods people use to lighten and darken their skin can cause serious health problems. Do you think the government is right to ban these products? Explain your answer.
d) Do you think the U.S. government should ban tanning beds in the U.S.? Explain your answer.

4. For IRELAND:
a) list the who, what, where and when of the news item
b) What percent of voters supported the legalization of gay marriage in Ireland?
c) According to Yes Equality, the umbrella group that spearheaded the campaign to change the law, gay and lesbian couples will now be able to enter into civil marriage, which “is different and distinct from religious marriage.” The group’s website says, “No religious institution can be forced to marry a lesbian or gay couple against their beliefs. Churches will be able to continue with religious ceremonies and will not be required to conduct wedding ceremonies for same-sex couples.” Do you think Yes Equality will continue to hold this view now that same-sex marriage has been made legal in Ireland? Explain your answer.

Also from the CNN article above: