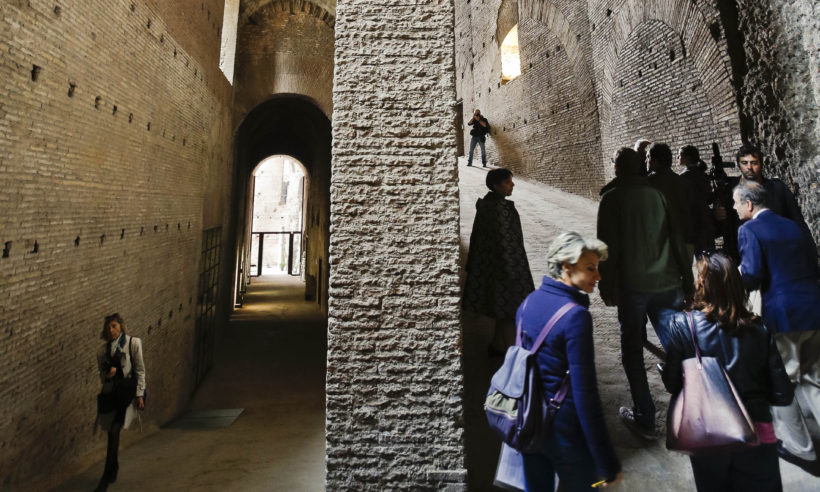 A vast underground passageway that allowed Rome’s emperors to pass unseen from their hilltop palaces to the Roman Forum was opened to the public for the first time on Wednesday, October 21.

The 2,000-year-old “imperial ramp” descended from the top of the Palatine Hill, where successive emperors built lavish palaces [including the Imperial Palace], down to the temples, market places and courts of the Forum in the valley below, from where the Roman Empire was governed.

Lit by flickering torches and protected by imperial guards, the high-ceiling passageway was so vast that emperors could have comfortably passed through it on horseback.

Originally more than 300 yards long, it consisted of seven zigzag ramps, four of which remain today. The rest are believed to have been destroyed in an earthquake in the ninth century AD.

The covered walkway, which is enclosed and would have been invisible to the soldiers, slaves and plebeians going about their business in the Forum, was first discovered in 1900. The tunnel was partially excavated but then was then abandoned for another century, until archaeologists embarked on a major restoration project a few years ago. …

“For centuries, this was the entrance to the imperial palaces on top of the Palatine Hill,” said Francesco Prosperetti, the cultural heritage official in charge of the project.

Once tourists climb to its highest point, emerging from the arched passageway into the daylight, they have a panoramic view of the ruined temples, marble columns and ancient streets of the Roman Forum.

The entrance to the imperial ramp was a huge gateway which has been reconstructed using pieces of the original marble architrave.

The gate led to a reception hall which was converted into a church in the Middle Ages. The walls are still decorated with frescoes of “the 40 martyrs,” Roman soldiers from the XII Legion who converted to Christianity and were then made to stand in a lake, naked, on a bitterly cold night, until they froze to death. Partial view of the restored frescoes adorning the Aula entrance to the Imperial Palace, a complex built by Emperor Domitian on the Palatine hill in the Roman Forum, in the 1st century A.D.

Halfway up the steep passageway archaeologists found the remains of a latrine, built from stone and marble, which would have been used by imperial guards.

Rooms that lead off the ramp – possibly used by detachments of guards – have been converted into a mini-museum of Roman artifacts found close to the passageway.

BONN, Germany – South Africa on Monday (Oct. 19) criticized a draft United Nations accord on fighting climate change as a form of “apartheid” against developing nations.

A U.N. summit in Paris is supposed to agree to a global accord for trying to end climate change in December, but a last week of negotiations on the draft text, which began in Germany on Monday, got off to a stormy start with developing nations saying their demands had been omitted from the shortened 20-page draft.

“It is just like apartheid,” Nozipho Joyce Mxakato-Diseko, South Africa’s delegate who speaks on behalf of the main grouping of more than 130 developing nations and China, told the meeting. “We find ourselves in a position where in essence we are disenfranchised,” she said, saying views of the poor had been ignored.

U.S. delegation leader Trigg Talley said the new text could work as a basis for talks. “This document has many things that most parties cannot agree with,” he said. Rich nations want to ensure that emerging economies will commit to act.

Christiana Figueres, the U.N.’s climate chief, expressed confidence the talks were on track for a deal at the Nov. 30-Dec. 11 summit in France, the goal of which is to cut greenhouse gas emissions they say causes global warming, which they believe causes more frequent and severe floods, droughts, heatwaves and rising sea levels. …

The developing nations won a demand on Monday (Oct. 19) that they could re-insert national demands into the text, raising fears by some that it could again become unwieldy. The previous version ran to 80 pages.

U.N. Secretary General Ban Ki-moon urged negotiators to drop what he says are narrow national interests. “There is no time to waste,” he told a news conference in Slovakia. “It has been quite frustrating to see negotiators negotiating only based on their very narrow national perspectives. This is not a national issue, it’s a global issue.”

Philippe Verdier, the popular chief weatherman at France Télévisions, the country’s state broadcaster, has been reportedly sent on a “forced vacation” for releasing a book accusing top climatologists of “taking the world hostage.”

Mr. Verdier, a household name for his nightly forecasts on France 2, has been taken off air after criticizing the world’s top climate change experts. He asserts in the book Climat Investigation (Climate Investigation) that leading climatologists and political leaders have “taken the world hostage” with misleading data. In a promotional video, Mr. Verdier said: “We are hostage to a planetary scandal over climate change – a war machine whose aim is to keep us in fear.”

Expressing his opinion led France 2 to take him off the air starting Monday, Oct. 19. “I received a letter telling me not to come. I’m in shock,” he told RTL radio. “This is a direct extension of what I say in my book, namely that any contrary views must be eliminated.”

The book was released just before Paris is due to host a crucial UN climate change conference in December.

According to Mr. Verdier, top climate scientists, who often rely on state funding, have been “manipulated and politicized.”

He specifically challenges the work of the UN’s Intergovernmental Panel on Climate Change, or IPCC, saying they “blatantly erased” data that went against their overall conclusions; he also casts doubt on the accuracy of their climate models. (The IPCC has said that temperatures could rise by up to 4.8°C if no action is taken to reduce carbon emissions.)

Mr. Verdier writes: “We are undoubtedly on a plateau in terms of warming and the cyclical variability of the climate doesn’t allow us to envisage if the natural rhythm will tomorrow lead us towards a fall, a stagnation or a rise (in temperature).” …

2. For ITALY:
a) list the who, what, where and when of the news item
b) What was the Forum?
c) From “Background” below the questions: A new crowd-funding initiative, LoveItaly!, was launched to encourage fans around the world to contribute to the upkeep of the country’s artistic treasures amid a decline in public spending for conservation projects. What do you think of the Italian government using this method to raise conservation funding?

3. For SOUTH AFRICA:
a) list the who, what, where and when of the news item
b) Who is Nozipho Joyce Mxakato-Diseko?
c) Why do these countries oppose the UN’s climate change ideas?

4. For FRANCE:
a) list the who, what, where and when of the news item
b) Upon being forced to go on vacation, Mr. Verdier said, ”This is a direct extension of what I say in my book, namely that any contrary views must be eliminated.”
One theory on climate change is the earth’s climate is warming as a result of human actions and an extreme change in the earth’s climate will occur.  Why do you think people who hold this belief wish to silence anyone who disagrees with them? (Ask a few friends and/or relatives why they think this is so.)

SOUTH AFRICA – From a commentary posted at StudentNewsDaily in September 2013 (read the entire article here):

Read more about the IPCC from a previous StudentNewsDaily article.