News from India, Mexico and Italy 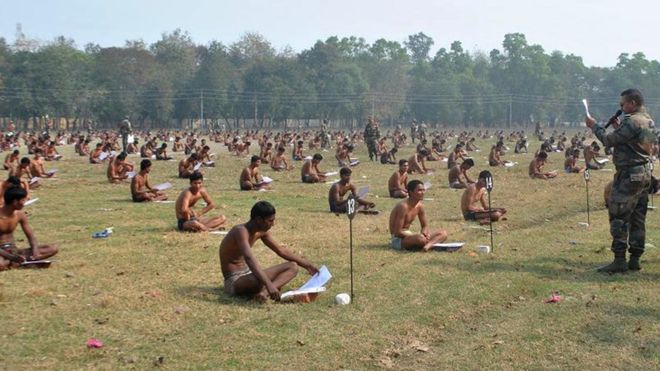 (London’s Daily Telegraph) – India’s army made candidates at a recruitment day in Bihar take a written exam in their underwear to prevent them from cheating after a spate of exam scandals in the eastern state.

Images in the Indian Express showed dozens of men sitting cross-legged in a field clad only in underpants, with many resting their test papers on their thighs, while a uniformed supervisor stood guard.

The paper quoted an army source as saying they took the radical step to “save time on frisking so many people” after more than 1,000 candidates turned up.

“We had no option but to comply with the instructions even though it felt odd,” one would-be recruit told the paper.

An army spokesman in New Delhi refused to comment on the report, which came a year after police in Bihar said they had arrested around 1,000 aspiring officers for paying people to sit their exams for them.

The High Court in the Bihar capital Patna on Tuesday (March 1) asked the defense ministry for an explanation of the unusual move, after a lawyer filed a petition against the army. Map of states of India.

The impoverished state of Bihar, also one of the most populous, is especially notorious.

Last year a scandal in the state that saw relatives scale the walls of a school exam centre to pass notes to candidates went viral and made national headlines.  (see video report below)

In the western state of Gujarat, authorities on Sunday blocked mobile phone Internet services in a string of cities and towns where entrance exams were taking place for public service jobs, to stamp out cheating.

MEXICO – Mexico to fire 3,300 teachers who failed to turn up for exam

(London’s Daily Telegraph) – Mexico’s government will fire more than 3,300 teachers who skipped evaluations under a controversial education reform that has sparked protest in the country’s poorest states, authorities said on Monday (February 29).

Aurelio Nuno, education minister, said 2.2 percent of the 153,000 teachers who had to take the test never showed up and will be fired on Tuesday (March 1).

Some 15 percent flunked the exam, but they will keep their jobs while receiving training to retake the test in the next 12 months, said Mr. Nuno.

“No child will be left without a teacher,” he said.

In all, 51.5 percent of teachers either failed or got a “sufficient” grade that requires further training, while 48.5 per cent got high marks that will allow them to apply for promotions or get raises.

“There is a wide margin for improvements,” added Mr. Nuno.

But the results unveiled by the minister applied for 28 of the country’s 32 federal entities, as rebellious teachers in four states have yet to take a second round of exams.

Teachers in the southern states of Oaxaca, Chiapas and Guerrero and Michoacan in the west have held sometimes violent protests against the reform, which President Enrique Pena Nieto has highlighted as one of the most important of his administration. Map of states of Mexico

Radical unions in those states argue that the reform will destroy their labor rights and fails to take into account the challenge of teaching in poor, remote regions where children speak indigenous languages at home instead of Spanish.

The government says the reform aims to improve the country’s lackluster education system, which is dominated by unions, and end the practice in which teaching jobs are inherited or sold.

(London’s Daily Telegraph and ANSA) – Museum director Mauro Felicori, appointed by the Italian Prime Minister Matteo Renzi to restore the vast Royal Palace of Caserta to its rightful place as the country’s Versailles, has drawn the ire of the unions for working too hard. Mr. Felicori was tasked five months ago with reviving the fortunes of the 1,200-room palace of the Bourbon kings – situated 20 miles north of Naples – which has fallen into decay in recent years amid neglect and mismanagement.

Now, he is at the center of a battle with three Italian labor unions, who have complained that the director often stays working late into the evening without informing other staff. “Such behavior puts the whole structure at risk,” the unions said in a letter to Mr. Felicori’s boss, Culture Minister Dario Franceschini, sent in late February.

The 63-year-old director, admitting he regularly worked 12-hour days, said he doesn’t have to justify himself, calling his job “an enormous responsibility” and said, “the Palace is guarded 24 hours a day, so even if the director asked someone to work overtime… there wouldn’t be anything wrong, but I’ve never done that.”

Mr. Felicori leveled a thinly-veiled criticism at those fighting changes to the system of inefficiency that pervades Italy’s museums. “Let’s not pretend,” he told Italian newspaper Corriere della Sera. “The only thing that is really at risk here is the interests of those wrapped up in the old system in Campania,” (the region where the palace is located).

He said that although he missed his wife, who has remained in his home town of Bologna, his long hours were his duty as a “manager, called here to embark on a great challenge.” In a post on his Facebook page, a frustrated Italian Prime Minister Matteo Renzi said the criticism of Mr. Felicori was ridiculous. “The unions complaining about Felicori, who was chosen by the government after an international selection process, should realize that the tide has turned. The free ride is over!” Mr. Renzi said. He wrote that it was “not by chance” that in February visitors to the Baroque palace were up 70 percent compared to the same month last year. Revenues were up by 105 per cent. “The director is simply doing his job,” he said. “And we all stand by him, without fear.”

Carmine Egizio, Labour union UGL coordinator, said working late was just one of the complaints listed in the letter. “We also cited problems that haven’t ever been solved, like the personnel time clock, which is still the old one,” Egizio said, pointing out that the culture ministry mandated a new system in 2013.

However, the national leader of Italy’s biggest labor group CGIL trade union federation, Susanna Camusso, distanced herself from the complaints against Mr. Felicori. “Mistakes must be acknowledged and those unions are wrong,” she said on Twitter.

(The news briefs above are from wire reports and staff reports posted at London’s Daily Telegraph on March 1, Feb. 29 and  ANSA on March 4.)

2. For INDIA:
a) list the who, what, where and when of the news item
b) For what reasons did army officials take this step?
c) Based on these reasons, do you think this was a good way to prevent cheating? Explain your answer. (Would it have made a difference if a photo of the exam takers was not published in the news?)
d) How does the reporter explain his assertion that cheating is common in India? (Note: What appears to be the case is that it is condoned in some places. Do an internet search to ascertain more facts on this phenomenon.)

3. For MEXICO:
a) list the who, what, where and when of the news item
b) Read the “Background” below the questions. Do you think the Mexican government is justified in firing the teachers? in requiring them to pass certain evaluations to receive raises? in attempting to end the union’s practice of allowing teaching jobs to be inherited or sold? Explain each of your answers.

4. For ITALY:
a) list the who, what, where and when of the news item
b) For what reason have trade unions associated with work at the Royal Palace of Caserta complained about the new museum head Mauro Felicori?
c) How did Mr. Felicori defend himself against the accusations?
d) What was the government’s motive for hiring Mr. Felicori?
e) Do you agree with Mr. Felicori or the unions? Explain your answer.

INDIA – Last year a scandal saw relatives scale the walls of a school exam centre to pass notes to candidates went viral and made national headlines:

ITALY – Visit the UNESCO page for the Royal Palace of Caserta.