News from India, Finland and China 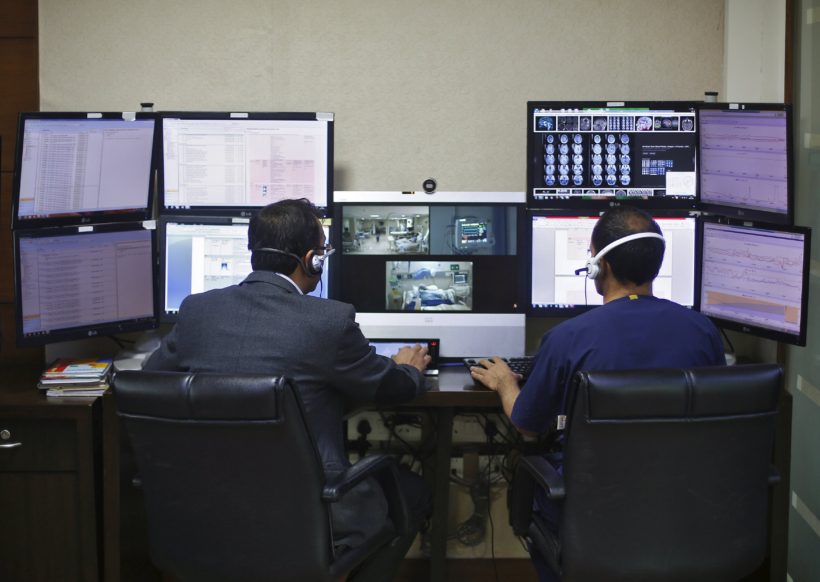 (Reuters) – India’s top private hospitals, seizing on a shortage of critical-care doctors, are expanding into the remote management of intensive care units around the country and, starting this month, in neighboring Bangladesh too.

India has seven doctors for every 10,000 people, half the global average, according to the World Health Organization. Data from the Indian Medical Association shows the country needs more than 50,000 critical care specialists, but has just 8,350.

Such a shortage of doctors means small facilities in India’s $55 billion private hospital market are ill equipped to provide critical care even as numbers seeking private healthcare rise because the public [government-run] health system is in even worse shape.

India’s largest healthcare chain, Apollo Hospitals Enterprise, and Fortis will this year expand their network of electronic intensive care units (eICUs), scaling up operations thanks to advances in communications technology.

Apollo, which monitors 200 patients in six states from its only eICU in Hyderabad city, will open three new centers to track 1,000 more patients. Prasad said he is also in talks to extend the service to government hospitals.

Fortis will start remote monitoring of intensive care patients in the Bangladeshi city of Khulna this week, its first such cross-border operation. The hospital chain tracks 350 patients from its New Delhi centre but will start two more eICUs by mid-2017.

Jayant Singh, director of healthcare at Frost & Sullivan India, a consultancy, estimates that eICUs are boosting industry revenues by $220 million a year by giving smaller hospitals the ability to treat critical patients at the hands of top flight intensive-care specialists, even if they are in another city.

(Reuters) – Thousands of Iraqi refugees who arrived in Finland last year have decided to cancel their asylum applications and to return home voluntarily, citing family issues and disappointment with life in the frigid Nordic country. … Muntadher Tareef, centre, and Hosham Hassen, right, who want to return to Iraq after about five months in Finland, with Somali-born travel agent Muhiadin Hassan in Helsinki last month.

Germany and Finland’s neighbor Sweden have taken in many of the migrants but Finland too saw the number of asylum seekers increase nearly tenfold in 2015 to 32,500 from 3,600 in 2014.

Almost two thirds of the asylum seekers last year were young Iraqi men.  Some are now having second thoughts, so Finland will begin chartering flights to Baghdad this week to take them home.

Officials said about 4,100 asylum seekers had so far canceled their applications and that number was likely to reach 5,000 in the coming months. …

A majority of the home-bound migrants have told immigration services they want to return to their families, but some expressed disappointment with life in Finland.

“Some say the conditions in Finland and the lengthy asylum process did not meet their expectations, or what they had been told by the people they paid for their travel,” said Tobias van Treeck, program officer at the International Organization for Migration (IOM).

Echoing that comment, Somali-born travel agent Muhiadin Hassan who runs a travel agency in Helsinki said: “Some say they don’t like the food here, it’s too cold or they don’t feel welcome in Finland. There are many reasons.” Asylum seekers arrive at a refugee reception centre in the northern town of Tornio, Finland

Nearly 80 percent of the migrants returning home are Iraqis. Just 22 of the 877 Syrians – whose country is racked by civil war – and 35 of the 5,214 Afghans who sought asylum in Finland last year have asked to return to their home country.

Along with other Nordic states, Finland has recently tightened its immigration policies, for example requiring working-age asylum seekers to do some unpaid work.

Hostility to migrants has also increased in Finland, a country with little experience of mass immigration and which now has economic problems.

Germany too, which took in 1.1 million people in 2015, has seen small numbers of Iraqi refugees choosing to go home.

Finland had been preparing to reject up to 20,000 asylum seekers from 2015, but the number of voluntary returnees could significantly reduce that figure. “The number of returnees is increasing steadily … All asylum seekers are informed about the options for voluntary return and about the available financial assistance,” said Paivi Nerg, a senior official in the Finnish interior ministry.

However, most Iraqi returnees pay for their own flight home or seek help from Iraq’s embassy in Helsinki, she added.

Last year the Finnish government and the IOM provided financial help to 631 returnees and a similar number is expected this year.

The charter flights will carry up to 100 passengers back to Baghdad from Helsinki every week for as long as demand lasts, officials said. (from a Feb. 12 Reuters report)

CHINA – Communist government has kidnapped several critics of the government

(USA Today) – China’s government is sending a message to citizens who dare to dissent: flee China if you dare, but know that, even in foreign lands, your criticism of the Communist Party may be punished if Chinese agents find you and spirit you back to the mainland. Recent months have seen an unprecedented expansion of China’s power to snatch up detractors across borders. Under mysterious circumstances, critics of China’s ruling party have been yanked from various foreign countries as well as the quasi-autonomous* city-state of Hong Kong. [quasi – apparently but not really; seemingly:  autonomous – self-governing; independent; subject to its own laws only]

These operations are increasingly brash. In Myanmar, Chinese authorities captured the teenage son of two detained human rights lawyers with the cooperation of mountain-dwelling rebels. In Thailand, four critics recently [forcibly brought] back to China include two men with United Nations refugee status.

Others snatched from Thailand: a journalist, detained in January while preparing to seek asylum, and a publisher with dual Chinese-Swedish citizenship. The latter, Gui Minhai, later appeared on Chinese state TV weeping and claiming unconvincingly that “returning to the Chinese mainland and surrendering was my personal choice.”

Foreign citizenship also failed to protect bookseller Lee Bo, a Hong Kong resident with a British passport. After his Dec. 30 abduction in Hong Kong, he claimed in an equally improbable letter, written from an undisclosed detention center, that he simply volunteered to go to prison in mainland China.

Few are convinced that critics of China’s authoritarian regime would suddenly decide to rush into its arms. All are now at “the mercy of a criminal justice system where torture and other ill-treatment to extract ‘confessions’ remains widespread,” according to Amnesty International. Their offenses include publishing exposés and reports on scandals that embarrass the Communist Party. Some of them amount to substantial accounts of abuse. Others are closer to National Inquirer-style tabloid fodder. At the time they disappeared, Lee and Gui, both Hong Kongers*, were prepping a salacious book on the Chinese president’s love life. (USA Today, Feb. 9)

[*In 1997, Hong Kong, a former British colony, was returned to Communist Chinese rule under a “one country, two systems” form of government. It was given wide-ranging autonomy, including an undated promise of “universal suffrage.” However, in 2014, Beijing (the Chinese Communist government) made it clear it would not allow fully-democratic elections for the city’s next chief executive in 2017.]

(The news briefs above are from wire reports and staff reports posted at Reuters on Feb. 8, Feb. 12 and USA Today on Feb. 9.)

2. For INDIA:
a) list the who, what, where and when of the news item
b) For what reason are private hospitals taking this step?
c) How many doctors does India have per 10,000 people?
CHALLENGE: How does this compare with the U.S.? With China? With the UK? (How many doctors per 10,000 people do these other countries have?)
d) How many critical care specialists does India have? How many are needed?
e) Think about this: Wikipedia reports:
There are currently (as of 2005) 40,838 doctors of Indian origin in the U.S. and they account for 5% of all doctors in the USA and 20% of all International Medical Graduates employed in the US workforce. It is noteworthy that India provides the largest number of International Medical Graduates to the US in absolute numbers. With 59,523 physicians of Indian origin working in the English speaking Western world (the US, UK, Australia and Canada combined), India is by far the single largest source of emigre physicians in the world.
Why do you think so many Indian doctors choose to leave India? What incentives should the Indian government offer to doctors to stay in India?

3. For FINLAND:
a) list the who, what, where and when of the news item
b) Why are thousands of Iraqi refugees voluntarily leaving Finland to return home? Be specific.
c) Read the definitions for asylum and refugees under “Background” below. What does this tell you about the Iraqi (or other) asylum seekers’ decision to return home?

4. For CHINA:
a) list the who, what, where and when of the news item
b) Hong Kong publishers Gui Minhai and Lee Bo were preparing a book on Chinese President Xi JinPing’s love life. What citizenship/passport does each man hold?
c) After disappearing, what did Gui do? What did Lee Bo write in a letter?

A doctor at a hospital in India’s capital, New Delhi, was recently tracking a wall of monitors displaying the vital signs of intensive care patients admitted hundreds of miles away when red-and-yellow alerts rang out.

The oxygen flow to a 67-year-old patient had stopped when no critical care doctors were present in a hospital in the northern city of Amritsar. But the doctor in the New Delhi centre run by Fortis Healthcare quickly issued a set of instructions and stopped the patient from suffering brain damage or death, the Indian hospital chain said in an account of the episode.

With multiple computer screens inside these high-tech eICUs, doctors suggest treatment procedures after assessing medical history and real-time heart rate charts of patients fighting for their lives in distant facilities.

Doctors recently saved a 30-year-old pregnant woman in a hospital in the southern city of Warangal after her heart stopped beating, assisting a resident doctor not specialized in intensive care to carry out chest compressions through a video link.

“We save about 25 lives a month,” said Shamit Gupta, medical director at Fortis’ eICU unit.

Hospitals charge between $10 and $30 a day to virtually monitor a patient from their eICUs, with revenues shared between hospitals and companies such as General Electric and Philips that have developed the tracking software.

That comes on top of standard critical care costs of about $200 a day in a small city hospital.

At that price, eICUs do little to address concerns of millions of India’s poor patients who often share beds or wait for days to gain admission to a public hospital.

“This technology basically is not bridging the gap between the poor and the rich, but increasing access to specialized healthcare for those who can afford it,” Frost & Sullivan’s Singh said. (from the Reuters article above)

Who are asylum seekers?
Asylum seekers are people displaced by persecution and conflict around the world. They flee their homes in search of asylum and refuge, away from persecution. They are seeking international protection but whose claim for refugee status has not yet been determined. Their refugee status application is processed by the UN High Commissioner for Refugees (UNHCR) or a government that is a signatory to the UN 1951 Refugee Convention. An asylum seeker must be outside of their country of origin in order to lodge an application for protection.

“owing to well-founded fear of being persecuted for reasons of race, religion, nationality, membership of a particular social group or political opinion, is outside the country of his nationality and is unable or, owing to such fear, is unwilling to avail himself of the protection of that country.”

People who arrive in countries that are signatory to the 1951 UN Convention, regardless of their method of arrival, are entitled to seek refugee protection. (from the Salvation Army website)