News from Honduras, Belarus and Syria 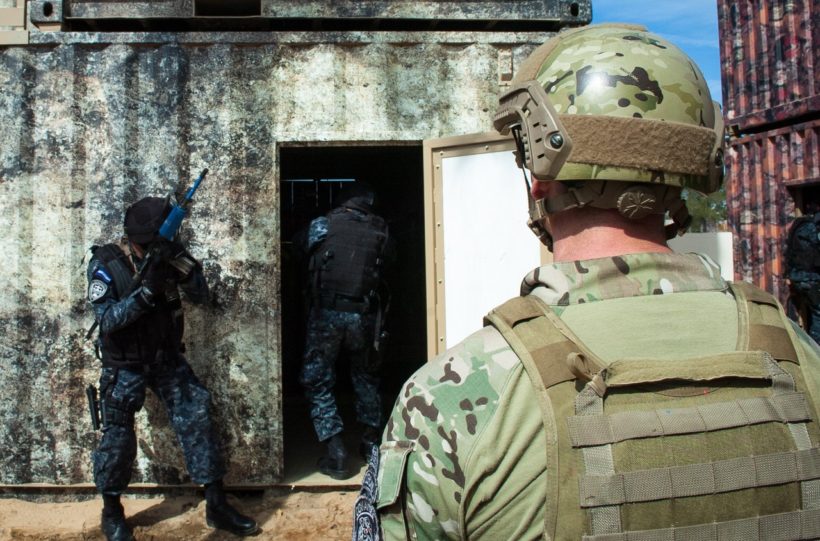 A Green Beret from the 7th Special Forces Group (Airborne) observes Honduran TIGRES as they react to being engaged from a building inside compound located on an Eglin Air Force Base range Feb. 27.

In an apartment a few miles away, two U.S. Special Forces soldiers monitored the operation. They marked assault routes on a satellite view of the slum and scanned photos from a circling police helicopter. They read WhatsApp text messages between the SWAT commander and his men. The Tigres practice with live ammunition under the supervision of U.S. Special Forces at a training camp in Honduras

The Hondurans kicked in the doors, but the raid was the product of a U.S. campaign to use American commandos to fight Central American street crime and drug trafficking—and to stem the illegal immigration generated by the violence. Over the past two years, U.S. Special Forces have built the elite SWAT unit, called the Tigres, from scratch.

“More than anything, we’re looking to promote stability and security downrange because if they’re stable and secure, that’s going to naturally protect our southern border,” said Col. John Poast, who was until recently deputy commander of U.S. Special Operations Command-South. The Honduran mission is part of a broader global security campaign by U.S. special-operations troops deployed in more than 80 countries, from Chad to Ukraine, Bangladesh to Peru. The commandos usually train foreign armies in a strategy to maintain U.S. military dominance using a limited footprint.

In Honduras, elite U.S. troops are tackling civilian law-enforcement, driven by the hope that beefing up police operations will stabilize a small country closer to home.

Two years ago, U.S. officials worried that Honduras was becoming a failed state ruled by traffickers and thugs. In 2012, Honduras had the highest homicide rate in the world, 91 killings for every 100,000 residents, according to the most-recent United Nations data. The comparable homicide rate in the U.S. was fewer than five.

Many Honduran parents, worried about dangers at home, send their children north to the U.S. In 2014 and 2015, more than 23,000 unaccompanied Honduran children were tallied crossing the Mexico-U.S. border, according to U.S. government figures.

After taking office in 2014, Honduran President Juan Orlando Hernandez made good on a law-and-order campaign promise and put thousands of soldiers on the streets. The move proved popular and the Hernandez administration promised to keep the military on the streets until 2018.

The sight of camouflage at intersections and key buildings, however, raised memories in Washington of Latin America’s history of repressive military regimes, one reason why the U.S. is supporting an overhaul of the civilian police force, long considered both inept and corrupt.

The Hondurans asked the U.S. to help finance and train the Tigres, a SWAT force capable of carrying out high-risk arrests in the…slums of Tegucigalpa and other violent neighborhoods. The Tigres have scored some notable wins, including [multiple] raids at the end of last year. They killed two suspected…gang members in a shootout in Tegucigalpa, captured three murder suspects and, in October, detained 38 people in a criminal network allegedly led by a small-town mayor.

A peaceful presidential election in October, the release of political prisoners and Lukashenko’s role in holding Ukraine-Russia peace talks in Minsk have improved ties with the man who the United States once said runs Europe’s last dictatorship. “This decision is not taken under the illusion that Belarus is changing overnight,” Germany’s Foreign Minister Frank-Walter Steinmeier said, underlining what the European Union insists is its sober but constructive approach to the former soviet state.

Announcing its decision at a foreign ministers’ meeting in Brussels, the European Union said it will maintain its arms embargo on Belarus and will keep sanctions for another year on four members of Lukashenko’s security service suspected of being behind the disappearances of two opposition politicians, a businessman, and a journalist.

The sanctions — on 170 people, including Lukashenko, and three companies — were already lifted for four months at the end of October in a gesture to Lukashenko. Monday’s decision means they will end definitively [absolutely] on March 1.

The European Union has pushed for democratic change in Belarus but is now shifting its approach to engage rather than isolate its neighbors in central and eastern Europe, as well as to counter what it sees as a newly aggressive Russia, which annexed Ukraine’s Crimea peninsula in 2014.

They had warned Lukashenko, in power for two decades, that sanctions relief depended on a peaceful election on Oct. 11 last year, which returned the president for a fifth term but which did not feature the kind of crackdowns [on citizens] that have followed Belarus’ elections in 2010 and brought on the EU’s sanctions.

The release of political prisoners in August was also sought by the European Union. Brussels is still urging Minsk to abolish the death penalty.

The conciliatory moves by Lukashenko suggest he is seeking to improve his image abroad to rely less on his ally Russia, which is under Western sanctions due to the Ukraine conflict and also suffering from the fall in oil prices.

In its statement, the European Union offered to help Belarus economically and with trade preferences, also aiding its bid to join the World Trade Organization. Belarussian companies will be eligible for financing from the European Investment Bank and the European Bank for Reconstruction and Development.

(CBS News) BEIRUT — The Islamic State of Iraq and Syria (ISIS) has been paid millions of dollars in ransom for a group of Assyrian Christians it kidnapped in Syria a year ago, Christian officials…said on Monday, Feb. 22, as the last of the 230 hostages were freed.

The release ended a yearlong saga for the Christians — many of them women and children — during which families had no news from their loved ones. The 16 freed hostages, comprising men, women and children, was met by His Grace Mar Afram Athneil, Bishop of Syria

Mr. Younan Talia, of the Assyrian Democratic Organization, told The Associated Press that about 40 remaining captives were released early Monday and arrived in the northeastern town of Tal Tamr. He said the release came after mediation led by a top Assyrian priest in northern Syria.

The extremists captured the Assyrians, members of an ancient Christian sect, last February after overrunning several communities on the southern bank of the Khabur River in northeastern Hassakeh province. Two young Assyrians sit next to the fence with a Cross. They fled with their families from Islamic State’s held Mosul to Koysinjaq, Iraqi Kurdistan.

Kidnapping for ransom is a main source of income for the extremists…. Talia said ISIS demanded a ransom of $18 million for the Assyrian Christians. He said the figure was later lowered following negotiations. He said he did not know the final amount.

A Syrian Christian figure said the worldwide Assyrian community launched a campaign for the captives’ release shortly after they were abducted. He said a bank account was opened in the northern Iraqi city of Irbil and donations were sent from around the world. …

The director of the Syrian Observatory for Human Rights, Rami Abdurrahman, said $25-30 million in ransom money was paid by businessmen and the Assyrian church, who asked that the terms of the deal remain secret to avoid allegations of supporting terrorism. Abdurrahman, whose group documents the war through activists on the ground, did not say how he got the information.

The money would be a shot in the arm for ISIS, which has been faced with a cash shortage in its so-called caliphate across parts of Syria and Iraq. The Associated Press reported earlier this month that the group is having a hard time meeting expenses, thanks to coalition airstrikes and other measures.

An Assyrian woman in Beirut, Lebanon, whose parents, brother and sister-in-law were among those abducted and released over the past year, told AP that the detention left her parents “psychologically scarred.”

ISIS attacked a cluster of villages along the Khabur River last year, sending thousands of people fleeing to safer areas and capturing the Assyrians over a period of three days. Over the next two days, the extremists picked up dozens more from 11 communities near Tal Tamr, Syria.

The Hassakeh province of Syria, which borders Turkey and Iraq, has become the latest battleground in the fight against ISIS in Syria. It is predominantly Kurdish but also has Arabs, Assyrians and Armenians.

On Friday, the predominantly Kurdish Syria Democratic Forces captured the ISIS stronghold of Shaddadeh in Hassakeh, where some of those kidnapped were once believed to have been held.

Many Syrian Christians, who make up about 10 percent of Syria’s pre-war population of 23 million, left for Europe over the past 20 years, with the flight gathering speed since the country’s conflict began in March 2011. (The news briefs above are from wire reports and staff reports posted at The Wall Street Journal on Feb. 22, Reuters on Feb. 15 and CBS News on Feb. 22.)

2. For HONDURAS:
a) list the who, what, where and when of the news item (ANSWER FOR HONDURAS FOUND IN 3RD PARAGRAPH)
b) What is the goal for having U.S. special ops forces train the Tigres? Be specific.
c) How did the homicide rate in Honduras compare to the U.S. in 2012? How has it changed since then?
d) What do you think of the special training we are giving Honduran police?
e) The Wall Street Journal reports: “The Honduran mission is part of a broader global security campaign by U.S. special-operations troops deployed in more than 80 countries, from Chad to Ukraine, Bangladesh to Peru. The commandos usually train foreign armies in a strategy to maintain U.S. military dominance using a limited footprint.” What is your reaction to this? (surprise, approval, dismay…) Explain your answer.

3. For BELARUS:
a) list the who, what, where and when of the news item
b) For what reasons do European Union officials say they are lifting the 5 year old sanctions against Belarus?
c) What is most likely the real reason?
d) What is believed to be President Lukashenko’s motive for attempting to appear to work with the EU?
e) Ask a parent or grandparent: do you think the EU’s decision to drop sanctions against Belarus was the best decision? Explain your answer.

4. For SYRIA:
a) list the who, what, where and when of the news item
b) How many Assyrians were kidnapped? For how long were they held?
c) Why does the Assyrian church want to keep the terms of the ransom secret?
d) ISIS terrorists kill Muslims and Christians. However, no Christian is safe in these areas. Many call on the U.S. government to give special preference to Arabic and Assyrian Christians seeking asylum here. Do you agree? Explain your answer.

Read more about the Assyrians at Nineveh.com.

From a Feb. 22 Daily Caller report: