News from Germany, Libya and Turkey 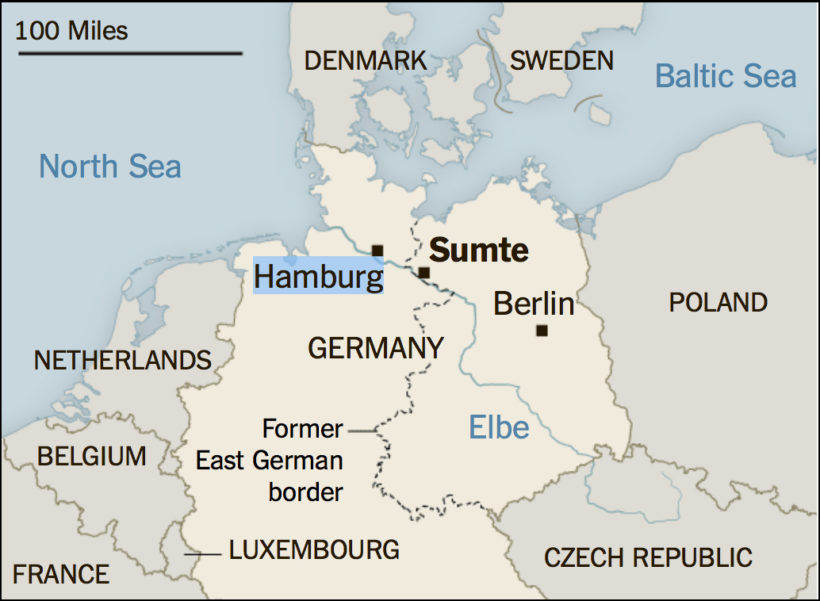 SUMTE, Germany — In early October, the district government for the German village of Sumte informed Sumte’s mayor, Christian Fabel, by email that his village of 102 people just over the border in what was once Communist East Germany would take in 1,000 asylum seekers.

His wife, the mayor said, assured him it must be a hoax. “It certainly can’t be true” that such a small, isolated place would be asked to accommodate nearly 10 times as many migrants as it had residents, she told him. “She thought it was a joke,” he said.

But it was not. …the German government is scrambling to find shelter for what, by the end of the year, could be well over a million people seeking refuge from poverty (economic migrants) or wars (refugees) in Africa, Syria, Iraq, Afghanistan and elsewhere.

In a small concession to the villagers, Alexander Götz, a regional official from Lower Saxony, told them this week that the initial number of refugees, who started arriving on Monday (Nov. 1) and will be housed in empty office buildings, would be kept to 500, and limited to 750 in all. German Chancellor and Chairwoman of the German Christian Democrats (CDU) Angelika Merkel speaks to CDU members while attending a regional “Future Conference” on November 2, 2015 in Darmstadt, Germany. Merkel is facing increasing criticism from members of her own party over her open migrants policy. Germany is expected to register over one million asylum applicants this year.  Local communities across Germany are struggling to accommodate all the newcomers.  (Photo by Thomas Lohnes/Getty Images)

Nevertheless, the influx is testing the limits of tolerance and hospitality in Sumte, and across Germany. It is also straining German politics broadly, creating deep divisions in Chancellor Angela Merkel’s party …

…There are widespread concerns, even in the political mainstream, over absorbing vast numbers of refugees, as the influx tests Germany’s capacity to cope.

Sumte has no shops, no police station, no school. The initial number of arrivals was, in fact, reduced to avoid straining the local sewage system and give time for new pumps to be installed.

“We have zero infrastructure here for so many people,” Mr. Fabel, the mayor, said. As the federal government desperately scrambles to find shelter for the refugees before winter sets in, it is assigning quotas to each of Germany’s 16 Länder, or states, based on factors like economic strength and population.

Initially, the migrants were housed across the country in renovated homes, then in gymnasiums, military bases and old schools, but as obvious shelters run out, the authorities are hunting for any free space they can find, like the 23 empty office buildings in Sumte.

Dirk Hammer, a Sumte resident, said that he felt sympathy for the refugees, but that he feared the sheer number of people dumped with little warning in places like this could offer “an ideal platform for the [neo-Nazis]. I get stomachaches from fear of what is going to happen — not just here but in the whole of Germany,” he said.

An assertion by a senior regional police official that Sumte did not need a permanent police presence prompted one villager to jump to his feet at a meeting and shout, “Of course we need protection.” But the discussion was civil and devoid of inflammatory outbursts.

Mr. Fabel, the mayor, insisted that Sumte, despite its unease, was open-minded and hospitable, and was now focused on making the refugee holding camp work.

He said he realized that there was no point in trying to block the plan when, at the initial meeting, he asked Mr. Götz, the regional official in charge of finding places for migrants, whether Sumte had any choice. “You have two options,” he said he was told. “Yes, or yes.” Mr. Götz declined to be interviewed.

The asylum seekers will stay in Sumte only as long as it takes to process their applications for refugee status. But those who move on will eventually be replaced by new arrivals, as the vast stream of refugees and migrants shows no signs of slowing.

“Life here is going to change,” the mayor said.

TRIPOLI – Libya has issued a veiled threat to send “hundreds of thousands” of extra migrants to Europe if Brussels [the European Union] does not give official recognition to its self-proclaimed Islamist government.

Officials say they could hire boats to send large numbers of African migrants across the Mediterranean, massively adding to the numbers already reaching Europe’s borders.

The warning was made by a spokesman for Libya’s General National Congress (GNC) in an interview with The Telegraph in the Libyan capital, Tripoli.

The General National Congress (GNC) took control of Tripoli last year after fighting against forces loyal to the internationally- recognised House of Representatives (HoR) government, and is not recognised by the European Union as Libya’s legitimate government. A fortnight ago, both factions also rejected the terms of a United Nations-brokered peace deal. Jamal Zubia, the GNC’s foreign media spokesman, told The Telegraph that Libya was currently spending tens of millions of pounds a year stopping migrants from crossing the Mediterranean, through the use of detention centres and repatriation programs.

He said that if Europe continued to refuse to recognise the Congress’s authority, the Libyan government could reverse the policy.

“To be honest, I have advised my goverment many times already that we should hire boats and send them to Europe,” he said. “We are protecting the gates of Europe, yet Europe does not recognize us and does not want to recognise us. So why should we stop the migrants here?”

Libya has long been a major transit country for migrants from sub-Saharan Africa, but the numbers have grown much greater thanks to the security vacuum that followed Colonel Moamar Gaddafi’s fall in 2011.

Last year alone, an estimated 170,000 migrants arrived by boat from Libya in Italy. Between January and September this year the figure was 130,000, although that reflects greater use of the so-called “Aegean” route via Turkey and Greece, where 360,000 people have so far crossed in 2015.

On Monday, the UN said that in total, more than 218,000 migrants and refugees crossed the Mediterranean to Europe in October – the highest monthly figure on record, and more than during the whole of 2014.

Contrary to popular impression, the Libyan government does not turn a complete blind eye to people-smuggling.

Its Department for Combating Illegal Immigration employs around 8,000 staff and detains large numbers of migrants for entering the country illegally, as well as working with the International Organization for Migration on voluntary repatriation programmes.

Mr. Zubia stressed that his government had no immediate plans to stop its efforts to half the flow of migrants, or to start hiring ships to speed their passage to Europe.

But his comments will be seen as a reminder to Europe that the GNC in Tripoli has ways it can retaliate for the EU’s refusal to recognise it as a government.

International observers of Turkey’s parliamentary elections have criticised the climate of violence and fear that preceded the vote, saying the security environment, arrests of opposition activists and stifling of press freedoms combined to make the campaign unfair. The Turkish president, Recep Tayyip Erdoğan, has said he deserved respect from the whole world following Sunday’s result. But the international election observation mission that monitored the polls expressed serious concerns at a press conference in Ankara on Monday.

“This campaign was unfair and characterised by too much violence and fear,” said Andreas Gross, the Swiss head of the mission representing the parliamentary assembly of the Council of Europe (Pace).

The Justice and Development party (AKP) which Erdoğan founded and which is led by the prime minister, Ahmet Davutoğlu, regained the outright majority it had lost in June’s inconclusive election, securing 317 seats. Saying the Turkish electorate had voted for stability, Erdoğan on Monday urged the international community to accept the election results.

“The final decisive actor in our political world is the national will, and yesterday on 1 November, the national will favoured stability,” Erdoğan said before castigating the international media for criticising his rule.

“Why is the world media taking such a close interest in Turkey while ignoring their own countries? Why don’t they respect the national will? The national will elected me by 52%. They still have not respected that fact,” he said. “Now a party with some 50% in Turkey has attained power … This should be respected by the whole world, but I have not seen such maturity.”

Gross appealed to the Turkish president to reduce polarisation in the aftermath of the divisive election. “He has to unite again what has been divided in the last five months,” he said.

The observer mission’s preliminary report said that while the elections were conducted professionally and offered a variety of choices for the electorate, the violence against the opposition and their party premises hindered their ability to campaign freely, citing the arrest of activists of the opposition pro-Kurdish HDP in the run-up to the vote.

It also said press freedom remained an area of serious concern, with ongoing criminal prosecutions of journalists and closures of media channels limiting the opposition’s ability to present its views to the public.

“Criminal investigations of journalists and media outlets for support of terrorism and defamation of the president, the blocking of websites … and the effective seizure of some prominent media outlets reduced voters’ access to a plurality of views and information,” the mission said in its statement. …

(The news briefs above are from wire reports and staff reports posted at The NY Times on Oct. 31, London’s Daily Telegraph on Nov. 2 and London’s Guardian on Nov. 2.)

2. For GERMANY:
a) list the who, what, where and when of the news item
b) Why was the number of refugees to arrive on the first day to Sumte reduced?
c) Sumte has no police department and the regional government has no plans to give them one. Do you think this is the best policy for the village with the refugee situation? Explain your answer.
d) What is the population of your town/city?
e) Multiply your town’s population by eight. What effect do you think that extra number of people being put into dorm-type temporary housing, who need jobs, schooling, medical care, language lessons, mosques and Halal food would have on your community?
f) Do you think German Chancellor Angela Merkel is taking the best action for the refugees? for her country? Explain your answer.
g) Would alternatives such as asking countries that share the same language, religion and customs as the refugees to take them, and have European countries provide financial assistance to those governments be a better solution or a bad idea? Explain your answer.

3. For LIBYA:
a) list the who, what, where and when of the news item
b) Why doesn’t the international community (including the U.S. and the EU) recognize Libya’s General National Congress government?
c) How should the European Union respond to these threats from Libya?