News from Germany, Brazil and Venezuela 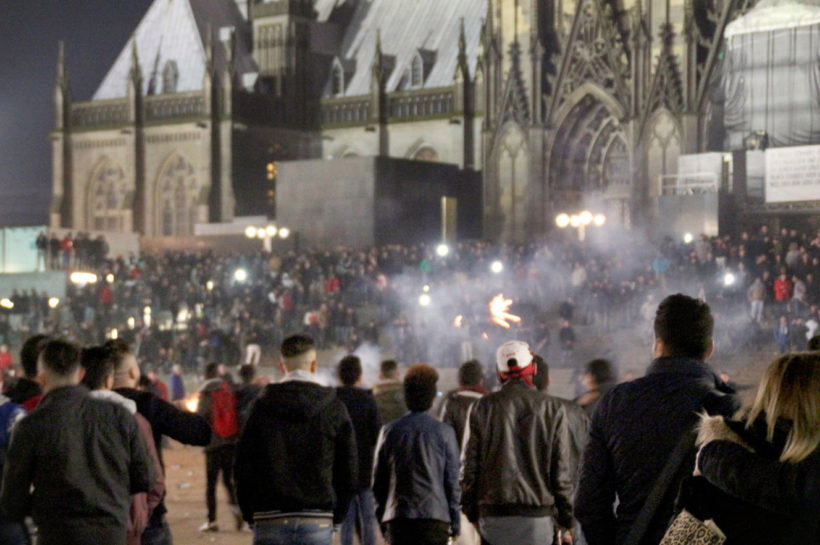 Attacks on women in Cologne and other German cities on New Year’s Eve have prompted more than 600 criminal complaints, with police suspicion resting on asylum seekers, putting pressure on Chancellor Angela Merkel and her open door migrant policy.

The attacks, mostly targeting women and ranging from theft to sexual molestation, have prompted a highly-charged debate in Germany about its welcoming stance for refugees and migrants, more than one million of whom arrived last year.

The sudden nature of the violent attacks and the fact that they stretched from Hamburg to Frankfurt prompted Germany’s justice minister Heiko Maas to speculate in a newspaper that they had been planned or coordinated. Map of migrant attacks on women on New Year’s Eve.

The debate on migration will be further fueled by the acknowledgement by the authorities in North Rhine-Westphalia that a man shot dead as he tried to enter a Paris police station last week was an asylum seeker with seven identities who lived in Germany.

In Cologne, police said on Sunday that 516 criminal complaints had been filed by individuals or groups in relation to assaults on New Year’s Eve, while police in Hamburg said 133 similar charges had been lodged with the north German city. Frankfurt also registered multiple complaints as well.

The investigation in Cologne is focused largely on asylum seekers or illegal migrants from north Africa, police said. They arrested one 19-year-old Moroccan man on Saturday evening.

In Cologne, where a 100-strong force of officers continued their investigations, around 40 percent of the complaints included sexual offenses, including two rapes.

The attacks, which prompted protests by German citizens on Saturday, threatens to further erode confidence in Merkel, and could stoke support for the anti-immigrant Alternative for Germany (AfD) party ahead of three key state elections in March.

Merkel’s popularity has dwindled as she refused to place a limit on the influx of refugees from Syria and other Muslim countries.

The Cologne attacks also heated up the debate on immigration in neighboring Austria.

“What happened in Cologne is unbelievable and unacceptable,” Austrian Interior Minister Johanna Mikl-Leitner. There had been a handful of similar incidents in the border city of Salzburg, Austria. “Such offenders should be deported,” she said, backing a similar suggestion by Merkel.

Swiss media contained numerous stories about sexual assaults on women by foreigners, fuelling tensions ahead of a referendum next month that would trigger the automatic deportation of foreigners convicted of some crimes.

Television images showed small groups of rock-throwing, masked youths clashing with police in the center of the metropolis, amid burning piles of rubbish. Protesters smashed the windows of buses and vandalized bank agencies. Riot police protect themselves behind shields as object are thrown at them by demonstrators during a protest against fare hikes for city buses in Sao Paulo, Brazil, January 8, 2016. REUTERS/Nacho Doce

Many Sao Paulo residents have been angered by the increase in public transport prices, with inflation in Brazil already running at more than 10 percent.

More than 1.5 million Brazilians lost their jobs in the year to November, as Latin America’s largest economy edged deeper into its worst recession in more than 25 years.

The march gathered thousands in Sao Paulo’s downtown area and quickly turned violent when masked youths threw rocks at police. There was no immediate information about arrests or injuries.

The scenes evoked protests that swept Brazil in 2013, sparked by anger over bus fare increases, that brought hundreds of thousands of people onto the streets. The demonstrations come as left-leaning President Dilma Rousseff, whose popularity has been crushed by the recession and a sweeping anti-corruption investigation that has ensnared her ruling coalition, faces impeachment proceedings in Congress.

Some political analysts say the mood on the streets toward her government could play an important role in determining the outcome of the impeachment process.

The new majority in Venezuela’s parliament wasted no time showing who’s now in control, using its first week in power to remove all images of the late Hugo Chávez from the National Assembly building.

Henry Ramos Allup, leader of the opposition that won control of parliament in last month’s historic election, on Wednesday ordered all portraits of the longtime socialist leader to be taken down. He also ordered removing all images of Simón Bolívar, who helped liberate South America from Spanish rule and the namesake of Chávez’s “Bolivarian Revolution.” National Assembly employees removed pictures of the late President Hugo Chavez from the legislative building in Caracas on Wednesday. Venezuela’s opposition has broken the government’s long grip on the legislature.

Images of the two men were erected throughout Venezuela during more than a decade of Chávez’s rule, their portraits looking down on people from government buildings, billboards and signs. On Wednesday, a day after the new parliament was sworn into office, videos show Ramos instructing workers to take down all those pictures that hang in the capital complex.

“Take the images to his daughters and widows,” Ramos said, according to the Havana Times. “This place is no cemetery.”

The week has already been filled with protests around the assembly building, where Chávez’s party had ruled for 15 years. Ramos also spoke frankly about his quest to remove President Nicolás Maduro — Chávez’s handpicked successor — in a process that he claims will be “constitutional, peaceful and electoral.” Ramos’ decision to remove images of the former leaders became the latest insult in a difficult transition to the new political reality in Venezuela.

“We denounce the climate of disrespect and intolerance that they are trying to create in the National Assembly,” said lawmaker Victor Clark of the socialist party that ruled under Chávez, according to TV station teleSUR. “Even if the parliament believes those paintings should not be in place, [I think] the Venezuelan people think that they should.”

(The news briefs above are from wire reports and staff reports posted at Reuters on Jan. 10, Jan. 8 and USA Today on Jan. 7.)

Find the answers at the CIA World FactBook website. For each country, answers can be found under the “Geography” “People” and “Government” headings.
Or, go to Wikipedia – search there for “Religion in ___” or “Politics of ____” for the leaders.  Or do an internet search for “Population of ___.”

2. For GERMANY:
a) list the who, what, where and when of the news item
b) In response to the widespread assaults on women in her city by Muslim men, the mayor of Cologne said women should avoid standing too close to strangers (she suggested standing at least an arm’s length apart) or traveling alone to avoid being assaulted. How should the Mayor of Cologne (and the leader of Germany Angela Merkel) responded to the attacks by Arab and North African men attacking women in the city center on New Year’s Eve? (and hundreds of others doing the same in several other German cities?)
c) Read the “Background” below the questions.
Does the fact that it is most likely a small percentage of the almost 1 million migrants and refugees from Muslim countries affect your view of when and how many refugees should be welcomed to the U.S.? Explain your answer.

3. For BRAZIL:
a) list the who, what, where and when of the news item
b) Why were Brazilians protesting?
c) Who is blamed for the violence during the protests?
d) How do you think law enforcement from any country should deal with this type of violent protestor?
e) How does violence affect the legitimacy of their protests?

4. For VENEZUELA:
a) list the who, what, where and when of the news item
b) The opposition party (opposed to socialist President Nicholas Maduro) won the majority in the National Assembly in the December election with 74% voter turnout.
Watch the video under “Resources.” Why did they remove multiple photos of longtime leader Hugo Chavez from the National Assembly building?

Did you know? The 2016 Summer Olympic Games will be held in Rio de Janiero, Brazil from August 5-21. Visit the official website: rio2016.com

President Nicholas Maduro is the hand-picked successor of socialist autocratic President Hugo Chavez.  He continues Chavez’s policies. Having risen from a Caracas bus driver to Chavez’s vice president, Mr. Maduro won an April 2013 election to succeed him after his death from cancer. Opponents mock him as a poor imitation of Chavez, Venezuela’s leader of 14 years, arguing that he is ruining the country by continuing the same model of authoritarian leadership and failed leftist economic policies. (from London’s Daily Telegraph October 2013)

A gifted, charismatic orator with a keen ability to connect with the poor masses, Hugo Chavez was able to marshal public backing for a series of referendums that created a new constitution and permitted him to bring every important institution – from the legislature to the state oil company – under his control.

Chavez also advanced on what he called 21st-century socialism, which included the nationalization of hundreds of companies, the seizure of large land holdings, price controls and currency regulations. In speeches blaming capitalism for society’s ills, Mr. Chavez said his policies had made Venezuela a more prosperous country, independent of U.S. meddling and influence.

But throughout his presidency, Venezuela’s economy was plagued by blackouts, food shortages and a lack of investment, as government interventions, from price controls to the seizures of land and companies, squelched private enterprise.

Though his government was blessed by historically high oil prices, with a barrel hitting $150 in 2008, the economy in Venezuela [only] expanded by about 3 percent a year through his presidency, while much of Latin America boomed. (from washingtonpost.com)

Read below from a commentary “Venezuela Votes: Understanding The Outcomes Of A Momentous Day” from Forbes.com:

December 2015’s parliamentary election is the first major defeat of the socialist party in Venezuela in 17 years, and since it represented a turnout of almost 74% of the eligible population, can be said to be unquestionably representative.

The easy [part] is explaining why they voted this way:

President Maduro continues the same harmful policies, which has led to the unpopularity of his socialist party and their loss of Assembly majority in the recent elections.