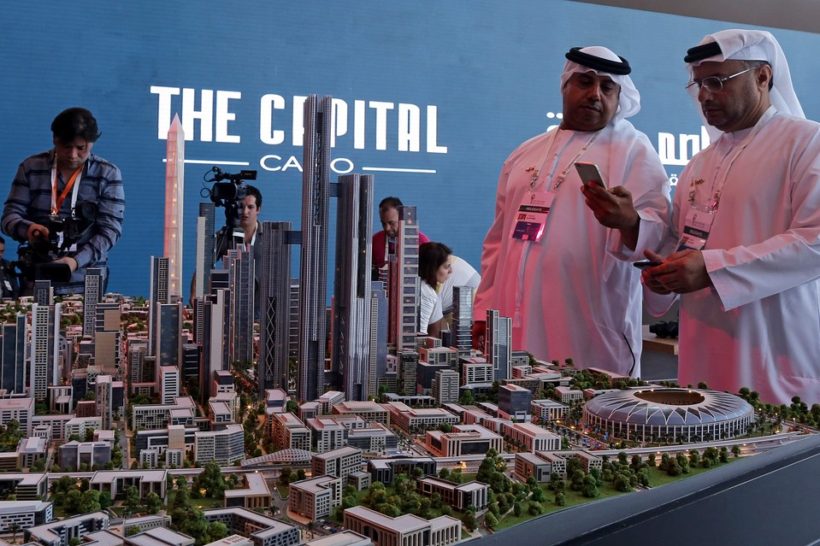 Egypt’s new administrative and business city, on the outskirts of Cairo, has been unveiled on a new website.

It says the city will house up to five million residents and be built in the corridor between Cairo and the Red Sea. There will be 1.1 million housing units and 1.75 million permanent jobs.

The city has also been officially unveiled at an Egyptian government conference at the Red Sea resort of Sharm El-Sheikh, to global investors and politicians.

The Egyptian parliament and its government departments and ministries, as well as foreign embassies, will move to the new metropolis from out of Cairo, whose urban area is home to 18 million people.

The online plans – unveiled on March 13 – say that “the masterplan is to create a global city with smart infrastructure for Egypt’s future, which will provide a multitude of economic opportunities and offer a distinct quality of life.”

It will be built over 270 square miles – about the size of Singapore. Planners say the proposed city’s site (along the corridor between Cairo and the Red Sea) “will provide linkages to significant shipping routes. The city is bound to become a focal point of the Eastern Cairo region.”

The developers are promising other facilities as well as housing and jobs, including 40,000 hotel rooms, almost 2,000 schools and colleges, and more than 600 health care facilities. …

The new capital is as yet unnamed, but it sounds like an Egyptian version of Shangri La. It’s being billed as a smart sustainable city, on a grand scale. …

The idea is to lure Egyptians away from the chaotic sprawl of Cairo – where congestion and pollution [prevail]. The authorities say it will spark a renaissance in the economy. …

Saudi-led bombing raids will continue in Yemen until Shia insurgents who have taken control of swathes of the country “withdraw and surrender their weapons,” the Arab League said on Sunday.

Officials from Sunni Arab states, attending a summit in the Egyptian city of Sharm el Sheikh, also announced plans to set up a joint reaction force to tackle uprisings in the region. The summit was attended by Abed Rabbo Mansour Hadi, Yemen’s president, who fled last week after Iranian-backed fighters known as the Houthis captured the capital Sana’a and closed in on his final stronghold in the south.

Nabil Elaraby, the secretary-general of the Arab League, said Yemen had been “on the brink of the abyss,” and that the military operation had been the only option left “to end the Houthi coup.”

Although Yemen’s conflict is the product of long-standing, localized grievances, it is morphing into a sectarian proxy war [which Saudi Arabia denies] between two of the Middle East’s biggest powers, the Sunni monarchs of Saudi Arabia and the Shia mullahs of Iran. Also playing a role is Ali Abdullah Saleh, Yemen’s former president, who has directed loyalist army units to support the Houthis. He was ousted from the leadership after the 2011 Arab Spring.

The summit was also used to work out details of a joint military task force that is being created to tackle the perceived threat from Iran and from jihadists of the Islamic State of Iraq and the Levant (Isil) [also known as ISIS] across the region. Egyptian officials said the planned reaction force would be made up of 40,000 elite troops, backed by jets, warships and tanks.

Four nights of heavy air strikes have failed to halt the Houthis’ progress through Yemen’s south and east, although the insurgents appeared to be pushed back Saturday on three fronts – in Aden’s northern suburbs, in Dhalea province, north of Aden, and the eastern province of Shabwa. Mr Hadi’s forces said they had recaptured the airport in Aden, but fighting continued in the city. The battle for Aden – bolstered on the Houthi side by child soldiers – has killed at least 68 people since Thursday. …

In the northern city of Saada, a Houthi stronghold near the Saudi border, air strikes hit rebel military bases controlled by the militia and Mr Saleh, who still commands some army units that have remained loyal to his cause.

After fighting six wars against the central government, the Houthis are well versed in guerrilla warfare.

Local people say they have repeatedly stationed their weapons in narrow residential streets.

The Houthi fighters, representing a Shia minority that makes up about a third of Yemen’s population, emerged as the most powerful force in the Arabian Peninsula’s poorest country last year when they captured Sana’a.

Yemen is also home to one of al-Qaeda’s most active affiliates, al-Qaeda in the Arabian Peninsula, and its members have used the country as a staging post from which to hatch terrorist plots against Western targets.

A group calling itself the Yemeni representative of the Islamic State has also appeared. On March 20, it claimed responsibility for attacks on two Shia mosques in Sana’a, killing at least 160 people in an act of sectarian violence that had previously been unprecedented in the country.

Uzbekistan’s Islam Karimov has been re-elected president by a landslide, according to preliminary results of Sunday’s election. The widely-predicted outcome saw Mr Karimov, who has led the country for more than 25 years, secure 90% of the vote.

Uzbek officials said that there was a 91% turnout for the vote.

Mr. Karimov, 77, has led Uzbekistan since 1989 when the country was still part of the Soviet Union, making him the only leader in the country’s history.

The Organization for Security and Cooperation in Europe (OSCE) issued a statement on Monday criticizing the election for a “lack of genuine political alternatives” to the incumbent and “persistent legal and organizational shortcomings.” The OSCE also criticized Mr Karimov for disregarding the two-term limit placed on the presidency by the Uzbek constitution.

BBC Central Asia correspondent Abdujalil Abdurasulov says that elections in authoritarian Uzbekistan are often used to boost the incumbent’s legitimacy, with high turnout helping to reinforce the image of public support for the president.

2. For EGYPT:
a) list the who, what, where and when of the news item
b) What official offices will be relocated to the new city in Egypt? In addition to over 1 million housing units and 1.75 million jobs, what additional facilities will be built in the new city?
c) What is the goal for the new city?
d) The capital city of Cairo is very crowded and polluted. What do you think of the government’s plan to build a smart, sustainable city on a grand scale? (Should they just clean up Cairo? Is this a great idea? bad idea? Why? Explain your answer.)

3. For SAUDI ARABIA:
a) list the who, what, where and when of the news item
b) A proxy war is a war instigated by a major power which does not itself become involved. Who are the two leaders of the proxy war in Yemen?
c) What do you think of the Arab League’s backing up its warning to the Houthi rebels with bombing raids? Should the Arab League be concerned about killing civilians while trying to defeat the rebels? Why or why not?

4. For UZBEKISTAN:
a) list the who, what, where and when of the news item
b) How much of the vote did President Karimov receive? Why was this expected?
c) How long has President Karimov been in office? Why should he have only served two terms?

EGYPT – Cairo Capital is a momentous endeavor to build national spirit, foster consensus, provide for long-term sustainable growth and address various issues faced by Egypt through a new city, which will create more places to live, work and visit. Read more about Egypt’s new capital at the website: thecapitalcairo.com

For details, read “Who are the Houthi rebels?” at: studentnewsdaily.com/other/who-are-the-houthi-rebels