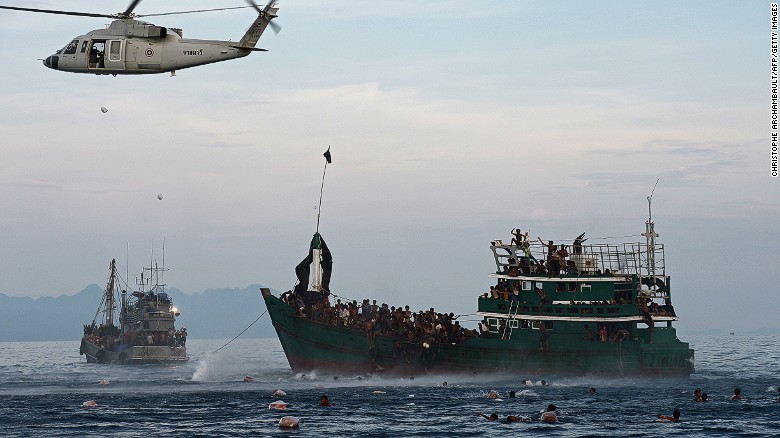 [The NY Times reports: An estimated 6,000 to 20,000 migrants are at sea, fleeing ethnic persecution in Myanmar and poverty in Bangladesh, while countries are pointing fingers at one another and declining to take responsibility themselves.]

LANGKAWI, Malaysia — A boat crammed with more than 500 refugees was found on Wednesday off the coast of Penang island in Malaysia, the latest evidence that thousands of Bangladeshis and Rohingya minority are desperately trying to reach land after being abandoned by their human traffickers.

The overcrowded boat is full of people, and there is no information if they will be allowed to come on shore, said Zafar Ahmad, who heads the Myanmar Ethnic Rohingya Human Rights Organization of Malaysia.

“We are hearing that their plight is desperate but we are unsure what the fate of the boat is. We urge the Malaysian government to give these Rohingya refugees protection and shelter,” he told The Associated Press.

The information was corroborated by another person with knowledge of the situation. The person spoke on condition of anonymity and is not authorized to speak to the media.

Government officials did not immediately answer phones when reached for comment.

Abandoned at sea, boatloads of hungry men, women and children Bangladeshis and Rohingya, members of Myanmar’s long-persecuted Muslim-minority, appear to have no place to go after Malaysia and neighboring Indonesia [both Muslim-majority countries] refused to give them refuge.

“We won’t let any foreign boats come in,” Tan Kok Kwee, first admiral of Malaysia’s maritime enforcement agency, said last Tuesday. He said Malaysia will help if the boats are not seaworthy and are sinking, otherwise the the navy will provide “provisions and send them away.”

Hours earlier, Indonesia pushed back a boat packed with hundreds of Rohingya and Bangladeshis, saying they were given food, water and directions to Malaysia – their original destination.

The refugees are victims of human traffickers who promise them safe passage from their countries to Malaysia. But in recent weeks the smugglers have fled wooden trawlers carrying the refugees for fear of being caught in a massive regional crackdown on human trafficking syndicates. In the process, they have abandoned their human cargo and set them adrift in the sea off Malaysia and Indonesia without food or fuel, and themselves escaped in speedboats.

Some estimates put the number of refugees stuck in the Malacca Strait and nearby waters at 6,000, some stranded for more than two months. Activists believe many more boats will try to reach land in the coming days and weeks.

Already, about 1,600 migrants have landed on shore in Langkawi and neighboring Indonesia, the two Muslim-majority countries that over the years have shown the most sympathy for Rohingya’s plight.

The United Nations pleaded for countries in the region to keep their borders open and help rescue those stranded, while some parliamentarians slammed the “not-in my-back-yard” attitude.

In one of the most striking examples of the refugees’ plight, Chris Lewa, a human rights activist, contacted a person on board one boat several miles off Langkawi Island by mobile phone that carried a Thai number and was kept charged by the vessel’s power supply.

The person said they had been four days without food or water, and saw a patrol boat with flashing lights approach late Tuesday. But instead of stopping, it slowly passed them by.

Lewa, director of the nonprofit Arakan Project, was still talking to that man when the boat passed by. She told the AP that she heard on the phone the refugees’ first hopeful cheers turn into sobs and screams.

Labeled by the U.N. one of the world’s most persecuted minorities, the Rohingya have for decades suffered from state-sanctioned discrimination in Buddhist-majority Myanmar. Denied citizenship by national law, the Muslim Rohingya’s are effectively stateless. Access to education and adequate health care is limited and freedom of movement severely restricted.

In the last three years, attacks on Rohingya have left 280 people dead and forced 140,000 others into crowded camps just outside Sittwe, the capital of Myanmar’s Rakhine state, where they live under abysmal, apartheid-like conditions, with little or no opportunities for work.

That has sparked one of the biggest exoduses of boat people the region has seen since the Vietnam War, with an estimated 100,000 men, women and children boarding ships in search of better lives in other countries since June 2012, according to the U.N. refugee agency. The first stop, up until recently, was Thailand, where migrants were held in jungle camps until their families could raise hefty ransoms so they could continue onward, usually to Malaysia. Recent crackdowns, however, have forced the smugglers to change tactics – instead holding people on small and large ships parked offshore until they collected about $2,000 per person.

Struggling to put a positive face on its dismal human trafficking record, Thai authorities have discovered more than 70 former camps near the border with Malaysia, the biggest of which was found Tuesday. It appeared to be newly abandoned, well-constructed and able to house as many as 800 people, said Lt. Gen. Prakarn Chonlayuth, the southern regional army commander.

Dozens of graves also have been excavated, the victims believed to be Rohingya or Bangladeshi.

A group of Southeast Asian parliamentarians released a statement calling the refusal to accept the refugees “inhumane.”

“Towing migrants out to sea and declaring that they aren’t your problem anymore is not a solution to the wider regional crisis,” said Charles Santiago, a member of parliament in Malaysia. “Any solution must include securing binding commitments from Myanmar to end the persecution of Rohingya that is fueling their exodus.”

Several navies were called upon to carry out search and rescue operations.

Capt. Chayut Navespootikorn of the Royal Thai Navy of Operation Fleet Area 3, said several boats and aircraft had been deployed to scour his country’s territorial waters, but nothing has turned up. He said his fleet was back out there looking Wednesday.

[After Malaysian officials turned back a boat with about 500 people off Penang Island on Wednesday, Deputy Home Minister Wan Junaidi told the Associated Press, “What do you expect us to do? We have been very nice to the people who broke into our border. We have treated them humanely, but they cannot be flooding our shores like this. We have to send the right message that they are not welcome here.” (from nytimes.com)]

INDONESIA – Migrants stranded at sea off Indonesia attacked each other

Migrants stranded at sea for four months off Indonesia resorted to stabbing, hanging each other and throwing passengers overboard in a desperate struggle for the last remaining food, according to those who finally made it to land.

Varying accounts said between seven and 100 people died during the fights, which apparently involved ethnic-based violence among migrants who were all from Burma and Bangladesh.

Mahmud Rafiq, 21, a Rohingya man from Burma, blamed the attacks on the Bengalis, saying they refused to give the remaining food to women and children.

“They then started hitting us. They took the food,” he said.

“They pushed many of us overboard. They beat us and attacked us with knives. I was hit with a wooden plank on the head and on my legs.”

Mohammad Abdur Rahim, 23, a Bengali, blamed the Rohingyas, saying: “Burma people do not give us any food, any water, they are torturing [us] every day.”

Lieutenant Colonel Sunarya, a local police chief in Indonesia, said: “They were killing each other, throwing people overboard.”

Iqbal Foriza, a doctor treating the refugees, said: “They were on the sea for four months, no food, no clean food, no bedding, that made the people dehydrated, and caused trauma.”

The horrific accounts came as countries in the region turned away migrants in what has been described as a “human ping pong”.

The UN urged south-east Asian nations to accept the thousands of migrants from Burma and Bangladesh believed to be stranded on boats following the recent clampdown.

Many of the migrants are oppressed Rohingya Muslims from Burma who have been described by the UN as one of the world’s most persecuted peoples.

Malaysia, the favoured destination for many of the migrants, has urged Burma and Bangladesh to try to halt the flow of migrants.

“What is the responsibility of the Myanmar government … is there any humanitarian aspect for them to solve this matter internally?” said Muhyiddin Yassin, Malaysia’s deputy prime minister.

Malaysia’s foreign minister was due to meet his Bangladeshi counterpart on Sunday and those from Indonesia and Thailand on Monday and Wednesday.

But regional efforts to solve the crisis have so far been unsuccessful, with Burma saying it will not attend a regional summit in Thailand on May 29 “if ‘Rohingya’ is mentioned on the invitation.”

Charles Santiago, a Malaysian MP and human rights promoter, said leaders in the region have “stood by and watched, celebrating their achievements at fancy dinner tables, while ignoring the human misery that their failures have produced.

“The need for effective regional action to combat the crisis is clear, yet our leaders have consistently failed to act,” he wrote in The Jakarta Post.

(The news articles above are from wire reports and staff reports posted at NY Post on May 13 and London’s Daily Telegraph on May 17.)

Answer Question #1 Background information for the major countries involved in this story (Burma, Malaysia, Indonesia and Thailand).
1. For each of the 4 countries, give the following information:
a) capital
b) location/the countries that share its borders
c) the religious breakdown of the population
d) the type of government
e) the chief of state (and head of government if different) [If monarch or dictator, since what date has he/she ruled? – include name of heir apparent for monarch] f) the population

BURMA (know as Myanmar by the ruling military junta)

THE GOVERNMENT OF BURMA:
Britain conquered Burma over a period of 62 years (1824-1886) and incorporated it into its Indian Empire. Burma was administered as a province of India until 1937 when it became a separate, self-governing colony; independence from the Commonwealth was attained in 1948.

The military has ruled since 1962, when the army overthrew an elected government that had been buffeted by an economic crisis and a raft of ethnic insurgencies. During the next 26 years, General Ne Win’s military rule helped impoverish what had been one of Southeast Asia’s wealthiest countries.

General Than Shwe, led Burma from 1992, dramatically asserted its power in 1988, when the army opened fire on peaceful, student-led, pro-democracy protesters, killing an estimated 3,000 people.  (information taken from the CIA World FactBook and FreedomHouse.org)

Southeast Asia is a subregion of Asia, consisting of the countries that are geographically south of China, east of India, west of New Guinea and north of Australia. It consists of two geographic regions:

Islam is the most widely practised religion in Southeast Asia, numbering approximately 240 million adherents which translate to about 40% of the entire population, with majorities in Brunei, Indonesia, Malaysia and in Southern Philippines.

Indonesia is the world’s most populous Muslim nation, although Hinduism is dominant on islands such as Bali, Indonesia. WHO ARE THE ROHINGYA?