News from Brazil, Italy and Australia 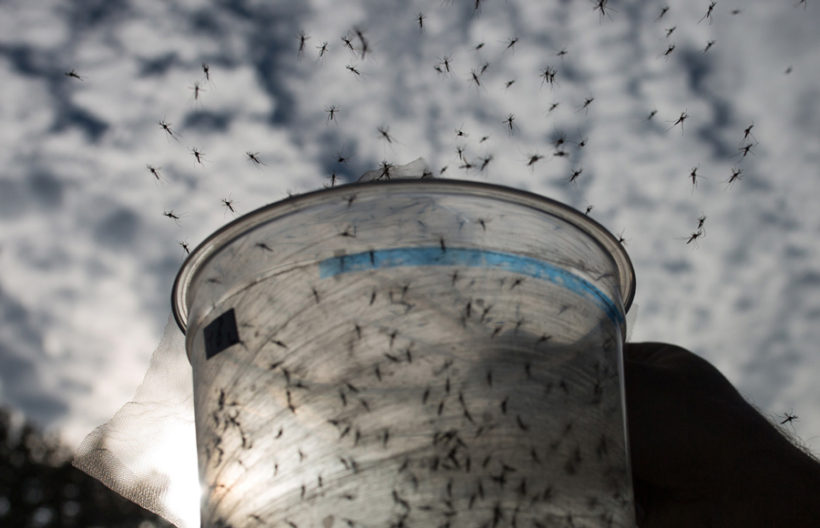 (Agence France-Presse at NDTV) – PIRACICABA – Scientists in Brazil are preparing to release millions of factory-bred mosquitoes in an attempt to wipe out tropical diseases such as Zika, dengue and yellow fever.

British firm Oxitec says its genetically modified mosquitoes will swarm in among ordinary species such as Aedes aegypti, the insect that carries these diseases.

The test tube mosquitoes method is to mate and then die, spawning babies with a genetically inbuilt flaw that causes them to die quickly.

Oxitec says its factory in the town of Piracicaba, northwest of Sao Paulo, can produce 60 million mutant mosquitoes a week.

Currently the company’s only Brazilian customer is the city of Piracicaba. Mr. Parry added, “We are having conversations with several municipalities and states.”

According to the firm, five field tests that they conducted between 2011 and 2014 – in Panama and the Cayman Islands, as well as the northeastern Brazilian state of Bahia – showed the population of wild Aedes aegypti insects dropped by 90 percent after the mutant mosquitoes were released.

Oxitec does not yet have a sales permit from Brazil’s Anvisa health department, and there are no epidemiological studies showing whether mosquito-carried diseases drop after the factory-bred insects are released.

Mr. Parry said, “We are still waiting for Anvisa [Brazil’s health department] approval – we have no date for it, but we expect it for 2017.”

This has not stopped the mayor of Piracicaba from signing a four-year, $1.1 million deal with Oxitec. In its first wave, the company will release 10 million factory-bred mosquitos each week into this city of 360,000 people.

The need for insect control is pressing, as the summer in the southern hemisphere approaches and the mosquito population – and cases of the diseases that they carry – is likely to boom.

As of July nearly 1.4 million cases of dengue were recorded in Brazil, following the record 1.6 million cases in 2015, according to health ministry figures. In the same period 174,000 cases of Zika were reported. …

The Aedes aegypti mosquito is well-adapted to city life as it can breed in even tiny amounts of water, such as a puddle of rainwater or water pooled in flowerpots.

Experts have pointed to poor sanitation and the practice of storing open water containers in poor neighborhoods as contributing factors in the explosive growth of the mosquito population.

Separately, Rio de Janeiro authorities are attempting to control their mosquito population by releasing insects inoculated with the Wolbachia bacteria, which makes them resistant to Zika, dengue and other viruses. About 20 people were injured, none fatally, when the quake struck at 7:40 a.m., three miles from the ancient town of Norcia in the Umbria region, according to Italian Prime Minister Matteo Renzi.

Lives were likely saved because 1,300 people in the region had been moved to makeshift accommodations after their homes were damaged by two previous shocks Wednesday in the Umbria and Marche regions.

Sunday’s quake was the strongest in seismically active Italy in 36 years, since a quake near Naples killed 3,000 in 1980. The Sunday temblor was linked by experts to a 6.1 quake on Aug. 24, which killed 298 and leveled the towns of Amatrice and Accumoli in the nearby region of Lazio.

“From the 10,000 people now needing assistance, we risk arriving at 100,000,” said Luca Cerisoli, the governor of the Marche region, on Italy’s Adriatic coast, after Sunday’s quake.

In Norcia, monks prayed amid ruins, and weeping nuns were escorted to safety by firefighters after the collapse of the 14th century basilica of St. Benedict — the founder of the Benedictine order of monks — leaving only its facade standing. “People are trapped in the main square, as nearby buildings may collapse. Trucks are coming to clear a path to safety,” the monks tweeted. Felt as far away as Slovenia and Croatia, the quake brought down buildings in Italian towns partly evacuated after last Wednesday’s temblor.

“Everything’s collapsed. I see plumes of smoke, it’s a disaster,” said Marco Rinaldi, the mayor of Ussita in the Marche region, which was damaged during the week.

“At the cemetery, the shocks have split open tombs and the coffins have been thrown out. It’s indescribable and people cannot take it anymore,” said Mayor Mauro Falcucci.

About 60% of the buildings in Castelluccio, a picture postcard village near Norcia that is popular with hikers, reportedly collapsed in Sunday’s quake.

Towns damaged by the Aug. 24 quake were also hit again, including Arquata del Tronto in the Marche. “It all came down. Now there is no more town,” said Mayor Aleandro Petrucci. “The few people who remained have gone out to the streets and are embracing.”

In L’Aquila, where an earthquake in 2009 killed 300, a building yet to be repaired collapsed on Sunday. The shock was felt strongly in the Italian capital, Rome, where residents poured onto the streets in panic as beds shook and  items tumbled from shelves.

“We will rebuild everything, the houses, the churches and the businesses,” Renzi said. “Everything that needs to be done to rebuild these areas will be done.”

After this year’s series of devastating quakes along central Italy’s mountainous spine, the deputy mayor of Norcia, Pierluigi Altavilla, said he was less optimistic, telling Rai News 24, “We are starting to despair. There are too many quakes now, we can’t bear it anymore.”

(BBC News) – Australia has unveiled tough new plans to bar any asylum seekers who try to reach the country by boat from ever being able to enter.

The lifetime ban on visas would apply even to those traveling as tourists, for business, or who married an Australian.

The proposed ban is to be put to parliament later this week. Even if found to be genuine refugees, they are already blocked from being resettled in Australia. They can either return home, be resettled on Manus or Nauru, or go to a third country.

The new legislation would apply to all those sent to Nauru and Manus from July 19, 2013, including those who have returned home, and anyone who arrives in the future. Children, however, would be exempt.

“This is a battle of will between the Australian people, represented by its government, and the criminal gangs of people-smugglers,” Prime Minister Turnbull said.

“You should not underestimate the scale of the threat. These people-smugglers are the worst criminals imaginable. They have a multibillion-dollar business. We have to be very determined to say no to their criminal plans.”

He added, “If they seek to bring people to Australia those passengers will never settle in this country.” The law will directly affect about 3,000 adult refugees being housed on Manus, Nauru or in Australia undergoing medical treatment.

Australia’s Labor opposition says it is yet to decide whether to back the new law.

Australia has been repeatedly criticized for its tough policy on refugees and asylum seekers.

Earlier this month, a report by Amnesty International compared its camp on Nauru to an open-air prison. Mr. Turnbull dismissed the report’s findings as “absolutely false.”

(The news briefs above are from wire reports and staff reports posted at NDTV .com (Brazil) on October 29, Los Angeles Times (Italy) and BBC News (Australia) on October 30.)

2. For BRAZIL:
a) list the who, what, where and when of the news item
b) What did field tests conducted between 2011-2014 show about the effectiveness of the genetically modified mosquitoes?
c) How effective have the genetically modified mosquitoes been in reducing the number of people who contract these diseases from mosquito bites?
d) In addition to Oxitec’s mosquitoes, separately, Rio de Janeiro authorities are attempting to control their mosquito population by releasing insects inoculated with the Wolbachia bacteria, which makes them resistant to Zika, dengue and other viruses. Do you think these are good solutions to eradicate the disease carrying mosquitoes? Explain your answer.
e) Can you think of any unintended consequences to these two solutions?  Explain your answer.

3. For ITALY:
a) list the who, what, where and when of the news item
b) Why do officials believe lives were saved when this strongest quake hit on Sunday?
c) Re-read the last two paragraphs of the Italy article. How would you try to encourage Mr. Altavilla, who is understandably discouraged?
d) Read the “Background” on Italy. Do you think the Italian government should quake-proof all buildings as experts suggest, or just rebuild any area after an earthquake destroys it? (Do you think your answer would be the same if you lived in one of the quake-prone areas?) Explain your answer.

4. For AUSTRALIA:
a) list the who, what, where and when of the news item
b) Who is the government opposing with this legislation?

c) Prime Minister Turnbull is the leader of the Liberal Party (which is actually conservative). The Liberal Party has taken a hard line on immigration policy and said the new legislation is needed to deter people smugglers who attempt to sneak people into Australia from Indonesia at an extreme cost to the individuals. The Australian government has said thousands of people have died trying to make the dangerous trip from Indonesia to Australia in boats that frequently are not safe. In 2013, the government turned the matter of tracking potential refugee and asylum-seeking ships over to the military, which now has the responsibility of turning the boats and their passengers away.
What do you think of this policy? Do you think it will be effective in deterring people from attempting to get to Australia illegally? Would you support or oppose this type of law in the U.S.? Explain your answer.

d) Watch the video under “Resources” below. Do you agree with Prime Minister Turnbull’s assertions about controlling the border in Australia? Explain your answer.