News from Brazil, Egypt and Iran 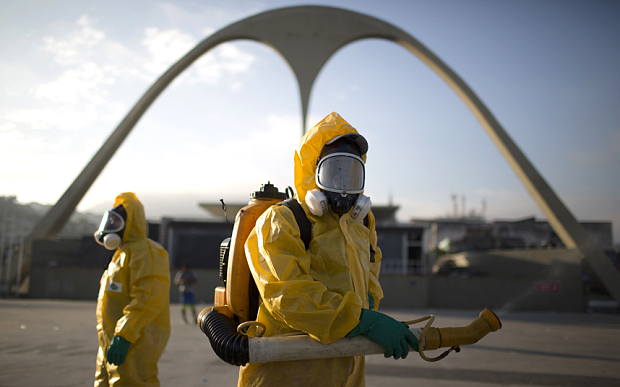 A health worker stands in the Sambadrome as he sprays insecticide to combat the Aedes aegypti mosquitoes that transmits the Zika virus in Rio de Janeiro, Brazil, Tuesday, Jan. 26, 2016. Inspectors begin to spray insecticide around Sambadrome, the outdoor grounds where thousands of dancers and musicians will parade during the city's Feb. 5-10 Carnival celebrations. Brazil's health minister says the country will mobilize some 220,000 troops to battle the mosquito blamed for spreading a virus linked to birth defects. (AP Photo/Leo Correa)

Workers in protective overalls and goggles sprayed the Sambadrome facility two weeks before it stages February’s carnival parades even as a senior official stoked further fears by suggesting that the war against Zika – thought to cause brain defects in new-born babies – was being lost.

The 90,000-capacity Sambadrome…is one of Rio’s most iconic venues and will stage the archery events during this summer’s Olympic games.

It became the unexpected focus of attention in the government’s public health campaign against Zika as Marcelo Castro, Brazil’s Minister of Health, said 220,000 troops would go door-to-door in an attempt to eradicate the virus before the carnival takes place on February 7 and 8.

Mosquito repellent would be handed out to 400,000 women on social welfare, he said.

Yet Mr. Castro appeared to undermine hopes of re-assuring the public by saying that the drive to combat the virus had come too late, prompting calls for him to be fired.

The country was “badly losing the battle” against the Aedes aegypti mosquito that transmits Zika, as well as dengue, hikungunya and yellow fever, he told a crisis meeting in Brasilia, Brazil’s capital city.

“The mosquito has been here in Brazil for three decades, and we are badly losing the battle against the mosquito,” he said in comments that were criticized as “fatalistic” by the Geneva-based World Health Organization.

Zika, a virus first discovered in Uganda and previously more common in Africa and Asia, is suspected to be a cause of microcephaly, where babies are born with unusually small heads and brain abnormalities, although no definite link has been established. Nearly 4,000 cases microcephaly cases have been discovered in Brazil since last October, compared with 150 instances for the whole of 2014.

Concern over the virus has spread, with outbreaks reported in several other Latin American countries and the Caribbean. Officials in Ecuador, Colombia and El Salvador have advised women to delay getting pregnant while America’s Centre For Disease Control and Prevention (CDC) recently cautioned pregnant women against travelling to 13 Latin American countries, as well as Puerto Rico, a United States territory, where Zika has been prevalent.

Five years after the revolution which overthrew his military predecessor, Egypt‘s President Abdel Fattah el-Sisi flooded the streets of Cairo with troops and police on Monday (Jan. 25) to prevent the anniversary being marked by repeat protests. In a televised speech, President Sisi praised the so-called “Tahrir Square” revolution that toppled President Hosni Mubarak after a rule of 30 years. The success of that revolution is still officially honored, even after the military coup which overthrew Egypt’s first freely elected leader Mohammed Morsi in 2013. [Morsi is a leading member of the Muslim Brotherhood — millions of Egyptians called for his ouster soon after he was elected.]

But in practice Mr. Sisi showed he would allow no repeat protest or attempt to imitate events of 2011. A ministry of interior spokesman told a local newspaper that any attempts at “riots” would be met firmly by the police, to the extent of shooting live rounds.

In his speech, on the eve of the anniversary, Mr. Sisi said he was trying to strike the “ideal balance between rights and freedoms.” “There should be a framework of responsible freedom that prevents it from turning into destructive chaos, which undermines the fundamentals of the state and the people’s resources,” he said. However, in the weeks leading up to the anniversary, police raided more than 5,000 homes and arrested scores if not hundreds of activists, fearing they might organize new demonstrations. …

One leaked report put the number of police and troops that were stationed around the country to prevent visible opposition at 180,000, with 600 armored vehicles of various sorts. …

In the event, the center of Cairo was eerily silent, both protesters and to an extent ordinary passers-by and cars staying away. Most shops in Downtown were closed.

The police combined with rainfall to give the streets of the Arab world’s most populous city a ghostly appearance – wet and empty, rather than thronged and dusty.

The only sign of life in Tahrir Square itself was a small pro-police demonstration. A few score people waving Egyptian flags presented flowers to police, who reciprocated in public locations around the country.

The Muslim Brotherhood had called for protests, but these were small and largely passed without incident, in locations away from the main centers of towns.

Many of the secular activists who initiated the original revolution are now living abroad, or are in jail. The Twitter hashtag “I will go down to the Square” trended but did not turn into reality. …

TEHRAN, Iran  — Iran flew a surveillance drone over a U.S. aircraft carrier and published video of the encounter Friday, the latest in a series of edgy naval incidents between the two countries in the Persian Gulf after the recent nuclear deal. This still image made from video broadcast on Iranian State television Friday, Jan. 29, 2016 shows what purports to be drone footage of a U.S. aircraft carrier. Iran flew a surveillance drone over a U.S. aircraft carrier and took “precise” photographs of it as part of an ongoing naval drill, state media reported Friday. The U.S. Navy said an unarmed Iranian drone flew near a French and American carrier earlier this month, but couldn’t confirm it was the same incident.(Iranian State Television via AP) IRAN OUT

While the U.S. Navy stressed it knew the drone was unarmed and the flyover didn’t interrupt U.S. operations in the war against ISIS, the incident underlined the continued tension over control of waterways crucial to global oil supplies. It follows a rocket test last month by the Islamic Republic near coalition warships and commercial traffic, as well as Iran’s brief capture of American sailors who strayed into its territorial waters.

Iranian state television and the semi-official Fars news agency of Iran, which has close ties to the Revolutionary Guard, published identical images Friday both said came from the drone. The footage, which The Associated Press could not independently verify, purported to show the drone being launched and then hovering over an unidentified aircraft carrier, a targeting bracket briefly passing over a jet parked on the deck below.

The Iranian reports suggested the footage was from Friday. However, Cmdr. Kevin Stephens, a spokesman for the U.S. Navy’s 5th Fleet based in Bahrain, said an unarmed Iranian drone flew near the French aircraft carrier Charles de Gaulle and “directly over” the USS Harry S. Truman on Jan. 12 as the vessels were in international waters in the Persian Gulf.

He said the Navy launched a helicopter that determined the drone wasn’t armed and “posed no danger to the ship” as the carrier wasn’t conducting flight operations at the time. His comments implied that had there been active takeoffs and landings of U.S. aircraft, the situation might have changed.

Stephens called the drone’s flight “abnormal and unprofessional.” He added that the U.S. Navy was “not in a position to verify the authenticity of the video as there are countless examples of similar footage to be found on the Internet.”

The nuclear-powered USS Harry S. Truman, based out of Norfolk, Virginia, is in the Persian Gulf region launching airstrikes and supporting operations against the Islamic State group (ISIS) in Iraq and Syria. Adm. Habibollah Sayyari, the commander of Iran’s navy, called the drone overflight “a sign of bravery.” It “allowed our men to go so close to the warship and shoot such a beautiful and accurate footage of the combat units of the foreign forces,” he told state television.

State television and the state-run IRNA news agency said an Iranian light submarine also participated in the surveillance operation. When asked about the presence of a submarine, Stephens said: “Iran has several submarines … for its current exercise,” but declined to discuss specifics.

In Washington, U.S. Navy spokesman Cmdr. William Marks stressed America remains ready to use force if necessary. “We are confident in our force’s ability to respond appropriately as the situation dictates and will defend ourselves should that prove necessary,” he said.

Iran’s navy began a naval drill this week over a 1.16-million-square-mile area including parts of the Strait of Hormuz, the Gulf of Oman and the Indian Ocean. Iran said Wednesday its navy warned a U.S. warship to leave an area of the naval drill. The U.S. Navy later denied its operations were affected.

(The news briefs above are from wire reports and staff reports posted at London’s Daily Telegraph on Jan. 26 [Brazil and Egypt] and YahooNews [Associated Press] on Jan. 29.)

2. For BRAZIL:
a) list the who, what, where and when of the news item
b) What condition is the Zika virus believed to cause (though no conclusive link has been found)?
c) What steps is the Brazilian government taking to eradicate the Zika virus?
d) What do you think about the Health Minister’s statements and the government’s attempts to combat it now?

3. For EGYPT (official name is Arab Republic of Egypt):
a) list the who, what, where and when of the news item
b) CHALLENGE: Read the commentary “Some Rare Good News from the Middle East” by Michael Mukasey, U.S. Attorney General from 2007-2009.
Contrast this view of President al Sisi with that of the news brief here, or any other news report on al Sisi. Why do you think they are different?

4. For ISLAMIC REPUBLIC OF IRAN (official name):
a) list the who, what, where and when of the news item
b) What was the problem with Iran’s drone flight over the USS Harry Truman aircraft carrier if it posed no actual danger to the ship?
c) Ask a parent: Considering Iran’s treatment of U.S. sailors and its aggressive talk and actions against our military, how do you think the next president should deal with Iran: continue Obama administration policies, or take a stronger tactic? Explain your answer.

Iran has more than 1,240 miles of shoreline facing the Persian Gulf and the Sea of Oman. Control of that territory, including the Strait of Hormuz, through which nearly a third of all oil traded by sea passes, has remained a priority for Iran’s military and it conducts regular drills in the region.

The U.S. has criticized some of those maneuvers, including what it called a “highly provocative” Iranian rocket test in December near U.S. warships and commercial traffic passing through the strait. Iran denied the test was provocative. The U.S. later released footage showing the rocket fire.

Earlier this month, Iranian forces captured 10 U.S. Navy sailors who entered Iranian territorial waters near Farsi Island, an outpost in the middle of the Gulf. The sailors were released in less than a day, though Iranian state media aired footage of the sailors’ capture [which showed them kneeling with their hand behind their heads in a humiliating surrender position]. [Note the bracketed end of the sentence is ours: the Associated Press reporter ended the line “angering U.S. politicians.” We believe the more accurate wording should be “angering the U.S. people.”]  (from the AP article above)