SAMOA – Samoa to shift back west of international dateline

APIA – The South Pacific island nation of Samoa announced plans Monday to jump forward in time by one day by switching to the west side of the international dateline – 119 years after it moved the other way in a bid to boost its trade and economy.

The move will see the independent Polynesian nation share the same date and a similar time as its Pacific neighbors, including Australia and New Zealand.

Samoa and neighboring American Samoa lied west of the international dateline until 1892, when a U.S. business trader convinced both to switch to the east, moving back to the previous day’s date. Samoa has long marketed itself as the last place on earth to see the sun each day.

“A local trader lobbied successfully for the change as it was convenient for trading ships from Europe and the United States that were servicing Samoa at the time,” Tuilaepa said in a statement. “But our trading partners have dramatically changed since, and today we do a lot more business with New Zealand and Australia, China and Pacific Rim countries such as Singapore.”

Tuilaepa said Samoa is currently losing out on two working days a week doing business with New Zealand and Australia.

“While it’s Friday here, it’s Saturday in New Zealand, and when we’re at church Sunday, they’re already conducting business in Sydney and Brisbane,” he said.

The shift will put the dateline between Samoa and American Samoa, a U.S. territory, but Tuilaepa said that would create “exciting tourism opportunities.”

At Mount Herzl in Jerusalem, Israel’s national cemetery, Israelis kindled 12 huge torches to signify the start of the holiday marking Israel’s 63rd birthday. Soldiers marched in formation, and fireworks lit up skies across the nation on a mild spring evening. …..

Cities and towns set up outdoor stages for singers and dance troupes to provide entertainment late into the night.

In contrast to Memorial Day, when Israelis visit to cemeteries and share tales of survivors and sad recollections of wartime losses, Independence Day is a joyful celebration when people flock to picnics, parties and hikes in natural reserves….

Military bases were opening for visits, and the Israeli air force planned flybys over much of the country as part of the festivities.

The grouping of mournful Memorial Day with Independence Day celebrations is intentional, to show the link between the costly wars Israel has fought and the establishment and survival of the Jewish state.

The state was founded on May 14, 1948, when the British mandate over Palestine ended. (see “Background” below)

Israel celebrates its Independence Day according to the Hebrew calendar. Palestinians, in contrast, mark the occasion with a day of mourning, calling the creation of Israel “al-Naqba,” Arabic for catastrophe… 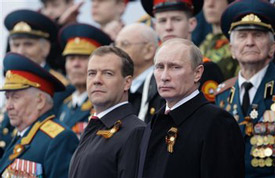 The parade, marking the surrender of Nazi Germany in World War II, is the centerpiece of Russia’s most solemn secular holiday, both commemorating the Soviet Union’s enormous sacrifices in the war and asserting the potency of its modern military.

The 20,000 troops who strode in precision formation through the vast square outside the Kremlin were followed by more than 100 pieces of mobile military hardware, from armored personnel carriers to…Topol-M intercontinental ballistic missile launchers. It concluded with a squadron of helicopters carrying flags over the square but, unusually for recent years, did not include warplanes.

Although Russian armed forces suffered from severe funding shortages and morale problems in the early years after the collapse of the Soviet Union, the parade put forth the image of a spit-and-polish and vigorous military, with an emphasis on discipline and precision. The parade announcer even praised the “maximal synchronization” with which the cars carrying Defense Minister Anatoly Serdyukov and Moscow Military District commander Col.-Gen. Valery Gerasimov approached each other in the center of the square.

Medvedev told the crowd, which included many war veterans festooned with medals and ribbons, that restoring the military would continue. …..

“Today Russia firmly upholds the principles of peaceful cooperation, consistently advocates for a security system and contributes to the overall effort to maintain global stability in the world,” he said in the speech from a tribune set up in front of the Lenin Mausoleum.

The mausoleum, the focal point of the square, was hidden behind an elaborate scrim painted to mark the holiday, reflecting the symbolic delicacy of commemorating a victory achieved by the Soviet regime that is now largely discredited. Some of the marching military units carried period flags bearing the Communist hammer-and-sickle emblem.

(The news briefs above are from wire reports and staff reports posted at: the San Diego Union-Tribune’s signonsandiego.com on May 8th and 9th.)

2. For Samoa:
a) list the who, what, where and when of the news item
b) For what reason has the Samoan government decided to make this change?

3. For Israel:
a) list the who, what, where and when of the news item
b) Why does Israel celebrate Independence Day immediately after Memorial Day?

4. For Russia:
a) list the who, what, where and when of the news item
b) The surrender of Nazi Germany is celebrated as Victory Day on May 9th in Russia. What do we call the day the Nazis surrendered, commemorated by Western powers including the U.S. on May 8th?

HISTORY OF ISRAEL: (from the U.S. State Department website at state.gov/r/pa/ei/bgn/3581.htm#profile)

SAMOA: Read about the international dateline at worldatlas.com.