NEW DELHI | India is home to 17 percent of the world’s people, as its population climbed to 1.21 billion this year, though growth actually slowed for the first time in 90 years, census officials said Thursday.

The South Asian nation – second only to China in number of people – added 181 million in the past decade, said C. Chandramouli, the census commissioner. That increase alone is nearly the entire population of Brazil.

United Nations projections show that India could overtake China and its 1.34 billion people as the world’s most populous nation by 2030, though Mr. Chandramouli said a more rigorous analysis of data would be needed before India made its own projections.

India’s population is nearly equal to the combined populations of the United States, Indonesia, Brazil, Japan, Bangladesh and Pakistan, he said.

Yet the 17.6 percent increase was down from 21.5 in the last count a decade ago. 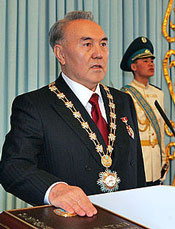 Preliminary results were to be announced early Monday.  [Four exit polls run by government-friendly institutes late Sunday estimated that Nazarbayev received an average 95 percent of the vote. Approximately 90% of the 9 million eligible voters reportedly cast ballots.] Early voters and 18-year-olds casting their ballot for the first time were rewarded with household goods, such as food blenders and electric kettles.

Mr. Nazarbayev (see photo), a 70-year-old former Communist Party boss, has ruled Kazakhstan virtually unchallenged since the 1980s, when it was still part of the Soviet Union.

Opposition politicians refused to take part in the election, called for a boycott and described the vote as a sham. [No previous elections in Kazakhstan have ever been judged free and fair by independent monitors.  International observers criticized this election, saying it failed to meet international democratic standards.  Nearly 400 monitors in the country had complained prior to the election about the lack of transparency, competition and media freedom.]

ZAMOSC | Seventy-two years after the Nazis arrived, the Polish town of Zamosc is getting its synagogue back.

One of the most important surviving synagogues in Poland, a Renaissance gem looted by the Nazis and suffering from decades of neglect, is reopening this week after a meticulous restoration, part of an effort to reclaim the country’s decimated Jewish heritage.

The refurbishing of the synagogue in Zamosc, an eastern Polish town near the border with Ukraine, comes as Poland’s tiny remaining Jewish community is struggling to preserve some of the most important Jewish sites that survived the Holocaust before they fall into irreversible decay.

But in a sign of how thorough Adolf Hitler’s genocide was, there are almost no Jews left in the town. The cream-colored house of prayer now will serve largely as a place for art exhibitions, concerts and other cultural events in the largely Catholic area.

“The people, they are gone,” said Michael Schudrich, Poland’s chief rabbi. “But at least in their memory, we can do the best to preserve that which remains.”

The population of Zamosc, an exquisite Renaissance town recognized as a UNESCO World Heritage site, was 40 percent Jewish on the eve of World War II. Today, there could be a handful of Jews in the town of 65,000, but nobody really knows for sure, since people here often still hide their Jewish roots, scarred by the trauma of the war and the anti-Semitism of the communist era that followed.

(The news briefs above are from wire reports and staff reports posted at:  washingtontimes.com World Briefs on March 31st, World Scene on April 3rd and Briefly on April 3rd.

1. For each of the 3 countries, give the following information:
a) the countries that share its borders
b) the religious breakdown of the population
c) the type of government
d) the chief of state (and head of government if different) [If monarch or dictator, since what date has he/she ruled? – include name of heir apparent for monarch]e) the population

3. For Kazakhstan:
a) list the who, what, where and when of the news item
b) What did early voters and those voting for the first time receive at the polls?
c) In general, approximately 54% of Americans eligible to vote do so in presidential elections. What percent of Kazakhstani voters turned out for President Nazarbayev’s election?
d) What do you think about the gifts some voters received? Explain your answer.

4. For Poland:
a) list the who, what, where and when of the news item
b) Why will the synagogue be used mainly for art exhibitions, concerts and other cultural events instead of for religious services?

See before and after photos of the restored synagogue at fodz.pl//?d=8&id=249&l=en.