Teachers who fail to show up in classrooms Monday will be suspended without pay, according to the president’s decree, which was read on radio and television stations. If teachers don’t appear by April 4, they will be fired.

Mr. Lobo said he has the power to dissolve the teachers unions for backing the strike.

The protesters oppose a proposed law that would give parents oversight of schools and they say the government owes six months of back pay to 6,000 teachers. They are also demanding the return of leftist former President Manuel Zelaya, who was ousted in 2009 … [by the nation’s Supreme Court, Congress and military after he sought to illegally amend the constitution to extend presidential term limits so he could run for office again].

Mr. Zelaya’s term ended in January 2010, but many Zelaya backers argue that Mr. Lobo’s election was illegitimate because it occurred under an interim government installed by the coup.

A judge last week dropped arrest warrants against Mr. Zelaya so that he can return without fear of arrest, but the former leader, an ally of Venezuelan President Hugo Chavez, said he fears he will be killed if he comes back.

DUBAI | …A French skyscraper climber successfully scaled the world’s tallest building Monday, even navigating the tapered spire that extends beyond the top floors of the Dubai structure.

Alain Robert’s climb up the 2,717 foot-tall Burj Khalifa, took just over six hours. As night fell, a row of powerful spotlights shone on the side of the tower as Robert climbed.

Unlike on many previous climbs, the 48-year-old daredevil used a rope and harness to comply with organizers’ requirements in the Gulf sheikdom that opened the tapering metal and glass tower in January last year. An ambulance, with a stretcher at the ready, was parked alongside other emergency vehicles at the Burj’s base.

Robert has climbed more than 70 skyscrapers, including the Empire State Building, Chicago’s Willis T ower and the Petronas Towers in Kuala Lumpur, according to his website. He conquered Taiwan’s Taipei 101, which before the Burj was the world’s tallest building, in 2004. …..

Hours before the climb, Robert told The Associated Press he hoped to go all the way to the top, but acknowledged it would be difficult to go past about 2,296 feet freehand without the aid of additional equipment, because of the spire’s tapered design.

In the end, he scrambled up the spire quickly and hung triumphantly from the top. ….. 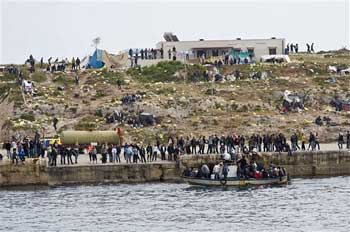 LAMPEDUSA | Exasperated Italian fishermen towed empty boats seized from illegal immigrants across the entrance of Lampedusa’s harbor on Monday to try to prevent any other vessels carrying North Africans from reaching the tiny island in the Mediterranean Sea.

Other islanders overturned garbage bins to protest the relentless arrival of illegal immigrants, including many now coming from Libyan shores.

“Enough, we’re full,” read a slogan scrawled on a white sheet and carried by two protesters.

More than 3,000 new migrants have arrived in the last three days alone on the island of 5,000 residents, which lives off tourism and fishing. With the shelters on the island full, the migrants, many of them Tunisian men who fled the unrest in their homeland, have taken to sleeping on the docks or in makeshift tent camps in fields.

The island has been flooded with more than 15,000 migrants since mid-January, when Tunisians overthrew their longtime strongman, but hundreds have been transferred to centers in other parts of Italy. The island is 60 miles (100 kilometers) east of the Tunisian coast, closer to Africa than the Italian mainland. …..

Italy has promised to increase in the coming days the number of naval transport ships assigned to transfer the migrants from Lampedusa to detention centers elsewhere. …..

(The news briefs above are from wire reports and staff reports posted at:  washingtontimes.com on March 27th and San Jose mercurynews.com and the San Diego Union-Tribune at signonsandiego.com on March 28th.)

1. For each of the 3 countries, give the following information:
a) the continent on which it is located
b) the name of the capital city
c) the type of government
d) the chief of state (and head of government if different) [If monarch, since what date has he/she ruled? – include name of heir apparent]e) the population

2. For Honduras:
a) list the who, what, where and when of the news item
b) For what reasons are the teachers striking? (What demands have they made?)
c) What do you think of President Lobo’s warning to the teachers? Explain your answer.

3. For United Arab Emirates:
a) list the who, what, where and when of the news item
b) How many other skyscrapers has he climbed – name those listed.
c) Watch the video of Mr. Robert under “Resources” below. What do you think of his drive to scale these many skyscrapers? Explain your answer.

4. For Italy:
a) list the who, what, where and when of the news item
b) What is the population of Lampedusa?
c) How many new illegal immigrants have arrived at the island of Lampedusa in the last 3 days? in the last two months?
d) The residents of Lampedusa earn a living mainly by tourism and fishing. Among other reasons for being frustrated by the inundation of illegal immigrants, they likely feel it is harming their ability to earn a living. How do you think the Italian government should handle the problem?

After his election in 2006, President Zelaya moved to the left, and aligned himself with the nine-nation Bolivarian Alliance for the Americas (ALBA), a bloc led by Venezuelan President Hugo Chavez.

In an echo of earlier maneuvering by Chavez and others, Zelaya sought to amend the constitution to extend presidential term limits. He defied both the Supreme Court and the Honduran legislature in pressing for a referendum on the subject.

When the head of the army refused to help Mr. Zelaya carry out the illegal voting exercise, Zelaya fired him – and then refused a Supreme Court order to reinstate him.

The Supreme Court ordered the army to remove the president “to defend the rule of law,” and the National Assembly then appointed Roberto Micheletti [who was president of the Congress] as a new acting president to serve until January 2010, when Zelaya’s term was to have ended. [elections for the new president were held November 29, 2009]

“Zelaya pursued his ambition with total disregard of his country’s constitution,” observed Kevin Casas-Zamora, senior fellow at the Brookings Institution, noting that the president’s plans had been opposed by the Supreme Court, lawmakers, business, the media, the country’s electoral tribunal and nearly all political parties, including his own. (from cnsnews.com/news/print/50455.)

According to the Associated Press, “The fiercest criticism [against the Honduran government’s ouster of Zelaya] had come from Hugo Chavez, the socialist president of Venezuela. [Chavez] called for Hondurans to rise up against the ‘gorilla government’ and vowed to do everything possible to overthrow it and restore his leftist ally, Zelaya.”

On November 29, 2009, Hondurans elected Porfirio “Pepe” Lobo as President in a previously scheduled free and fair election that attracted broad voter participation. Lobo received the largest number of votes for a presidential candidate in Honduran history. President Lobo was sworn in on January 27, 2010. (from state.gov/r/pa/ei/bgn/1922.htm)

Lampedusa is an island located in the Pelagie group of Islands in Sicily in Italy. The island is the largest one in the group of islands and is the southernmost island in Sicily; it is situated in the middle of the Mediterranean Sea. The island is only [2 miles] wide and is [7.4 miles] long. Lampedusa has a very vibrant culture and a historic past since over the centuries it had been inhabited by quite a lot of different nationalities and tribes including the Romans, Arabs and Greeks. (from lifeinitaly.com/tourism/sicily/lampedusa)

UNITED ARAB EMIRATES – Wach a brief video of some of the buildings Alain Robert has climbed: