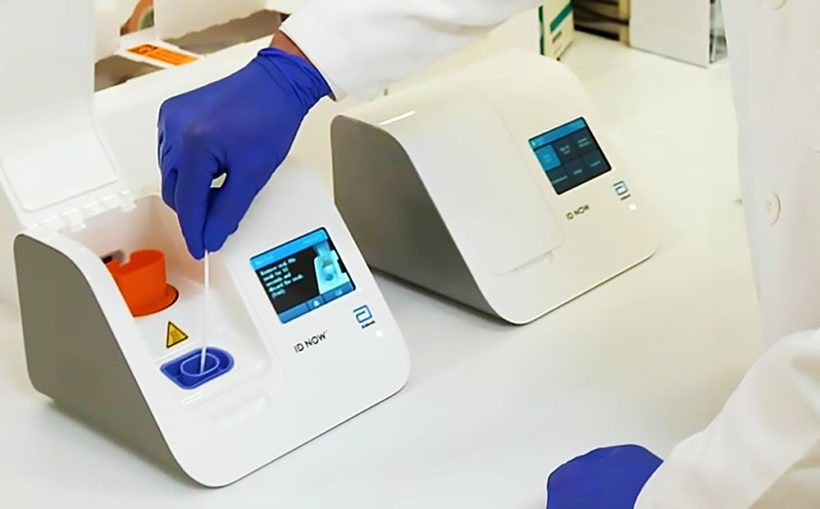 The U.S. Food and Drug Administration (FDA) issued Emergency Use Authorization to Illinois-based medical device maker Abbott Labs on Friday for a coronavirus test that delivers positive results in as little as five minutes and negative results in 13 minutes, the company said.

The company expects the tests to be available next week and expects to ramp up manufacturing to deliver 50,000 tests per day.

“I am pleased that the FDA authorized Abbott’s point-of-care test yesterday. This is big news and will help get more of these tests out in the field rapidly,” FDA Commissioner Steve Hahn said in a statement. “We know how important it is to get point-of-care tests out in the field quickly. These tests that can give results quickly can be a game changer in diagnosing COVID-19.”

The new test comes in the form of a small cartridge that fits in the palm of your hand, said John Frels, Abbott’s vice president of research and development.

The test runs on the company’s ID NOW platform, a 6.6-pound portable device the size of a small toaster. There are currently about 18,000 ID NOW instruments in the U.S. – the most widely available molecular point-of-care testing platform in the nation, Frels said.

Unlike high-throughput batch testing platforms that can run hundreds of tests at a time but take several hours, the ID NOW platform is a bench-top instrument used at physician offices and urgent care clinics. The platform is typically used to run tests for other respiratory illnesses, such as the flu, strep and RSV – and similarly uses samples from throat and nose swabs.

Last week, the FDA approved another coronavirus test from Abbott, the m2000 RealTime SARS CoV-2 EUA test, which is used for large batch testing at university and community hospitals. Between the two platforms, Abbott expects to produce about 5 million tests per month.

“We believe that this pandemic is going to be fought at a number of levels, starting with the diagnostic [testing] front being able to clear the backlogs in testing. That’s done by making high-volume throughput tests available and at the front lines as patients present themselves at urgent care,” Frels said.

Abbott did not immediately say if it planned to manufacture more ID NOW platforms, in addition to the new test cartridges. Company spokesperson Darcy Ross said the company was working with the Trump administration to determine where the tests would be sent.

Other companies have also received Emergency Use Authorization from the FDA, which allows for the use of unapproved medical devices during a public health emergency.

The U.S. has struggled to ramp us testing across the nation, and, in the early days of the outbreak, the Centers for Disease Control and Prevention initially developed and mailed flawed testing kits. Many doctors have reported rationing tests to prioritize the most vulnerable. …

While there are no official nationwide testing totals, the COVID Tracking Project, an online effort started by two journalists to track the number of tests conducted in the U.S., said Friday that more than 620,000 tests had been completed nationwide – the most tests conducted by any country.

But the U.S., with a population of about 329 million, is not leading the world in the number of tests conducted per capita. South Korea, a country of about 51 million, had tested more than 370,000 people as of Friday, according to health officials. Italy, which has a population of 60 million and has reported the most coronavirus-related deaths, had tested more than 390,000 people, according to health officials.

Dr. Deborah Birx, the White House’s coronavirus response coordinator, said in a Friday briefing that about 95% of testing in the U.S. is being done in commercial labs. The $2.2 trillion stimulus package approved Friday will require those labs to report total testing numbers, Birx said.

Published at usatoday .com on March 28, 2020. Reprinted here for educational purposes only. May not be reproduced on other websites without permission from USA Today.

1. How does Abbott Labs new coronavirus test differ from the current tests available?

2. How many tests does Abbott say they will be able to produce per day?

3. a) What additional coronavirus test from Abbott did the FDA approve last week?
b) Between the two tests, how many does Abbott expect to produce per month?

4. a) What is the FDA’s Emergency Use Authorization?
b) Which additional companies have received this authorization for tests?

5. How does this news encourage you?