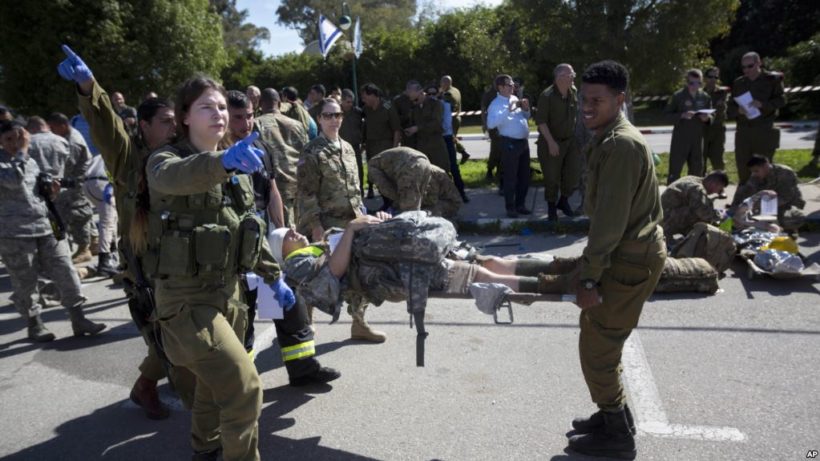 In this Tuesday, March 1, 2016 file photo, American servicemen and Israeli soldiers participate in a joint drill simulating a rocket attack at a base in Hatzor, central Israel. Israel is making contingency plans to evacuate up to a quarter million people from communities along the Gaza and Lebanese borders to get them away from missile attacks if war erupts again with Hamas or Hezbollah. The mass evacuations would be the biggest in Israel's history, part of a bigger plan where the army works with municipalities to keep civilians safe. (AP Photo/Sebastian Scheiner, File)

(by Anna Ahronheim, The Jerusalem Post) – Israel’s Home Front Command has a contingency plan to evacuate hundreds of thousands of residents who live on the border with Lebanon, a senior Israel Defense Forces (IDF) officer in the [Home Front] Command told The Jerusalem Post on Wednesday.

Close to a million Israelis live in the North; an estimated quarter of a million could be evacuated in case a war breaks out with Hezbollah.

“In the past we didn’t think of needing to evacuate whole communities, but now we understand that we will have to evacuate hundreds of thousands of people,” the senior officer said.

Hezbollah’s technological abilities and battlefield experience have grown as it fights in Syria for the regime of Bashar Assad.

“There have been significant regional changes that no one expected to happen,” the senior officer said, adding that “the changes on Israel’s borders have made it so that the IDF needs to prepare for wars against groups and not armies.”

“We always need to ask if we are relevant and prepared,” he said, and that is why it is not only the threat posed by Hezbollah rocket barrages that concern the IDF and the Home Front Command but the very real possibility of ground attacks by the terrorist group against civilian communities.

“We listen to everything that Hezbollah’s [leader] Hassan Nasrallah says, and we understand that there is a real meaning behind his threats. In the past we used to tell the civilians to go to their bomb shelters, but now we know that it is not smart to have civilians on the front lines in times of war,” he said.

“It is impossible to evacuate all one million residents, but we are working with the communities as well as emergency services to prepare those living in communities directly on the border for the possibility of a mass evacuation.”

The communities that would be evacuated would be housed in hotels, schools or guest houses of other communities, such as those in the Jordan Valley, Jerusalem, Eilat, as well as in West Bank settlements, away from the front lines in the North, in their entirety, he said, adding that, depending on the situation, whole communities could be housed together.

According to the senior officer, the Home Front Command will work hand in hand with the Northern Command, now headed by Maj.- Gen. Yoel Strick (who was the head of the Home Front Command until last week), as well as with emergency services and volunteers, to make the evacuations as organized and as possible. While the IDF thinks Hezbollah is unlikely to attack Israel in the near future, the Lebanon border remains the most explosive one, and both sides have warned that the next conflict would be devastating.

Hezbollah is known to have rebuilt its arsenal since the Second Lebanon War in 2006, with at least 100,000 short-range rockets and several thousand more missiles that can reach central Israel, including Tel Aviv.

In February, Nasrallah, the terrorist organization’s leader, warned that

“Israel should think a million times before waging any war with Lebanon,” as in the next war with Israel, his fighters would have “no red lines.”

According to some Israeli analysts, the next war with Hezbollah might see 1,500-2,000 rockets shot into Israel per day, compared to the 150-180 per day during the Second Lebanon War in 2006.

Israel has made it clear that it will continue to work to prevent Hezbollah from acquiring advanced weaponry, reportedly striking weapons convoys in Syria destined for the group, including last Friday when the army made a rare admission of a strike in Syria after a surface to- air missile was fired by the Syrian regime against IDF jets.

It was the most serious clash involving the IDF since the civil war broke out in Syria six years ago.

Reprinted here for educational purposes only. May not be reproduced on other websites without permission from The Jerusalem Post. For the original article, visit jpost .com.

1. List the following information for Israel: (see the CIA World FactBook website for answers)
a) capital
b) location/the countries that share its borders:
c) the religious breakdown of the population:
d) the type of government:
e) the chief of state (and head of government if different):
f) the population:
g) the land size of Israel (and compared to the U.S.

3. What are the following groups? (Do an internet search or see “Background” below the questions for the answers)
a) Home Front Command
b) IDF
c) Hezbollah

4. How many residents does the Command think would be evacuated, should war break out?

5. a) What type/amount of weaponry has Hezbollah acquired since 2006?
b) How would this increase the number of rockets shot into Israel per day compared to the Second Lebanon War in 2006?

6. What has Israel been doing to prevent Hezbollah from obtaining more weapons?

7. What do you think of the IDF’s:
a) preventative military strikes
b) preparations to protect civilians

Hezbollah, whose name means “party of God,” is an Islamic terrorist group believed responsible for nearly 200 attacks between 1982-2008 that killed more than 800 people.  It was founded in 1982 in Lebanon’s Bekaa Valley by a Shia clergyman educated in Iran.  Hezbollah’s stated objectives include:

For information on Hezbollah, go to cfr.org.