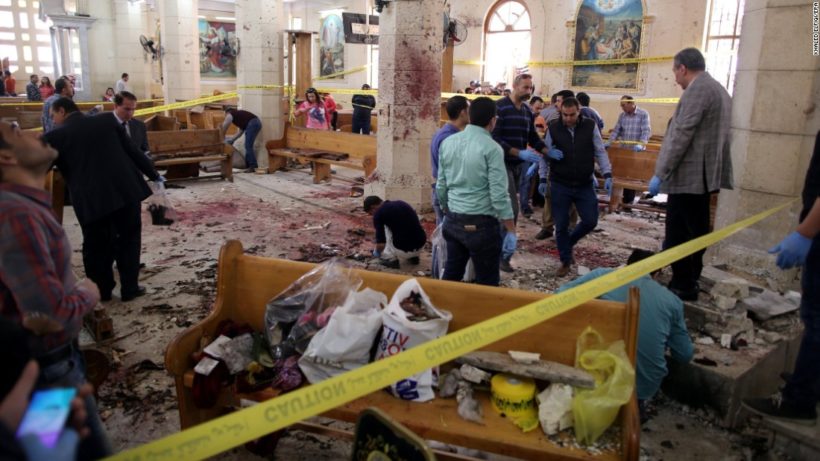 Security personnel survey the scene of a bomb blast at St. George’s Church in Tanta, Egypt, on Palm Sunday. (CNN)

(by Bruce Golding, New York Post) – At least 44 people were killed and more than 100 wounded in Palm Sunday blasts at two Coptic Christian churches in Egypt for which ISIS claimed responsibility.

The bombings targeted worshippers celebrating the start of Holy Week, the most sacred period in the Christian calendar, and came less than three weeks before a scheduled visit to Egypt by Roman Catholic Pope Francis.

Coptic Pope Tawadros II narrowly avoided being caught in one attack while leading Mass at St. Mark’s Cathedral in the coastal city of Alexandria, where a deadly explosion erupted at security checkpoint outside.

Surveillance video broadcast on Egyptian TV showed a suspect with a blue sweater draped over his shoulders being turned away from the main gate and sent toward a metal detector outside the church, which members of the country’s beleaguered Christian minority attend.

The man then passed by a female officer chatting with another woman before they were all engulfed in a fireball that killed at least 17 people, including four police officers, and wounded at least 40.

The other blast, which occurred earlier, tore through the inside of St. George’s Church in Tanta, which sits east of the Nile River between Alexandria and the country’s capital, Cairo. Video from a local news report shows deacons chanting and ringing a bell before a test pattern fills the screen, followed by audio of explosion and screams.

In grisly images of the aftermath, victims lie amid rubble and papers while blood stains the floor, shattered pews and marble columns of the historic church.

“I just felt fire grabbing my face,” a hospitalized victim told state TV. “I pushed my brother, who was sitting next to me, and then I heard people saying, ‘Explosion!’”

Another survivor told Reuters she saw “body parts scattered” after the blast, which killed at least 27 people and wounded at least 78.

Sunday’s attack followed the defusing of a bomb found outside the church on March 29.

ISIS released a statement claiming that two terrorists wearing suicide vests were responsible for the carnage.

“Crusaders and their apostate allies should know that the bill between us and them is very big and they will pay it with rivers of blood from their children, God willing,” the statement warned.

Egyptian President Abdel Fattah al-Sisi declared a three-month state of emergency in a defiant speech at the presidential palace after a meeting of his National Defense Council [amid fears that ISIS jihadists — who have long been battling security forces in the Sinai Peninsula — are shifting their focus to Egypt’s Coptic minority.] He warned that the war against Islamic radicals “will be long and painful.”

In December, a massive church bombing killed 30 people in Cairo, and several killings in the Sinai have caused hundreds to flee to safer areas.

Earlier Sunday, al-Sisi ordered the military to guard “vital and important infrastructure,” and state TV reported that the provincial head of security had been fired and replaced.

In two tweets, President Trump, who last week met with al-Sisi at the White House, wrote, “So sad to hear of the terrorist attack in Egypt. U.S. strongly condemns. I have great confidence that President Al Sisi will handle situation properly.”

…Worshippers at St. George Coptic Orthodox Church in Brooklyn bemoaned the lack of protection for Egypt’s 9 million Christians, who make up just 10 percent of the country’s population.

“There should have been more security, because this is something that is known in Egypt: that Christians are always being persecuted, especially on their holidays,” said Paul, 24, a native Brooklynite who visits relatives in Egypt every summer — and who, fearing for their safety, asked not to use his last name. “Their cops aren’t trained well or paid well, and they don’t care about Christians.”

Mina Kolta, 31, said a friend’s cousin was among the victims in Alexandria.

“I feel that my church and relatives and friends are definitely persecuted in Egypt,” he said. “Egypt is a beautiful country, but unfortunately, it is plagued by people who want to destroy it.”

Reprinted here for educational purposes only, from the New York Post. May not be reproduced on other websites without permission from NYPost .com.

1. List the following information for Egypt: (see the CIA World FactBook website for answers)
a) capital:
b) location/the countries that share its borders:
c) the religious breakdown of the population:
d) the type of government:
e) the chief of state (and head of government if different):
f) the population:

3. What are Copts? What percent of Egypt’s population are Copts?

4. a) How many Christians were killed / wounded by Islamic terrorists in Egypt on Palm Sunday?
b) How many were killed in a previous December church bombing in Cairo?
c) Why have hundreds of Copts left Sinai recently?

5. a) How did Egyptian President al Sisi react to the latest terrorist attacks on Egyptian Christians? Be specific.
b) What do you think of his response?

6. Holy Week in Christianity is the week just before Easter. Easter is a Christian holiday celebrating the resurrection of Jesus from the dead. (Jesus is the Son of God, who came to earth as a man, to suffer and die for the sins of all mankind so that through Him, we might be forgiven of our sins and saved from eternal punishment in Hell.) Read about Jesus’ crucifixion and resurrection from the dead in any of the four gospels in the New Testament of the Bible, which is God’s word. (Matthew, Mark, Luke or John)
Why do you think the ISIS terrorists attacked Egyptian Christians during their church service on Palm Sunday, the beginning of Holy Week?

Persecution of Coptic Christians (Read about attacks on Copts at wikipedia)