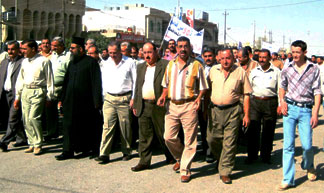 (by Mindy Belz, WorldMag.com) HAMDANIYAH, IRAQ – For a Sunday morning in Hamdaniyah the men were out early. They lined sidewalks and gathered in clusters on the street, toting banners, chain-smoking, and speaking to local television cameras.

Hamdaniyah is one of the largest towns in Iraq’s Nineveh province, an area with historic Christian roots and a strong contingent of Assyrian political parties. Organizers and some church leaders, together with other minorities, came together Sept. 28 to begin what likely will be a week of protests over the election law passed by Iraq’s parliament last week.

Throughout Iraq others are questioning the parliament’s decision to delay a provincial vote in Kirkuk while allowing elections to move forward in the country’s other 17 provinces. But the opposition in Nineveh has a different complaint: Baghdad lawmakers also scrapped a clause known as Article 50 that could have guaranteed seats for Christians and other minorities.

Article 50 called for seats on provincial governing councils to be apportioned according to the demographic makeup of each province so that minorities would have a guaranteed voice even if one party or ethnic group dominated at the polls. The problem is that since the war and lingering terrorist activity have uprooted millions of Iraqis, no census has been conducted to accurately show how many seats should go to which group.

In Nineveh a census likely would show that more Christians live here than ever before. Assyrians and Chaldeans who lived in Baghdad and other hotspots, along with people who have fled violence in Mosul (the provincial capital) are taking refuge in the historic Christian villages of the Nineveh Plain and in towns like Hamdaniyah.

Even without counting the displaced, many Assyrians believe they are underrepresented on the Nineveh provincial council: Currently only three of 41 members are from what are considered Christian parties. (There used to be six Assyrian Christian council members but three were removed and replaced, according to a council member, because they were involved in a financial scandal.) Of Sunday’s event, said Hamdaniyah mayor Nissan Karumi, “We are demonstrating our demands for full autonomy for our people-this was provided for by our constitution in Article 50 and endorsed by the U.N.”

By 11 a.m. the streets were full of several thousand demonstrators. They formed a thick snake through the streets of downtown, flanked by Iraqi police and the Iraqi army in trucks with mounted gunners. Then they gathered outside government offices in the blazing midday sun for speeches. Similar demonstrations are planned throughout the region and as far north as Dohuk, a largely Kurdish city that also has become home to an estimated 10,000 displaced Iraqis, largely from Mosul.

Baghdad’s response to the outcry was swift: Iraqi Prime Minister Nouri al-Maliki issued a statement on Sunday interpreted as support for the claims of the Christians. “We hoped parliament would approve the draft submitted by the cabinet, which included protection of the representation for minorities according to the constitution,” he said. Maliki called on parliamentary leaders “to find a solution and remove the feeling of worry, a feeling of being oppressed or alienated, which has affected real communities who are proud to be Iraqis.”

The election law passed by parliament must be approved now by a presidency council consisting of President Jalal Talabani, who is Kurdish, and two vice presidents before it becomes law. Talabani is sympathetic to the claims of Christians and other minorities (which include Yezidis, Shebaks, and Turkmen), but he already has rejected one version of the law, and the drawn-out debate over provincial elections already has delayed a vote for nearly a year.

But behind the quest for apportioned provincial voting is a larger motive: Many Assyrian and Chaldean leaders are pressing for a Christian autonomous region in Nineveh. Their plan may fall on deaf ears in Baghdad but has a powerful advocate to the north in Sarkis Aghajan Kurdish, the regional government finance minister. Aghajan himself is Assyrian but has been a member of the Kurdish government since 1992, serving as its deputy prime minister from 2004 to 2006. I met with Aghajan Monday, and he told me the autonomous region he envisions would stretch from the Syrian border to the north at Fishkabor (currently part of the Kurdish regional government) to Hamdaniyah. “It will have its own parliament, executive council, constitution, budget, logo, and flag,” he said. “We are trying to secure our people in an area where they currently live.”

But Iraq has many Christians who live outside this area and do not share the region’s ancient roots. Some pastors I’ve talked to fear that a regional divide like that will make them more vulnerable where they are. One pastor told me, “Many in the Assyrian and Chaldean leadership talk as though they are spokesmen for all Christians. They are not.” Another said, “Personally I want Christians everywhere, on equal footing with all Iraqis, not with special treatment in a special area.”

What’s becoming clear, as I finish out my time in Iraq, is that putting this war-depleted country on solid footing will depend in many ways on Iraqi minorities who have seldom had a voice in the past.

1. What do you learn about Hamdaniyah from this article?

2. a) Who staged protests in Hamdaniyah last week?
b) Why did they protest?

4. What would a census most likely show about Ninevah? Why?

5. a) Define autonomy.
b) Why does Hamdaniyah Mayor Nissan Karumi say the Assyrians are entitled to autonomy?

6. How did Iraqi Prime Minister Nouri al-Maliki respond to the protests?

7. a) Who opposes a Christian autonomous region in Nineveh?
b) Why do they oppose this plan?

8. Do you think an autonomous region for Christians in Nineveh should be established? Explain your answer.

ON ASSYRIANS AND CHALDEANS:

For a map of the province of Nineveh, go to wikimedia.org.

For background information on Nineveh, go to wikipedia.org.

Iraq is divided into 18 provinces. For a map of Iraq’s 18 provinces, go to the Multi National Force website at mnf-iraq.com.

Read more about the Assyrians at Nineveh.com.