Canada: Don’t count on us for refuge 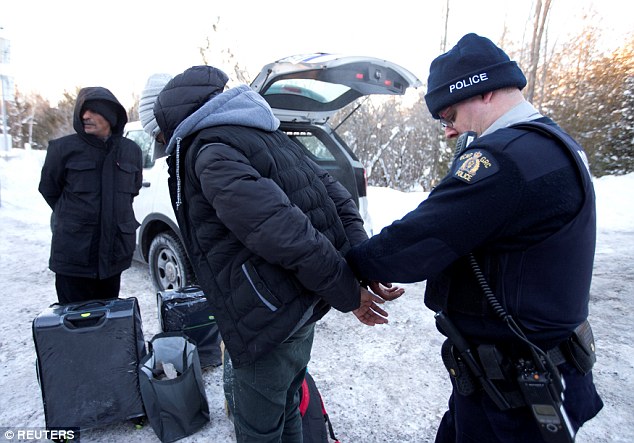 Migrants from Yemen taken into custody by the Royal Canadian Mounted Police after walking across the border into Hemmingford, Quebec in February 2017.

(by By Sara Schaefer Muñoz in Toronto and Alicia A. Caldwell in Los Angeles, The Wall Street Journal) – Canada has an urgent message for immigrants [who do not have permanent legal status] in the U.S. and are fearing deportation: Don’t count on us for refuge.

Earlier [last] month in Los Angeles, a top lawmaker with Canada’s governing party met with members of the local Hispanic immigrant community to stress that people who fear losing their protected status* in the U.S. shouldn’t expect automatic reception in Canada—and could be deported to their country of origin if they make the trip north.

“It’s really important before making any decisions that they understand [Canadian] laws,” Pablo Rodriguez, a Liberal member of parliament from Quebec, told the group.

That message marks a shift for Canada, which has emphasized its friendliness toward illegal immigrants as the Trump administration has moved to tighten U.S. borders. When the U.S. launched its ban on travelers from a few Muslim-majority countries in January, Canadian Prime Minister Justin Trudeau posted a message on his Twitter account: “To those fleeing persecution, terror & war, Canadians will welcome you, regardless of your faith. Diversity is our strength.” Since mid-July, however, Canada has faced an…influx from the U.S. of some 7,000 asylum seekers, in large part Haitians who feared deportation once their U.S. temporary protected status* expires. Many of them were among the estimated 58,000 in the U.S. under a humanitarian program that allowed them to stay as the Caribbean island rebuilt after a devastating earthquake in 2010. The Trump administration has signaled it won’t renew the [status] once a six-month extension runs out in January.

Now Ottawa is rushing to clarify its own rules: namely, that those who arrive in Canada can be deported back to their country of origin, not just returned to the U.S. Furthermore, if they have been denied asylum in the U.S., they are unlikely to receive it in Canada.

“We remain unwavering in our commitment to offer protection for those determined to flee war, persecution or terror,” Ahmed Hussen, Canada’s Minister of Immigration, Refugees and Citizenship, said in an interview earlier this month. “But there is a lot of false information in those communities. Not having or losing status in the U.S. is not grounds for an asylum claim.”

Because of a treaty between Canada and the U.S., asylum seekers need to make their claims in whichever country they arrive first. [However], if they enter Canada illegally, [they are exempt from the treaty], which is why thousands made their way over back roads and through wooded areas along the New York-Quebec border in the summer. Canadian officials had to convert Montreal’s stadium to a shelter to handle the influx, which put immigration and police resources under stress and set off clashes between pro and anti-immigration demonstrators.

To discourage such crossings…Canadian officials are reaching out in the U.S. They are also posting messages on Canadian immigration websites, such as, “Claiming Asylum: No Automatic Stay in Canada.” …

“There is no pass for those who cross [illegally],” Emmanuel Dubourg, a Haitian-Canadian member of parliament, emphasized during visits last month to Miami’s Haitian community.

Prime Minister Trudeau was asked at a recent press conference if his January tweet had been too welcoming. “We welcome refugees in this country, but there is process to determine whether someone is a refugee,” he said, adding that those fleeing to Canada face rigorous screening.

Among Haitians’ refugee-protection claims finalized in the first six months of this year, about half were accepted, according to Canadian immigration statistics. Of 10,330 refugee claims completed from all countries in that period, 65% were accepted. …

For Canada, the U.S. has always served as a buffer against the northward flow of illegal migrants. But now [that President Trump is enforcing immigration laws] it is unexpectedly facing significant illegal immigration along many parts of its 4,000-mile southern border with the U.S., though far less than the U.S. experiences along its Mexican border. The outreach efforts of Canadian officials mirror those the U.S. government has undertaken in Central America in recent years, where officials have warned families there is no free pass into the U.S. (despite the fact that the Obama administration allowed all children and families to stay, which then encouraged more to come.)

In Los Angeles earlier [last] month, community leaders listening to Mr. Rodriguez told him it could be hard to dissuade worried Central Americans in the U.S. from trying their luck in Canada. Many in those communities have been protected not only under the Dreamers program but through temporary status granted after Hurricane Mitch plowed through Central America in 1999 and deadly earthquakes hit El Salvador in 2001.

Protected status* for citizens of Central American countries, covering more than 250,000 people, are also set to expire next year.

Salvador Sanabria, executive director of Salvadoran advocacy group El Rescate, advised the Canadian officials to step up their campaign to clarify the country’s stance, “given the fact that you might be facing a potential humanitarian crisis at your border.”

*Temporary protected status (TPS) is a temporary immigration status to the U.S., granted to eligible nationals of designated countries. … During the period for which a country has been designated for TPS, TPS beneficiaries may remain in the U.S. and may obtain work authorization.  People from various countries who are temporarily unable to safely return to their home country because of ongoing armed conflict, an environmental disaster, or other extraordinary and temporary conditions are given temporary protected status. (per wikipedia)

From The Wall Street Journal. Reprinted here for educational purposes only. May not be reproduced on other websites without permission from the WSJ.

1. List the following information for Canada: (see the CIA World FactBook website for answers)
a) capital:
b) location/the countries that share its borders:
c) the religious breakdown of the population:
d) the type of government:
e) the chief of state (and head of government if different):
f) the population:

2. Define the following as used in the article:

3. a) What did Pablo Rodriguez, a Liberal member of the Canadian parliament tell representatives of the Hispanic immigrant community in Los Angeles earlier this month?
b) What did Emmanuel Dubourg, a Haitian-Canadian member of parliament, emphasize during visits last month to Miami’s Haitian community?
c) How do these messages differ from the message proclaimed by Canadian Prime Minister Justin Trudeau earlier this year?

4. a) What was the result of Prime Minster Trudeau’s public proclamation (tweet)?
b) When asked at a recent press conference if his January tweet had been “too welcoming,” what was Prime Minister Trudeau’s response?
c) What do you think of his reply? (Should he have taken responsibility for his mixed messages?)

5. Why doesn’t Canada face the same problem with massive flows of illegal immigrants experienced by the U.S. and European countries?

6. The Trump administration is ending the temporary protected status for Haitians who were granted it following the earthquake 8 years ago while their nation rebuilt. (Former President Bill Clinton co-chaired the recovery organization and Hillary Clinton was U.S. Secretary of State during that time.) The protected status is temporary. How many of the Haitians who applied for asylum in Canada were denied refugee-protection and must return to Haiti?

7. Prime Minister Trudeau is viewed as welcoming and compassionate, but unfortunately gave many people false hope with his tweet.
President Trump is accused of hating immigrants, being “anti-immigrant” etc. because he is enforcing immigration laws and only welcoming immigrants who come to the U.S. legally.
In his address to the U.N. General Assembly on September 19th, President Trump said to the gathered world leaders, “As President of the United States, I will always put America first, just like you, as the leaders of your countries will always, and should always, put your countries first. All responsible leaders have an obligation to serve their own citizens, and the nation-state remains the best vehicle for elevating the human condition.”
Do you think that leaders have a responsibility to put their own citizens ahead of those from another country? Explain your answer.

CHALLENGE FOR YOUR TEACHER: Ask your teacher to explain why Prime Minister Trudeau should have considered the example of German Chancellor Angela Merkel’s similar proclamation in Germany in 2015 before making such a declaration.