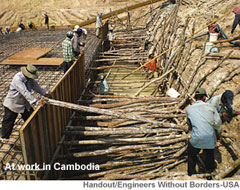 (by Mark Bergin, WorldMag.com) – Agou Avedje, a 600-person village in the western African country of Togo, is indicative of many small communities in undeveloped parts of the world. Disease and malnutrition are endemic due to lack of sanitation and limited access to clean water.

Tragically, such problems are not primarily for lack of financial or material resources, but for lack of knowledge. The solution: simple engineering ingenuity.

The Denver Professionals Chapter of the international relief organization Engineers Without Borders (EWB) began providing such answers of design last year. A team of engineers helped the village construct a public latrine, one that uses ash from the villagers’ cooking fires to block odor and speed composting. Next, the Denver chapter aims to develop systems for collecting drinking water in a community now reliant on contaminated wells and inconsistent rivers several miles away.

But this is no classic charity case. EWB simply offers plans and education; the people of Agou Avedje make the executive decisions, provide the manpower, and even contribute financially. Denver team lead Chris Fahlin says that process of community involvement greatly increases the likelihood of a project’s success: “It is possible that they can pay for these things themselves. When they do, they take ownership of it. They take responsibility for it. It’s theirs.”

That concept of local ownership permeates every aspect of the EWB mission. Volunteers present themselves not as rich Americans riding to the rescue of helpless people, but rather trained engineers passing along knowledge to capable communities.

EWB founder Bernard Amadei, a geotechnical engineer who went from designing large-scale dams and tunnels to simple rain-catching systems eight years ago, built the value of sustainability into his organization from its inception. “Engineers Without Borders is not charity,” Amadei said during the organization’s annual conference last month in Seattle. “I’m against charity. Engineers Without Borders is partnership. Take what people know and help them do it better.”

That EWB is volunteer-based and without massive endowments helps ensure its partnership strategy remains consistent. The community-by-community, village-by-village approach likewise prevents the kind of waste often generated in one-size-fits-all solutions. For larger relief agencies, such as the Bill & Melinda Gates Foundation, the propensity to miss specific local needs is far greater (see sidebar).

High-efficiency cooking stoves in Rawanda are preserving wood and limiting smoke inhalation. A replicable irrigation system in Cambodia is extending farming seasons and increasing crop yields. A spring protection box and pipeline in Honduras are supplementing the meager water supply of a trickling stream for a 46-home village.

More than 11,000 members within 271 chapters of EWB are at work on such projects, which typically range in cost between $15,000 and $35,000, according to executive director Cathy Leslie. That high impact-to-cost ratio and the immediacy of benefits to undeveloped communities appeals to the heart of what attracts many engineers to their field-namely, smart and efficient problem-solving. “We have a desire to change the world, not in 100 years, but right now,” Leslie said.

In many ways, EWB is a model for effective compassion-private citizens taking initiative independent of government support. But the organization’s leadership is beholden to a humanistic worldview, believing that that the removal of felt needs can clear a path to world peace.

EWB chapters in Israel and Palestinian-controlled areas have recently begun working together in hopes of modeling peace and cooperation in their region. But the significance of that partnership lessened given that both are run by Western-educated professionals.

In his speech to EWB members, Amadei showed pictures of smiling children in communities aided by EWB efforts. “All of us are called to bring smiles to faces,” he said. “Believe me, if you can bring smiles like this to a refugee camp in Palestine, they won’t need AK-47s. That’s the picture. That’s what Engineers Without Borders is all about.”

The idea that clean water and decent public latrines will bring peace in the Middle East is hard to fathom. Amadei speaks of the immorality of poverty, hunger, and disease as though these problems instigate human sin rather than reflect it.

Copyright ©2008 WORLD Magazine, May 3, 2008 issue.  Reprinted here May 6th with permission from World Magazine. Visit the website at www.WorldMag.com.

1. As in many small villages in undeveloped parts of the world, what has been a major problem in the village of Agou Avedje in Togo?

2. Why do so many villages in undeveloped parts of the world have this problem?

3. What is Engineers Without Borders (EWB)?

4. a) How does EWB work with a village to solve a problem?
b) When are EWB projects most successful, according to team lead Chris Fahlin?

5. What is the mission of EWB?

6. List some of the other projects EWB volunteers have worked on.

7. EWB founder Bernard Amadei believes that that the removal of felt needs can clear a path to world peace. EWB chapters in Israel and Palestinian-controlled areas have recently begun working together in hopes of modeling peace and cooperation in their region. In his speech to EWB members, Mr. Amadei showed pictures of smiling children in communities aided by EWB efforts. “All of us are called to bring smiles to faces,” he said. “Believe me, if you can bring smiles like this to a refugee camp in Palestine, they won’t need AK-47s. That’s the picture. That’s what Engineers Without Borders is all about.” (from paragraphs 11-13)
a) Do you agree with Mr. Amadei’s belief? Explain your answer.
b) What do you think of EWB’s idea of helping people better their lives by taking ownership of the projects themselves?