Posted on January 30, 2019 in Wednesday's Example of Media Bias 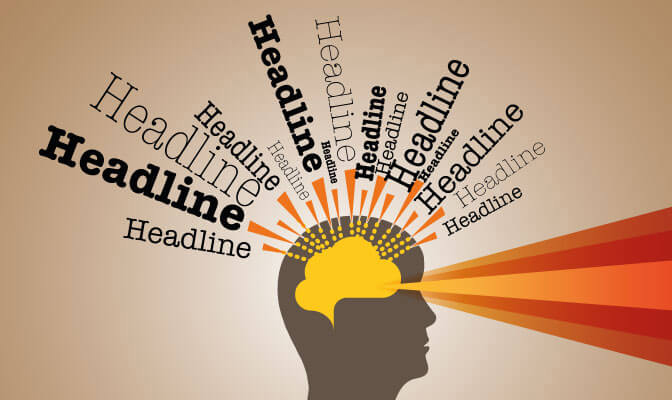 …An April, 2016 academic study of bit.ly links to BBC, CNN, Fox News, New York Times and Huffington Post articles shared on Twitter found that 59 percent of the links were never clicked. And [a Reuters] study of push-through news alerts to mobile phones found that “People click on the alert about half the time.”

So for many casual readers who don’t closely follow the [news], all they know about the [news] is from the headlines and alerts of articles they don’t read.

This Columbia Journalism Review observation about the mobile alerts would also apply to headlines:

But push notifications are not news stories. They are snippets often written on deadline, akin to headlines that deliver the jist [sic] of a complicated event but little more.

Yet there’s growing anecdotal evidence to suggest that readers may view news alerts as standalone stories, taking them at face value without clicking through to read more.

But headlines’ effects don’t end there.

Headlines actually impact the way we read and remember articles.

Responding to a 2014 study…on the effects of misinformation in headlines, Maria Konnikova wrote in The New Yorker:

Psychologists have long known that first impressions really do matter—what we see, hear, feel, or experience in our first encounter with something colors how we process the rest of it. Articles are no exception.

And just as people can manage the impression that they make through their choice of attire, so, too, can the crafting of the headline subtly shift the perception of the text that follows.

By drawing attention to certain details or facts, a headline can affect what existing knowledge is activated in your head.

By its choice of phrasing, a headline can influence your mindset as you read so that you later recall details that coincide with what you were expecting.

In terms of objective journalistic standards, bad headlines can violate one or more of the Eight Categories of Media Bias. The following four examples relate to the Israeli-Palestinian conflict, but the principles apply to headlines of all areas of coverage.

1. In one day, Palestinians stabbed Israelis in three separate attacks. A New York Times headline (which was subsequently changed) demonstrated a lack of context so bad, it actually created a moral equivalence between the terrorists and their victims.

2. This UK Daily Mail headline (subsequently changed) is an example of distortion of facts. You have to read the article to learn that Mohamed Fakih was killed in a shootout he instigated along with cohorts from his Hamas cell.

4. Not wanting to use the word “terror” in a headline, the New York Times resorted to some stunning lexical gymnastics to explain Palestinian youths stabbing Israelis — a violation of misleading terminology.

Having an awareness of why headlines matter and what constitutes headline bias can make us savvier media consumers whether we get our news off web sites, social feeds, or print editions. …

Excerpted from a report by Pesach Benson, HonestReporting.com, Dec. 26, 2016

NOTE:  In the report above, Mr. Benson writes:  “In terms of objective journalistic standards, bad headlines can violate one or more of the Eight Categories of Media Bias. [My…examples] relate to the Israeli-Palestinian conflict, but the principles apply to headlines of all areas of coverage.”

1. Why is it important for news organizations to provide accurate headlines?

2. What responsibility do you think publishers/editors have to provide accurate headlines that are not misleading?

3. Having read this post, what responsibility do you think you as the reader have to read the news with discernment?

Pay attention to news reports about the Israeli-Palestinian conflict.  Are events reported accurately?

3. Having read this post, what responsibility do you think you as the reader have to read the news with discernment?
Read the whole article and not just the headline/caption/1st paragraph. Also, read multiple news stories on the same event. It will give a more accurate picture of what actually occurred.