Posted on November 30, 2016 in Wednesday's Example of Media Bias 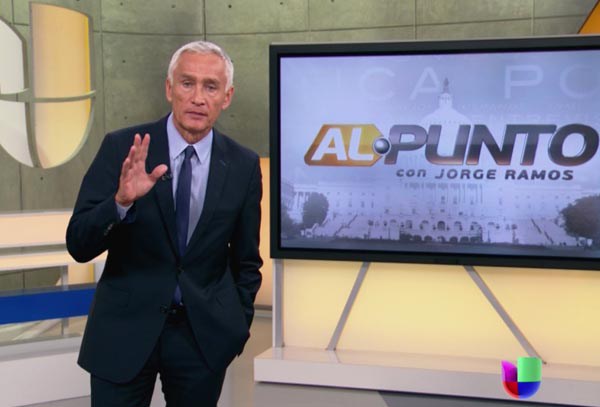 From a Nov. 28 post by Jorge Bonilla at Newsbusters:
It took Univision anchor Jorge Ramos all of three seconds to set the tone of the post-Fidel Castro edition of his weekly public affairs show, Al Punto. With one single sentence, Ramos put the rest of the establishment media to shame. He said:

The dictator, Fidel Castro, is dead. It took us 57 years to be able to say this phrase. And with the death of the historic leader of the Cuban revolution, are opened many possibilities for the future of the island.

The latest edition of Univision’s Al Punto dealt with Fidel Castro’s passing very differently than the rest of the establishment media, which has collectively decided to whitewash the brutalities that the Castro regime has inflicted on Cuba over the past 57 years. There was no justification of human rights abuses here, and no mentions of nuance when addressing Castro’s history. The entire show was devoted to the calling of Castro by his proper names. Dictator. Tyrant. Murderer.

The next segment featured veteran journalist Ninoska Perez, along with activist Ofelia Acevedo, the widow of dissident Oswaldo Payá, who died in 2012 under suspicious (and likely regime-induced) circumstances. Both women refuse to remain silent in the face of barbarism, and were very compelling to watch.

That very powerful segment was followed by an interview with RNC Director of Hispanic Media Helen Aguirre-Ferré. This is probably the only segment where Ramos veered slightly off of Cuba and on to immigration, but not for long and with a very light touch.

In keeping with the show’s tradition of joining politics with entertainment, Ramos then discussed Fidel with legendary producer Emilio Estefan.

Ramos closed out the show with replays of his 2014 interview with Fidel’s bodyguard, and of the time in the early ’90s when he himself was roughed up by Castro’s goons in Mexico.

…Jorge Ramos broke sharply from the rest of the media by simply calling a dictator a dictator. The tone of the show was proper in that it was somber. Viewers got to see the reality of Fidel Castro through the voices of people whose lives were affected by the tyrant, and were given space to come to their own conclusions.

This isn’t to say Univision uniformly took this approach to Castro’s demise on all its platforms. Online, they rehashed the disgusting Fidel-at-90 hagiographical slideshow, so there’s that.

[Hopefully] the network will subtitle Sunday’s Al Punto show into English and post it prominently…if for no other reason than to show the rest of the media how to properly cover Fidel Castro. This was the one show on the subject that was must-must-watch.

1. In his post, Bonilla wrote: “Jorge Ramos broke sharply from the rest of the media by simply calling a dictator a dictator. The tone of the show was proper in that it was somber. Viewers got to see the reality of Fidel Castro through the voices of people whose lives were affected by the tyrant.”

In contrast, on NBC’s Sunday Today show, reporter Andrea Mitchell glowed about the communist leader and shared her memories of him. “[Castro] was …very, very aware of everything that was going on, very, very smart and very wedded to his revolutionary ideology,” Mitchell opined from Havana, Cuba.  Throughout her whole report Mitchell failed to mention the huge celebrations taking place in Little Havana in Miami by Cuban exiles and their families…

Following her report Mitchell reminisced about her past encounters with the late dictator. “We would argue, he would have dinners or meetings or interviews starting at midnight going to 2:00 and 3:00 in the morning so sometimes hard just to keep up with him,” recounted Mitchell, “And he was a voracious reader questioning me about the politics and the economy in the US.”

Why is Ramos’ show on Castro not biased while, in comparison, NBC reporter Andrea Mitchell’s report on Castro is a biased one?

Castro was a brutal dictator, quick to use violence. He ordered the executions of his opponents, locked up political prisoners and violated human rights. He also averted multiparty elections, viciously censored the press and maintained absolute control over every corner of the island. He wasn’t a hero, and we shouldn’t present him as one now that he’s dead.

For years, I asked Latin American leaders if they considered Castro a dictator. Very few dared to admit it on the record. They feared and respected him and admired how he stood up to the United States for so long. Only in private would they denounce Cuba’s lack of liberty.

Now that Castro is gone, I’d rather talk not about him but about his millions of victims.

As a journalist, Jorge Ramos reports the news from a liberal perspective, supporting the liberal point of view on immigration and other issues. However, he breaks from the media’s narrative on Castro and portays him as he really was. What obligation do other news organizations and journalists have to do so as well? (Especially considering younger people who don’t know firsthand about the abuses committed by the Communist dictator Castro.)

Watch the first 15 seconds of the show, which has been translated into English:

Watch the full video (English translation has not yet been provided):

1. Ramos is giving a factual report on who Castro was; Andrea Mitchell is giving an idealized version of how she saw Castro. Her report establishes a romanticized picture of Castro, which gives viewers a false impression of who he was.