Posted on February 26, 2020 in Wednesday's Example of Media Bias 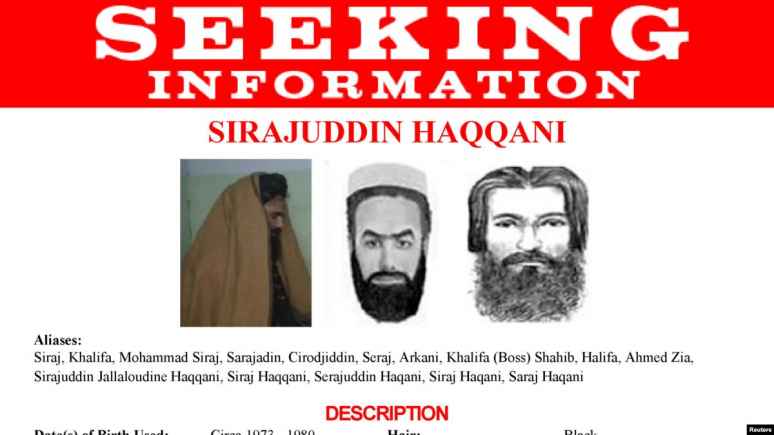 On Thursday, the New York Times…published an opinion piece by Sirajuddin Haqqani under the headline, “What We, the Taliban, Want.”

Haqqani, whom the Times identified as “the deputy leader of the Taliban,” is far more than that, according to the FBI.

The bureau designated Haqqani, leader of the Haqqani Network, a “specially designated global terrorist” and is offering $5 million for information leading directly to his arrest.

“Sirajuddin Haqqani is wanted for questioning in connection with the January 2008 attack on a hotel in Kabul, Afghanistan, that killed six people, including an American citizen,” the bureau says on its website. “He is believed to have coordinated and participated in cross-border attacks against United States and coalition forces in Afghanistan. Haqqani also allegedly was involved in the planning of the assassination attempt on Afghan President Hamid Karzai in 2008.”

In addition to the FBI’s reward, the U.S. State Department is offering a $10 million reward to bring Haqqani to justice — something the Times’ readers were not informed of.

The op-ed sparked outrage from Afghan military leaders and others who have experience with the Taliban and even included Mujib Mashal, the Times’ senior correspondent in Afghanistan, who tweeted,

“The piece by Siraj Haqqani in @nytopinion — which’s independent of our news operations & judgment — omits the most fundamental fact – that Siraj is no Taliban peace-maker as he paints himself, that he’s behind some of most ruthless attacks of this war with many civilian lives lost.”

Some of the criticism of the op-ed stemmed from the Times not explaining the Haqqani family’s role in the Taliban or the author (Sirajuddin Haqqani’s) involvement in deadly military strikes that have killed Afghan citizens and American soldiers. Sirajuddin Haqqani commanded a guerrilla force of at least 5,000 fighters in Afghanistan, The Washington Post’s Haq Nawaz Khan and Pamela Constable reported in 2017. He is a leader of the Haqqani network, established by his father and feared for particularly brutal attacks.

“The Haqqani and Taliban are responsible for the death of dozens of American soldiers and atrocities against Afghan civilians,” added Rep. Michael Waltz (R-Fla.) in a tweet Thursday. “@nytimes should be ashamed of itself for enabling this blatant propaganda from a designated global terrorist, all in the name of ‘diverse reviews.'”

Midway through the story, the op-ed offered a link for readers to learn “more on the Haqqani network,” which directed to a 2016 news story that said the militant group was leading a “deadlier Taliban in Afghanistan.”

The Times defended the decision to publish the piece. “We know firsthand how dangerous and destructive the Taliban is,” Times spokesperson Eileen Murphy said in a statement emailed to The Washington Post. “But, our mission at Times Opinion is to tackle big ideas from a range of newsworthy viewpoints. We’ve actively solicited voices from all sides of the Afghanistan conflict, the government, the Taliban and from citizens. Sirajuddin Haqqani is the second-in-command of the Taliban at a time when its negotiators are hammering out an agreement with American officials in Doha that could result in American troops leaving Afghanistan. That makes his perspective relevant at this particular moment.”

…Still, many observers found a link insufficient context for readers evaluating Haqqani’s opinion while some objected to affording him space with or without context.

“Sirajuddin Haqqani is a notorious war crimes suspect being investigated by the International Criminal Court,” Andrew Stroehlein, the European media director for the Human Rights Watch, wrote on Twitter. “Why does the New York Times give him op-ed space?”

Retired four-star Marine Corps Gen. John R. Allen, who commanded troops in Afghanistan during the Obama administration and is now president of the Brookings Institution, told the Daily Beast the decision to publish the op-ed raised questions about judgment in the Times newsroom.

“Giving the Haqqani terror network the platform of the NYT for the expression of their views on the so-called peace plan creates a strategic communications coup,” he told the publication.

1.  Apart from including a related link to a 2016 story about the Haqqani Network, the New York Times failed to inform its readers that Haqqani is a wanted terrorist with a $5 million reward for information leading to his arrest.   What type of bias does the Times’ intentional lack of information about the true identity of the opinion writer display?

2. Andrew Stroehlein, the European media director for Human Rights Watch, tweeted “Sirajuddin Haqqani is a notorious war crimes suspect being investigated by the International Criminal Court. Why does the New York Times give him op-ed space?” Do you agree with Human Rights Watch in questioning the legitimacy of publishing an op-ed by Haqqani? Explain your answer.

3. When questioned about its decision to leave out the fact that Haqqani is a wanted terrorist, the New York Times wrote: “Sirajuddin Haqqani is the second-in-command of the Taliban at a time when its negotiators are hammering out an agreement with American officials in Doha that could result in American troops leaving Afghanistan. That makes his perspective relevant at this particular moment.” Does the editors’ explanation make you more or less likely to trust the Times’ reporting in general? Explain your answer.