Posted on April 26, 2017 in Wednesday's Example of Media Bias 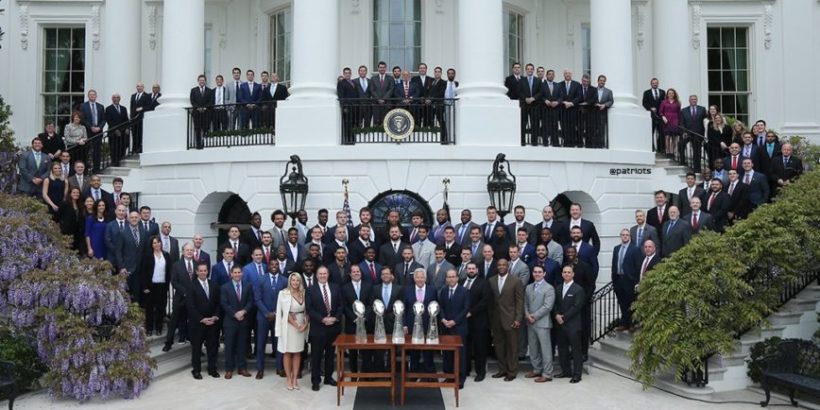 From two posts by Don Irvine at AIM.org:
The New England Patriots blasted The New York Times for tweeting what they said were misleading photos of the team’s visit to the White House last week, in an effort to make it appear that a large swath of the players and staff were boycotting the event in protest of President Donald Trump. The Patriots [said] the photos aren’t comparable because the staff was seated on the South Lawn this year, not standing with the team as they did in 2015:

To drive the point home further, the Patriots also tweeted a photo of the team with President George W. Bush in 2004—the last time they won two Super Bowls in three years: It’s not uncommon these days for players to skip or boycott the White House trip for personal or political reasons, but the Times’ effort to make it appear that there was a massive boycott of President Trump by the team, when they knew it wasn’t true, shows that the Times prefers fake news over the truth.

“The day after the Patriots pointed out the Times’ bias, sports editor John Stallman took responsibility in an email to The Washington Post:

Bad tweet by me. Terrible tweet. I wish I could say it’s complicated, but no, this one is pretty straightforward: I’m an idiot. It was my idea, it was my execution, it was my blunder. I made a decision in about four minutes that clearly warranted much more time.

If Stallman hadn’t been in such a rush to make a political statement out of the Patriots visit, he could have avoided the embarrassment to both himself and the Times.”

Why do you think the Times’ editor was trying so hard to point out what he sees as disdain for President Trump?

3. Do you think Times editor Stallman would have issued this type of retraction if the Patriots had not called him out? Explain your answer.