Posted on November 6, 2019 in Wednesday's Example of Media Bias 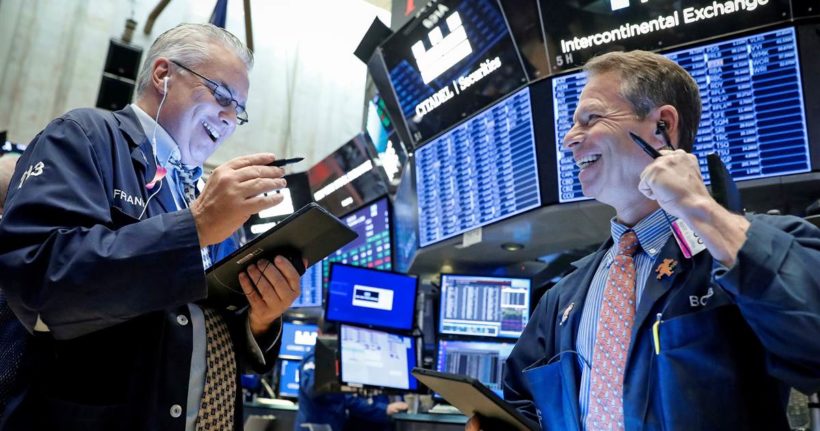 Reporter Amrith Ramkumar noted the market hit 27,462, a gain of 0.4 percent for the day.

“The rally brought its 2019 advance to 18% in what has been a banner year on Wall Street.”

ABC, CBS, and NBC on Monday night? Nothing.

NPR had no segment on its news show All Things Considered.

There was also no sign of this good news on the ABC, CBS, and NBC morning “news” programs. …

The PBS NewsHour had 37 words from anchor Amna Nawaz:

The papers weren’t much better:

The Washington Post printed a story by its own reporter, Taylor Telford, who quoted economist Chris Rupkey of MUFG Union Bank: “There is no recession out there on the horizon….The stock market can rejoice and continue to climb to new record highs.”

[In contrast to the networks and media outlets, cable news network CNBC, which focuses on business and financial news, reported the record breaking economic news on its website with the headline:

The article began, “The Dow Jones Industrial Average reached a milestone on Monday, joining the S&P 500 and Nasdaq Composite at record levels…”

and toward the end of the article:

Friday’s jobs report also showed the U.S. labor force expanding by 325,000 last month. Meanwhile, those counted as being outside of the workforce dropped by 118,000 to 95.5 million.

“More people are being drawn back into the labor force. That, to me, is the key point,” said Brent Schutte, chief investment strategist for Northwestern Mutual Wealth Management. “From a fundamental economic, business-cycle perspective, there is no reason to have a recession right now. Unless there is a policy mistake or miscalculation.”

“I can recall very few times in my career where one economic report really changed the mood music so much on Wall Street as the jobs report did,” he said.

Meanwhile, the corporate earnings season has largely been better than expected.  Seventy-five percent of the S&P 500 companies that have reported have surpassed analyst expectations, FactSet data shows.].

That sounds like a story worth reporting on TV, doesn’t it?

(from a November 5 Newsbusters report by Tim Graham)

1. What type of media bias is highlighted in the excerpt above?

2. Why should the networks have reported this news? Why is the Dow’s record high newsworthy?

3. Why do you think the networks (and other media) would not want to report on the record-breaking good economic news?

1. The excerpt illustrates bias by story selection and omission.

2. The state of the economy is newsworthy. The networks should have reported on it because the topic affects everyone. If you read/watch news reports on the job President Trump is doing, stories imply that he is not successful.  However, this jobs report is fantastic news for all Americans.  The media’s job is to report the whole story, not just the narrative they want it to be. The networks have a responsibility to inform viewers of important events.

3. Opinion question. Answers vary.
One possible answer: Opinions vary on how much a president’s policies and actions affect the economy. However, the average person does view the president as at least somewhat responsible for the state of the economy. With few exceptions, the media is actively opposed to President Trump. Reporting on continued record breaking economic news under Trump’s leadership might cause voters to view him favorably.