Posted on November 8, 2017 in Wednesday's Example of Media Bias 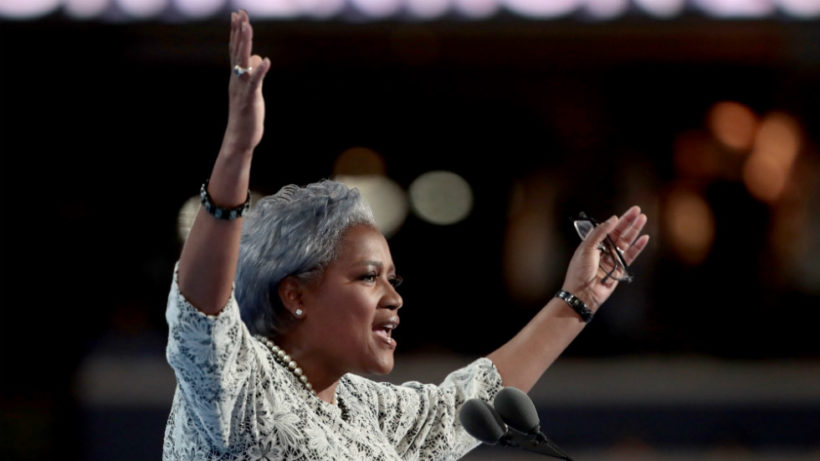 Donna Brazile speaking at DNC in 2016.

From a report by Joe Concha at TheHill.com on Nov. 3:
The broadcast evening newscasts on three major networks on Thursday didn’t mention bombshell revelations by former Democratic National Committee interim Chairwoman Donna Brazile, who is a longtime Clinton ally, [that her predecessor, Debbie Wasserman Schultz, had helped Hillary Clinton rig the 2016 Democratic primary in her favor.]

Brazile has written in a new book that she discovered evidence that she said showed Hillary Clinton’s campaign “rigged” the Democratic presidential primary.

“ABC’s World News Tonight,” “NBC Nightly News” and “CBS Evening News” all didn’t report the allegations by Brazile on Thursday evening despite it receiving considerable coverage on cable news and in print and online media. Brazile was also trending as one of Twitter’s top topics on Thursday.

In excerpts released to Politico Thursday, Brazile writes in her new book, “Hacks: The Inside Story of the Break-ins and Breakdowns that Put Donald Trump in the White House,” that it “broke [her] heart” upon discovering evidence that she said showed the Clinton campaign “rigged” the Democratic nomination system.

[In an excerpt of her upcoming book…she disclosed the details of a fundraising agreement between the DNC and the Clinton campaign reached in August 2015. The previously secret agreement appeared to confirm some of Bernie Sanders supporters’ fears about the 2016 Democratic primary – that is was rigged against him in favor of Clinton].

“By September 7, the day I called Bernie, I had found my proof and it broke my heart,” Brazile wrote about a Sept. 7, 2016, call to Sen. Bernie Sanders (I-Vt.), who gave Clinton a far more serious challenge for the nomination than many had expected.

She wrote the arrangement was [agreed to] in an effort to address the mounting debt of the Democratic party in the aftermath of President Obama’s successful 2012 reelection campaign.

“The [Clinton] campaign had the DNC on life support, giving it money every month to meet its basic expenses, while the campaign was using the party as a fund-raising clearing house,” Brazile wrote.

“If the fight had been fair, one campaign would not have control of the party before the voters had decided which one they wanted to lead. This was not a criminal act, but as I saw it, it compromised the party’s integrity,” Brazile added.

…Despite the Brazile blackout, the ABC, NBC and CBS evening newscasts all featured reports on special counsel Robert Mueller’s investigation into Russian meddling in the 2016 presidential election and the recent indictments of Trump campaign chairman Paul Manafort and his business associate, Richard Gates.

1. What type of bias do NBC, ABC and CBS display in not reporting the astonishing allegations made by longtime Clinton ally and DNC chair Donna Brazile?

2. Mr. Concha concludes his article by writing: “Despite the Brazile blackout, the ABC, NBC and CBS evening newscasts all featured reports on special counsel Robert Mueller’s investigation into Russian meddling in the 2016 presidential election…” Why do you think they all chose to report on the one story over the other? Explain your answer.