Posted on February 1, 2017 in Wednesday's Example of Media Bias 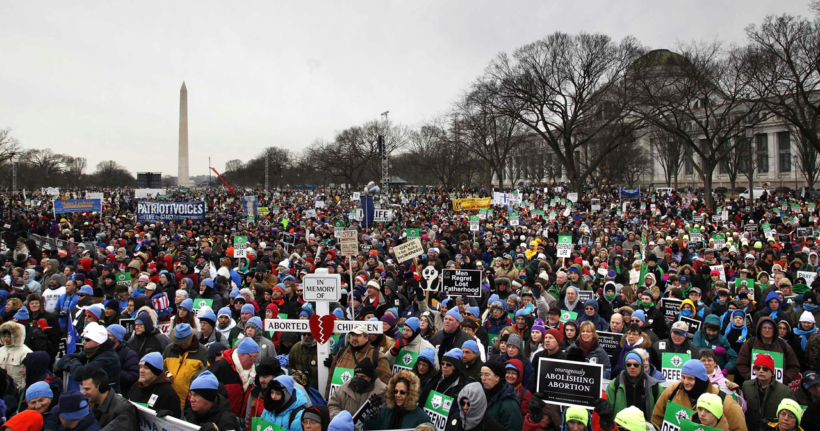 In past years, the major networks have barely mentioned the annual March for Life, which is held in Washington D.C. each January.  [The March for Life first occurred after 1973’s Roe v. Wade Supreme Court decision legalizing abortion.]

From 2013 to 2016, the networks devoted just 78 seconds to the annual pro-life March for Life held every year in January in Washington D.C.:

While the networks barely mentioned the 2016 March for Life, 2017 was different:

ABC, CBS and NBC spent more than 20 minutes on the march.

The difference? President Trump, according to the networks themselves.

During their morning and evening news shows, the three broadcast networks dedicated:

Note that the networks spent:

To put that in perspective, the networks spent almost 23 minutes on the anti-Trump women’s march – before it even happened. But their nearly 22-minute coverage of the 2017 March for Life was still an improvement.

ABC was the only network to mention the 2016 March for Life – for a total of 35 seconds.  ABC, CBS and NBC combined covered the 2017 March for Life 37 times more than the 2016 March for Life. And the theme that united every news report was President Donald Trump, whether in regards to his impending Supreme Court justice pick and his pro-life policies or the new administration (including his vice president Mike Pence).

This year’s March for Life boasted Vice President Mike Pence and White House counselor Kellyanne Conway as speakers. The largest annual march in Washington, D.C., the March for Life laments abortion and celebrates human life around the anniversary of the Supreme Court’s 1973 Roe v. Wade decision. It was the first time a vice president ever spoke at the march. And while the president didn’t attend, he tweeted his support and challenged the press – in an interview with ABC anchor David Muir – to cover the march.

When Muir asked him about the women’s march in a recent interview, Trump turned the conversation to the March for Life. “The crowds were large, but you will have a large crowd on Friday, too, which is mostly pro-life people,” he said. “Some people said it will be larger. Pro-life people and they say the press doesn’t cover them.”

Watch a clip from ABC’s interview with President’s Trump prior to the 2017 March for Life:

1. During his interview with President Trump, ABC’s David Muir asked about the anti-Trump Women’s March. When responding, President Trump mentioned that the press doesn’t cover the pro-life March for Life. Why do you think the media spent so much more time covering this year’s pro-life march (which was held a few days after the interview)?  Was it because President Trump called them out on it? Explain your answer.

3. Fifty-three percent of Americans are Protestants, 22 percent are Catholics. The Catholic church is pro-life and opposes all forms of abortion. Many Protestants, Jews and Muslims are also pro-life. Why do you think the media generally ignores the annual March for Life? Explain your answer.