Navy SEALs to be Court-Martialed

Posted on December 9, 2009 in Wednesday's Example of Media Bias

-Read the excerpt below from Brent Bozell's December 1st post at Newsbusters.org.
-Read "Types of Media Bias" in the right column. Then answer the questions.

Last week, Fox News reported a jaw-dropping story about how our War on Terror has now become a war on ourselves. In September a team of Navy SEALs captured terrorist Ahmed Hashim Abed, a man known to the U.S. military as “Objective Amber,” the architect of the vicious and deadly attack on four American contractors in the summer of 2004. These poor men were shot, burned, and then their bodies were desecrated, hung from a bridge over the Euphrates River.

But instead of hailing the SEALs as heroes for bringing this vicious murderer to justice, three of them have been brought up on charges.

When Abed was captured, he was brought to Camp Baharia, a U.S. base two miles outside Fallujah. According to one attorney, Abed was turned over to the Iraqis by mistake and was later returned to U.S. custody. There are differing reports that he was punched in the gut and given a bloody lip.

The SEALs were faced with two options. One, choose an administrative hearing, facing no possibility of jail time or dishonorable discharge, but having their reputations forever tarnished. Two, choose a court-martial which could exonerate them completely or, if convicted, land them behind bars and end their military careers.

They have chosen the latter. So now they must stand trial, to defend themselves. The terrorists must be laughing in disbelief at us, especially when it’s a well-known fact that they inflict injury on themselves (or each other) while in captivity so as to accuse their captors of abuse. If true in this case, the ruse has worked beyond their wildest dreams.

But let us conclude the SEALS punched this man in the act of capturing him. Take a poll and ask how upset the American public would be and that’s when you’d hear the outrage – at the way the SEALs are being treated.

But you won’t hear that outrage because the American people don’t know about this story because, believe it or not, our national media won’t report it.

There is no one except Fox emerging in a Nexis search of TV news transcripts. No ABC, CBS, NBC, MSNBC, or CNN. How can this merit nothing? There is no sign of a story in major newspapers like The New York Times, The Washington Post, USA Today, the Los Angeles Times, even the Associated Press and other wire services. (One exception: Gannett News Service ran an article from the Navy Times, even if it didn’t make USA Today, Gannett’s largest property.)

Time and Newsweek couldn’t find space for it. …..

1.  What type of bias is the national media displaying in the example above?

2.  Why do you think the national media has not reported this story?

3.  This item was originally posted on 12/1/09.  Do an internet search today – how many stories have the NY Times, Washington Post, USA Today, CNN, ABC, NBC and CBS done on the plight of the Navy SEALS? How many has each media outlet done on the Tiger Woods story?  Why do you think this is so?

1.  The excerpt is an example of bias by omission and selection of stories. 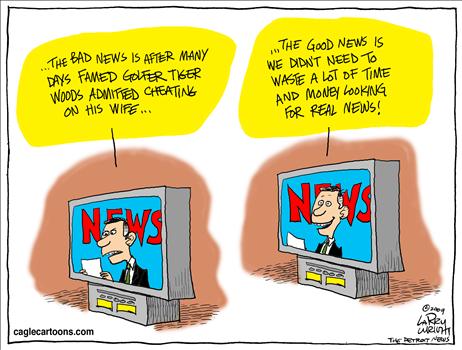