Posted on April 19, 2017 in Wednesday's Example of Media Bias 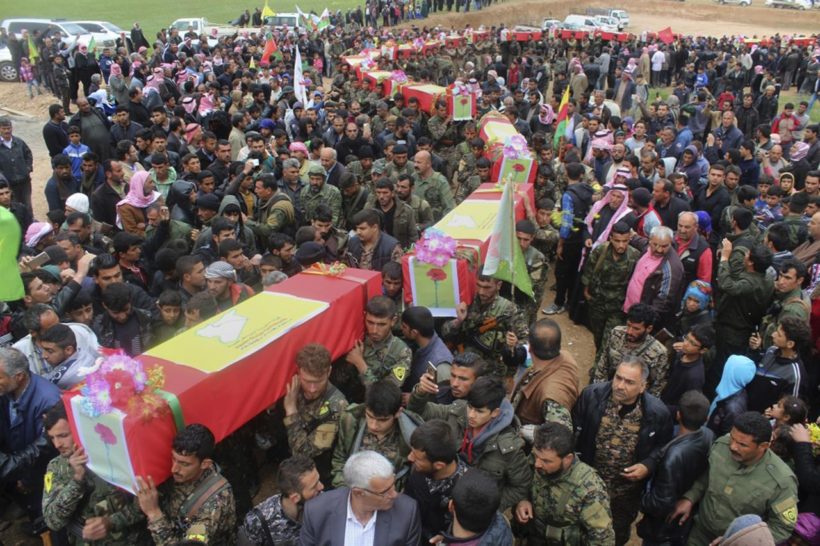 The Wall Street Journal caption : "Fighters from the Syrian Democratic Forces on Thursday carrying the coffins of their comrades killed in a misdirected U.S. airstrike."

Many people only read the headline and the first paragraph of a news story. That is why it is extremely important for media outlets to provide accurate headlines that do not spin a false narrative.

The following is a Wall Street Journal headline in the April 14, 2017 print edition:

The first paragraph of the article reads as follows:

The caption for the photo accompanying the article reads:

“Fighters from the Syrian Democratic Forces on Thursday carrying the coffins of their comrades killed in a misdirected U.S. airstrike.”

This is the full article page: 1. After reading the headline, what do you think happened? — What do you assume about our military’s competence?

2. Does the first paragraph or caption under the photo change your impression of what occurred?

3. Read the 2nd paragraph of the WSJ article:

Members of a Kurdish-Arab coalition allied with the U.S. were killed after providing the U.S. with the wrong coordinates for an enemy target during a battle with Islamic State fighters earlier this week, the military said.

How does this change your understanding about what actually occurred?

4. Why is it important for news organizations to provide accurate headlines?

5. Usually an editor has final say on the headlines.
Consider The Wall Street Journal’s headline, along with the following headlines:

The Washington Post:
Headline: U.S.-led coalition accidentally bombs Syrian allies, killing 18
First paragraph: A U.S. drone struck and killed at least 18 members of an allied Syrian force this week, the Pentagon said, in the worst friendly fire incident of the war against the Islamic State.

a) It is true that on at lease two occasions over the past few years, the U.S. has mistakenly hit our allies with an airstrike in Iraq or Syria. But in this case, our allies mistakenly gave us their own coordinates, calling on us to bomb their own location. What responsibility do you think publishers/editors have to provide accurate headlines that are not misleading?
b) Having read this post, what responsibility do you think you as the reader have to read the news with discernment?

CHALLENGE QUESTION: What would have been a more accurate headline?

1. After reading the headline, what do you think happened? — What do you assume about our military’s competence?
The headline indicates that the U.S. military made a mistake and bombed our allies in Syria. The reader would assume that our military is incompetent.

2. Does the first paragraph or caption under the photo change your impression of what occurred?
Opinion question. Answers vary.

4. Why is it important for news organizations to provide accurate headlines?
Headlines can greatly influence readers’ opinions about the news. The importance of an accurate headline is that most people don’t read every word of every article; they often just skim the headlines. Therefore, those who read just a headline are not accurately informed when the headline misrepresents the story.

5. a) What responsibility do you think publishers/editors have to provide accurate headlines that are not misleading?
Publishers/editors should always provide accurate headlines that are not misleading. They should take this responsibility very seriously if they want the public to trust them and not view them as completely biased.
b) Having read this post, what responsibility do you think you as the reader have to read the news with discernment?
Read the whole article and not just the headline/caption/1st paragraph. Also, read multiple news stories on the same event. It will give a more accurate picture of what actually occurred.

CHALLENGE: What would have been a more accurate headline?  One possible headline: U.S. allies target themselves in airstrike

More details about the friendly-fire airstrike that killed 18 of our allies (from washingtonpost.com):

The SDF is a Kurdish-dominated force that has proven to be a key partner for the United States in Syria.

According to a U.S. official with knowledge of the accidental strike, a series of missteps contributed to the misguided strike.

First, an SDF unit operating close to Islamic State lines incorrectly reported its own location to the U.S.-led coalition, the official said. Typically, friendly forces share their locations with the United States in order to keep them safe from foreign air power.

Then, a separate SDF unit, which spotted the first unit from afar, mistakenly reported its fellow SDF fighters to be Islamic State, requesting an air strike on their location. Armed with what American officials believed were coordinates for a legitimate target, the drone then conducted the attack, with deadly results.

When news isn’t worth reporting

Every time you read a news story, you should be thinking “What’s the agenda?”

Iranian journalist: Many Iranians think Soleimani was a war criminal

Western journalists rarely reach out to the many Iranians who oppose the regime including Soliemani.

Judging Time By Its Covers

Time magazine impacts the public debate as it’s featured in other media outlets and seen in grocery stores by millions of Americans.

Sullivan essentially argues the public needs to be convinced that President Trump should be impeached and removed from office.