Posted on May 3, 2017 in Wednesday's Example of Media Bias 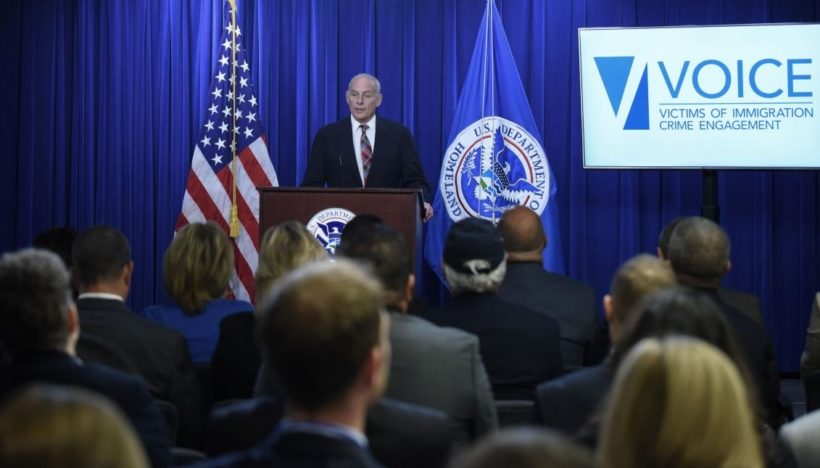 US Secretary of Homeland Security John Kelly announces the creation of the VOICE office during a press conference on April 26, 2017.

Many people only read the headline of a news story. That is why it is extremely important for media outlets to provide accurate headlines that do not spin a false narrative.

The following headlines are from April 26: 1. What do you infer from these headlines? (After reading the headlines, what do you think is the purpose of this new federal government office?)

“The Department of Homeland Security on Wednesday announced the creation of an office to help families that have been the victims of crimes committed by undocumented immigrants, part of an effort by President Trump to aggressively crack down on illegal immigration.”

“In the latest Trump administration effort to spotlight crimes committed by immigrants in the country illegally, the head of Homeland Security on Tuesday launched a new office to help what he said are forgotten victims.”

3. Why is it important for news organizations to provide accurate headlines?

CHALLENGE: What would have been a more accurate headline?

“Stymied on his top immigration initiatives, President Donald Trump is making good on one plan that critics denounce as fearmongering and misleading: opening an office for victims of crimes committed by immigrants, although studies show immigrants are less likely to commit crimes than native-born citizens.”

How does the first paragraph of The Washington Post story differ from those of the New York Times and Los Angeles Times?

1. The reader will incorrectly infer that the Trump administration has created the office to single out crimes committed by all immigrants, rather than the correctly understanding the focus is illegal immigrants who commit crimes.

3. Headlines can greatly influence readers’ opinions about the news. The importance of an accurate headline is that most people don’t read every word of every article; they often just skim the headlines. Therefore, those who read just a headline are not accurately informed when the headline misrepresents the story.

4. a) Publishers/editors should always provide accurate headlines that are not misleading. They should take this responsibility very seriously if they want the public to trust them and not view them as completely biased.
b) Read the whole article and not just the headline/caption/1st paragraph. Also, read multiple news stories on the same event. It will give a more accurate picture of what actually occurred. Also, watch a video of those featured in a news story to hear what they have to say in their own words, as opposed to reading shortened or paraphrased quotes from the person.

CHALLENGE: What would have been a more accurate headline?

5. The NY Times and LA Times first paragraphs both clarify their headlines by explaining that the office is to assist victims of crimes committed by illegal immigrants. The first paragraph of The Washington Post article misleads readers by misrepresenting the purpose of the new federal office.

Watch the April 26, 2017 press conference with DHS Sec. John Kelly as he explains the VOICE office:

Homeland Security Secretary John Kelly issued an immigration memo in March, which creates a “liaison between ICE and the known victims of crimes committed by removable aliens. Often, these victims are not provided adequate information about the offender, the offender’s immigration status, or any enforcement action taken by ICE against the offender. Efforts by ICE to engage these victims have been hampered by prior Department of Homeland Security (DHS) policy extending certain Privacy Act protections to persons other than U.S. citizens and lawful permanent residents, leaving victims feeling marginalized and without a voice,” the memo stated. (Read the DHS memo on establishing the VOICE office)

“All crime is terrible, but these victims are unique — and often too ignored,” Kelly said last Wednesday. “They are casualties of crimes that should never have taken place — because the people who victimized them often times should not have been in the country in the first place.”

Kelly outlined objectives of VOICE, including a “victim-centered approach” to support victims and their families, along with promoting awareness of available services to crime victims, such as the new automated service, DHS-Victim Information and Notification Exchange, which was created to help victims track the immigration custody status of those illegal alien perpetrators of crime.

ICE’s Victims of Immigration Crime Engagement Office (VOICE) was created in response to President Trump’s executive order to enhance public safety, which directed the Department of Homeland Security to create an office to support victims of crimes committed by criminal aliens.

Who was Kate Steinle? Who was Jamiel Shaw Jr.?