Posted on April 5, 2017 in Wednesday's Example of Media Bias 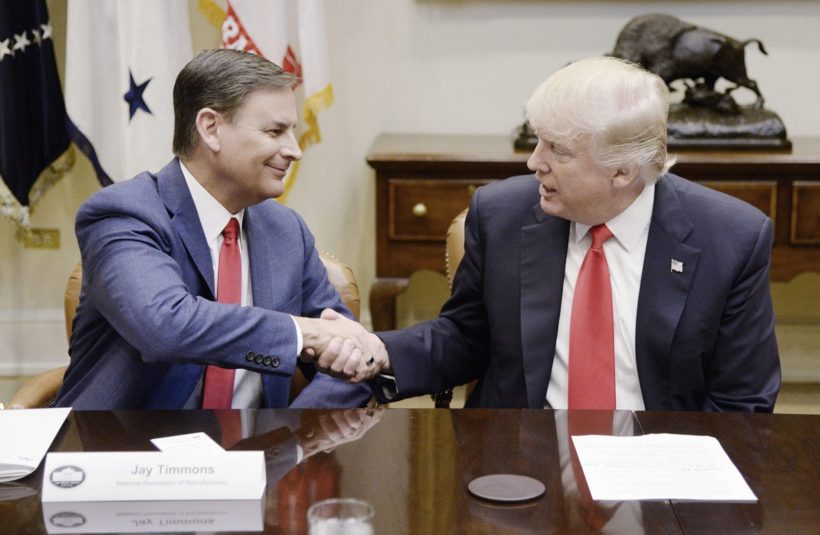 National Association of Manufacturers president Jay Timmons meets with President Trump and NAM members at the White House on March 31.

The National Association of Manufacturers (NAM) is a manufacturing industrial trade association. For the past 20 years, NAM has surveyed its membership of more than 14,000 large and small manufacturers to gain insight into their economic outlook, hiring and investment decisions and business concerns. NAM releases these results to the public each quarter.

On March 31, a NAM report related the following:

“Manufacturers’ Optimism at 20-Year High, According to New NAM Survey”

From the beginning of the report:

Fresh off the heels of the third straight month of manufacturing job growth, the National Association of Manufacturers (NAM) today released the first Manufacturers’ Outlook Survey since President Donald Trump took office. The survey shows a dramatic shift in sentiment, with more than 93 percent of manufacturers feeling positive about their economic outlook. This is the highest in the survey’s 20-year history, up from 56.6 percent one year ago and 77.8 percent in December.

The NAM’s release of the survey coincided with a meeting of small and medium-sized manufacturers with President Trump at the White House today. (Watch the meeting at the whitehouse.gov website)

According to NAM President and CEO Jay Timmons:

“Across America, manufacturers’ optimism is soaring, in no small part because of President Trump’s laser-like focus on pursuing bold action, particularly on rethinking red tape to address regulatory reform, to accelerate a jobs surge in America.”  (Visit the NAM website for the full report)

1. During the meeting with Trump, NAM head Timmons told the President the record optimism is due to: “…[your] focus on taxes, regulations, infrastructure investment. We appreciate your commitment to investment and job creation and manufacturing…”  What type of bias does the media display by not reporting this story?

2. Only The Daily Caller reported: “New Survey Shows How Optimistic Manufacturers Are Under Trump.” The few that did report on NAM instead had similar headlines:

Why do you think the media chose not to report a 20 year record high in optimism among manufacturers?