Iranian journalist: Many Iranians think Soleimani was a war criminal

Posted on January 8, 2020 in Wednesday's Example of Media Bias 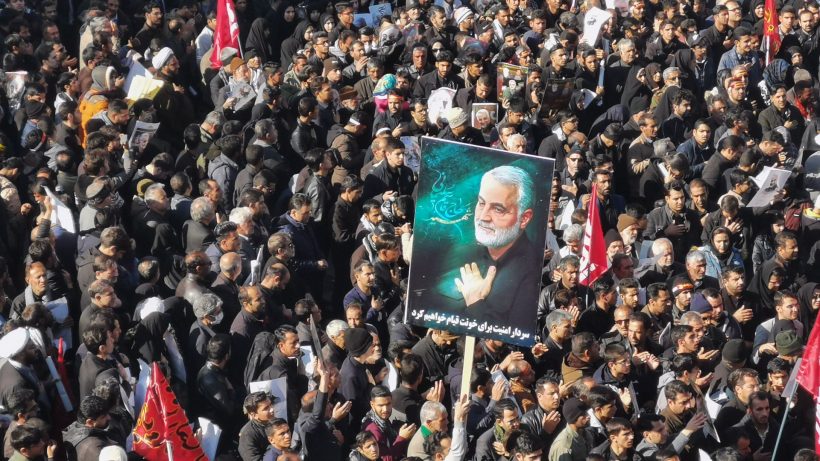 (by Masih Alinejad, The Washington Post, Jan. 6) – Over the next few days, it will be hard to escape footage of huge crowds gathering in Iranian cities to mourn the death of Qasem Soleimani, the Iranian general killed by a U.S. drone strike. For anyone watching, I have one piece of advice: Don’t take what you’re seeing at face value.

This past November, thousands of Iranians took to the streets across the country to protest against the regime, in the biggest challenge to the clerical rule in 40 years. According to Reuters, more than 1,500 people were killed by security forces, including units of Soleimani’s Revolutionary Guard, and at least 7,000 have been arrested. The Internet was shut down for five days. Tehran has yet to release official figures of its own, which suggests the death toll may have been even higher.

The protesters had harsh words for Soleimani and his foreign adventures, chanting against Iran’s involvement in Syria and its support of Hezbollah. That came as a shock to the regime, which portrays Soleimani as Supreme Leader Ayatollah Ali Khamenei’s adopted son.

Of course, people across the political divide are concerned about war. Nobody wants President Trump to bomb Iran’s cultural or historical sites as he threatened in a tweet on Saturday. I myself denounced the tweet on Fox News on Sunday.

But what to make of the crowds of flag-waving mourners streaming across TV screens? Without doubt, Soleimani had support among hard-liners and regime loyalists. The regime is not taking any chances, though. In the city of Ahvaz, where large numbers of people turned out to mourn Soleimani, the government has forced students and officials to attend. It provided free transport and ordered shops to shut down. According to videos sent to me by people inside the country, the authorities are making little kids write essays praising the fallen commander. First-graders who didn’t know how to write were encouraged to cry for Soleimani.

Some Iranians have compared the funeral services for Soleimani to those held for the Nazi leader Reinhard Heydrich, the Butcher of Prague, killed by Allied agents during World War II.

Soleimani was not a benign official:

The media in the Islamic Republic is heavily controlled. Public gatherings are allowed only if they are pro-regime. Critics are jailed or shot. (Even I, living outside the country, have received a death threat on Iranian national TV for my coverage of Soleimani’s killing.) So it’s not hard to use all the tools and resources of the state to stage a funeral procession.

I have more than 4 million followers on various social media networks, and I have received thousands of messages, voice mails and videos from Iranians in cities such as Shiraz, Isfahan, Tehran and even Ahvaz, who are happy about Soleimani’s death. Some complain of the pressure to attend services for him.

There are many Iranian voices who think Soleimani was a war criminal, but Western journalists rarely reach out to them. Ironically, the Western media is more skeptical of such state-organized events in other countries, such as Russia or North Korea, but seems to leave its critical sense at the border when it comes to the Islamic Republic. While it’s true that Western correspondents face daunting conditions when it comes to reporting the truth from Iran, that shouldn’t excuse the many times they’ve shown unwarranted gullibility toward the official version of events.

Remember all the articles that predicted how Iranians were going to unite in resistance to President Trump’s sanctions? The same analysts who missed November’s protests are now predicting Iranians will rally around the flag.

This sorely underestimates the anger and resentment over the crackdown. The authorities forced many families to pay blood money in order to receive the body of their loved ones from the morgue. Some even had to sign official forms waiving the right to hold a public funeral as a condition of getting bodies returned.

Two weeks ago, the parents and nine other family members of Pouya Bakhtiari, a 27-year-old engineer who was killed during the protests, were arrested to stop them from having funeral services. Two days later, on Dec. 26, thousands of security forces using armored cars, water cannons and even helicopters were deployed to stop mourning ceremonies for some of the victims.

These families of those killed are not mourning Soleimani. In 2009, the Revolutionary Guards led the crackdown on the so-called Green Movement protests against the disputed presidential election. Many of the mothers of those killed in 2009, in 2017 and in 2019 are rejoicing about Soleimani’s death. How do I know? Because they’ve sent me videos of themselves, speaking to the camera, dancing, or even sharing cakes and sweets.

I and others have been saying for years that the current repressive conditions in the country are not tenable and that more protests would break out. We were right. And I’ll say it again: Don’t be fooled. Iran will see more anti-regime protests.

Masih Alinejad is an Iranian journalist who currently works for VOA Persia and IranWire.

1. What type of bias does Iranian journalist Masih Alinejad highlight in her Washington Post commentary?

2. Maybe it is too difficult for  journalists from CNN, NY Times, Reuters, ABC, NBC, CBS, et al to interview Iranians so they instead take the word of the Iranian media, which is controlled by the Iranian government.  Why do you think there are widespread reports of the great mourning over the death of Soleimani across Iran – and no reports on the differing account by Iranian journalist Masih Alinejad – that many Iranians are happy over his death? And that he was responsible for the deaths of thousands of Iranians who peacefully protested for change?

3. What do you think of the following points made by Ms. Alinejad?

1. Bias by selection of sources and story selection.