‘Indivisible,’ with ties to Soros, works against Trump

Posted on February 15, 2017 in Wednesday's Example of Media Bias 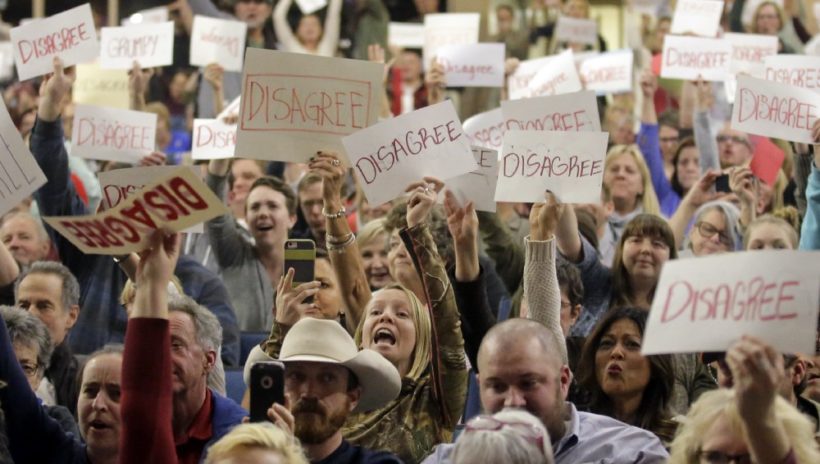 (by Fred Lucas, The Daily Signal, Feb. 10, 2017) – Democrats who used to work on Capitol Hill are helping to disrupt Republican lawmakers’ town hall meetings across the country through a nationwide effort to oppose and “resist” President Donald Trump’s agenda. …

They call their group Indivisible Guide, a name that came from an actual guide posted online telling activists how to pressure members of Congress. Among topics: what to say when going to town halls and calling or visiting a member’s office.

Leaders of the organization have loose ties to George Soros, the billionaire hedge fund manager who bankrolls liberal causes, according to the Capital Research Center, a conservative think tank that investigates nonprofits.

…Board members of Indivisible Guide denied financial backing from Soros. …while the Capital Research Center argues that Indivisible Guide’s board has indirect ties with left-leaning groups funded by Soros, as well as with other liberal organizations. …

Indivisible Guide boasts that it has disrupted town halls held by Republican lawmakers in Utah, California, Pennsylvania, Indiana, Michigan, and Nebraska. And the group, which amplifies its message over Twitter and other social media, promises it isn’t finished. Police had to escort Republican congressman Tom McClintock through an audience from the Tower Theatre in Roseville, Calif., Saturday, Feb. 4, 2017. (Randall Benton/The Sacramento Bee via AP)

One CNN report presented the disruption of a town hall meeting held Thursday night by Rep. Jason Chaffetz, R-Utah, as a sign of a “grassroots” reaction to Trump such as the taxpayer-based tea party movement was against the Washington establishment.

… The website of Indivisible Guide, also known simply as Indivisible, provides scripts for what activists should say when calling the office of their House or Senate members on various issues—among them opposing senior Trump adviser Steve Bannon’s role in the White House, Trump’s nomination of Neil Gorsuch to the Supreme Court, his refugee policy, and most other policy positions.

More than 4,500 local groups have signed up to resist the Trump agenda in nearly every congressional district in the country. What’s more, you all are putting the guide into action—showing up en masse to congressional district offices and events, and flooding the congressional phone lines. You’re resisting—and it’s working. … we want to demystify the heck out of Congress and build a vibrant community of angelic troublemakers.

1.What type of bias does the media display in not publicizing the background of Indivisible?

2. If former Republican congressional staffers formed a group to oppose and “resist” President Barack Obama’s agenda when he was elected, do you think the media would report that story differently from this one? Explain your answer.