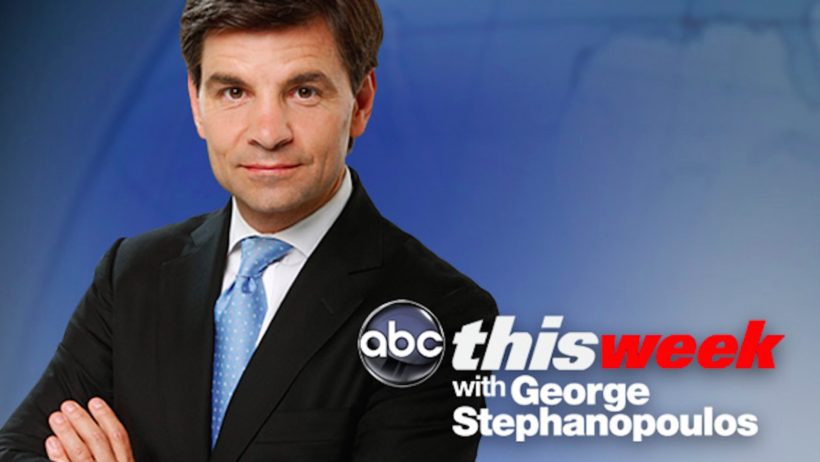 Excerpted from a May 18 article by Roger Aronoff, Accuracy in Media:

ABC News journalist  (and former Clinton advisor) George Stephanopoulos interviewed “Clinton Cash” author Peter Schweizer on his show on April 26. But the ABC host, formerly a Senior Advisor on Policy and Strategy for President Bill Clinton, treated his broadcast as more of an interrogation than an interview in an effort to discredit Schweizer and defend, in turn, the Clintons. A real interview would have endeavored to understand Schweizer’s critique of the Clintons, not demand to see a “smoking gun” or “evidence” of a crime.

ABC’s spokeswoman, Heather Riley, said that they would respond, but then turned first to a friendly ally – Politico – to spin the story favorably for the network and its golden boy.

“I thought that my contributions were a matter of public record,” said Stephanopoulos in his apology. “However, in hindsight, I should have taken the extra step of personally disclosing my donations to my employer and to the viewers on air during the recent news stories about the [Clinton] Foundation.”

ABC News initially incorrectly stated that he had given only $50,000 to the Clinton Foundation (an amount he later amended to $75,000) over three years.

The Washington Free Beacon’s Andrew Stiles reported that ABC’s Riley “worked in the White House press office from 1997 to 2000,” including serving “as a press contact for then-First Lady Hillary Clinton.”

But beyond that, Schweizer followed up on the week’s revelations, and found that Stephanopoulos’s ties with the Clinton Foundation were much closer than just cutting checks to the foundation. Schweizer called it “the sort of ‘hidden hand journalism’ that has contributed to America’s news media’s crisis of credibility in particular, and Americans’ distrust of the news media more broadly.”

He pointed out that Stephanopoulos:

Stephanopoulos inadvertently (not on purpose; not intentionaly) revealed in another setting [why people who make donations like his to the Clinton Foundation do so]. On the Jon Stewart show April 28, Stephanopoulos said:

“But everybody also knows when those donors give that money – and President Clinton or someone, they get a picture with him – there’s a hope that it’s going to lead to something. And that’s what you have to be careful of.  Even if you don’t get an action [the politician like Clinton to do something for you], what you get is access [to him/her] and you get the influence that comes with access [to the powerful politician like Clinton] and that’s got to shape the thinking of politicians. That’s what’s so pernicious* about it.” [*pernicious: causing great harm or damage often in a way that is not easily seen or noticed]

“Could Stephanopoulos, who is also ABC News’s chief anchor and political correspondent, be hoping for access to and exclusives from Bill and Hillary, giving him a competitive edge during the 2016 presidential campaign?” asks Lloyd Grove for The Daily Beast.

On the May 15 broadcast of Good Morning America Stephanopoulos “apologized” again – while patting himself on the back for supporting children, the environment, and efforts to stop the spread of AIDS. “Those donations were a matter of public record, but I should have made additional disclosures on air when I covered the foundation, and I now believe that directing personal donations to that foundation was a mistake,” he said. “Even though I made them strictly to support work done to stop the spread of AIDS, help children, and protect the environment in poor countries, I should have gone the extra mile to avoid even the appearance of a conflict.”

This is, basically, the same argument the Clintons and their Foundation have put forth to explain their conflicts of interest or “errors,” after having taken millions of dollars from companies and countries that had business with the U.S. government while Mrs. Clinton served as Secretary of State. Their failure to disclose many of these donations resulted in them refiling their tax returns for five years, once the obvious conflicts of interest came to light.

In reality the Clinton Foundation gives about 10% of what it collects to direct charitable grants, according to a study… “It looks like the Foundation – which once did a large amount of direct charitable work – now exists mainly to fund salaries, travel, and conferences,” writes David French. The study pointed out that “Between 2011 and 2013, the organization spent only 9.9 percent of the $252 million it collected on direct charitable grants.” In other words, less than $10,000 of the money that Stephanopoulos paid as tribute to the Clintons went to the causes he claims to care about.

Stephanopoulos has removed himself from the ABC-sponsored Republican presidential primary debate next February. Yet he simultaneously claimed, “I think I’ve shown that I can moderate debates fairly.” His decision to not participate ignores the bigger picture.

…It’s not just ABC’s Sunday show [that has a journalist affiliated with the Democratic party], but the two other main broadcast networks that also feature highly partisan  Democrats as hosts:

Stephanopoulos says he should have announced his conflict of interest. If such announcements become commonplace, which they should, where exactly will that end?

Chris Harper, formerly of ABC News, has posted his views, along with those of other mostly liberal former ABC News people, as cited by Kevin Williamson of National Review: “During the 15 years we worked for ABC News,” wrote Harper, “we remember that we had to sign a yearly disclosure of gifts worth more than $25 and contributions. Perhaps these documents no longer exist in the muddled world of TV news.”

Added Harper: “Mr. Stephanopoulos has few defenders among his former colleagues. According to a Facebook page, ABCeniors, the rather liberal bunch of former network staffers discussed the problems with his contributions. ‘That shows either indifference or arrogance. Or a nice cocktail of both,’ wrote one former ABC hand. A former producer noted: ‘He knew what he was doing, and he didn’t want us to know. That’s deceit.'” …

(From a May 18 article by Roger Aronoff, Accuracy in Media)

1.  ABC anchor George Stephanopoulos interviewed the author of a book critical of Bill and Hillary Clinton. What type of bias did Mr. Stephanopoulos display by not disclosing his $75,000 donation to the Clinton Foundation?

2.  Stephanopoulos in his apology said, “However, in hindsight, I should have taken the extra step of personally disclosing my donations to my employer and to the viewers on air during the recent news stories about the [Clinton] Foundation.”  As a journalist, should he have known to do so?  Explain your answer.

3.  Lloyd Grove of The Daily Beast asks, “Could Stephanopoulos, who is also ABC News’s chief anchor and political correspondent, be hoping for access to and exclusives from Bill and Hillary, giving him a competitive edge during the 2016 presidential campaign?”  Is this a legitimate question? Explain your answer.

1.  Bias by omission. He omitted his own conflict of interest in interviewing someone who was critical of his former boss and his wife, the assumed to be the 2016 Democratic presidential candidate.