Posted on June 9, 2010 in Wednesday's Example of Media Bias

-Read the excerpt below from Charles Johnson's June 6th report posted at LittleGreenFootballs.com.
-Read "Types of Media Bias" in the right column. Then answer the questions.

NOTE:  Reuters [News Service] … [appears] to have cropped news photos to favor the image of Muslim flotilla attackers.  The photo Reuters published … show[s] one of the attackers without a knife. [The original photo], …includes the knife in the hand of the attacker…  The pictures show the attackers trying to take an [Israeli] IDF Navy commando hostage on the Mavi Mamara ship, which was stopped by the [Israeli] Navy from continuing on course to Hamas-controlled Gaza [last week].  The attackers’ use of a weapon in the clash is an important news item because the “peace activists” claimed they were unarmed. … (from israelnationalnews.com/News/News.aspx/137924)

One picture cropped to remove a knife might be explained as incompetence or a simple mistake.

But now we have two pictures from the “peace activists” that were cropped by someone at Reuters to remove knives in the hands of the activists, as they attempted to take soldiers hostage.

Reuters has published this picture from the activists: 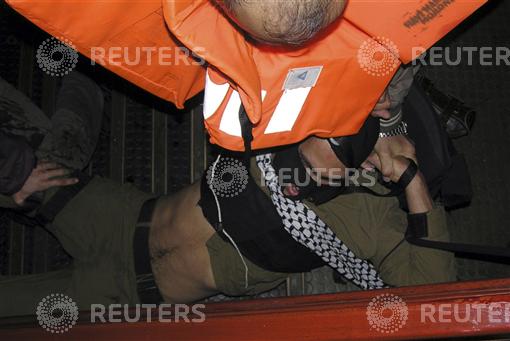 The picture [above] is a cropped version of this photo [below] from the IHH website (IHH is the Islamist group whose members rioted aboard the Mavi Marmara): 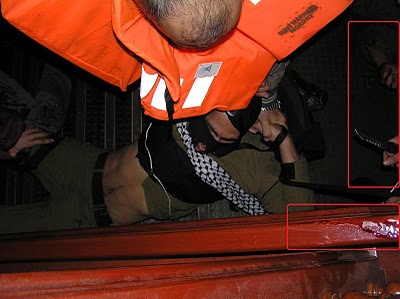 What did the Reuters photo editor crop out? A big knife and a big pool of blood.  [Notice the two red squares … added on the right side of the picture. One shows a knife in the hand of one of the terrorists and the bloody hand of an Israeli soldier. The one on the bottom right shows the blood of the soldier who was dragged to the ground after being stabbed. from yidwithlid.blogspot.com/2010/06/reuters-brings-fauxtography-to-gaza.html]

Read posts on the same story at:

Photographer and image analyst David Katz gave his expert opinion on the photos:

“It is crystal clear that someone at Reuters has deliberately hidden key parts of the original images. What we do not know at this stage is, who at Reuters did this and more importantly why?”

Since being exposed, Reuters has uncropped the offending photographs. However, this still leaves questions over how this was allowed to happen. What do you think?