Posted on March 23, 2016 in Wednesday's Example of Media Bias 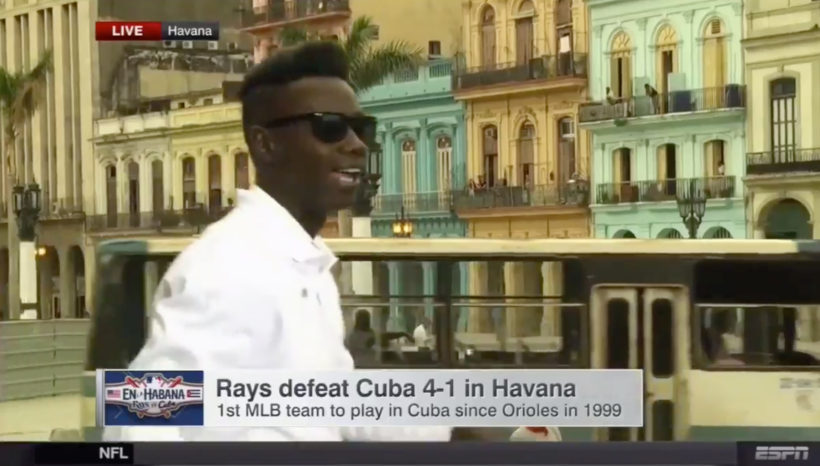 On Wednesday afternoon, after the Tampa Bay Rays played the Cuban national team, Cuban dissidents interrupted a live ESPN broadcast chanting “Freedom for Political Prisoners!” and “Down With Castro!”

They were then intercepted and dragged off by secret police officials.

ESPN was in Cuba to cover President Obama’s visit. He had just attended the baseball game with Cuban dictator Raul Castro.

Anchor Bob Ley was reporting live as shouts could be heard off camera and paper was thrown in the air as a young Cuban man  jumped into the shot.

“We have a moment here with a political demonstration on our set,” Ley said, stepping out of the frame.

The man threw papers into the air and yelled before being pulled down. The protester, as well as several others, could be seen being dragged away by “plain clothes policemen,” according to Ley. One man was aggressively thrown into the back of a police car, with his hands waving wildly. Ley said:

“Astonishingly, as soon as (the paper) hit the ground, they made several arrests, they were taken off here — dragged off here — one dissident was taken off, police restraining him by the neck, putting him in a car, so they’ve been taken away.”

Most U.S. media did not report on the violent arrest of these peaceful protesters who called “Freedom for Political Prisoners!” and “Down With Castro!”  Instead:

The headlines below are a story from President Obama’s visit that the media did judge was newsworthy:

1. What types of bias are illustrated in this post?

2. Why do you think American media outlets did not find this young man’s quest for freedom newsworthy?

3. Watch the ESPN video with the young man calling for freedom. Which do you think the media should have focused on: Why he was protesting? His age…his race….his fate (what happened to him and those with him? what type of treatment will they receive?…)

1. The media completely ignored this astonishing event: a young Cuban man in this repressive regime willing to risk probable imprisonment and mistreatment by Castro’s police. This demonstrates bias by: story selection (Obama and Castro doing the wave: newsworthy; young Cuban man being hauled off to jail for expressing his desire for freedom: not newsworthy)  and omission (every news outlet chose not to report this story).