Posted on October 9, 2019 in Wednesday's Example of Media Bias 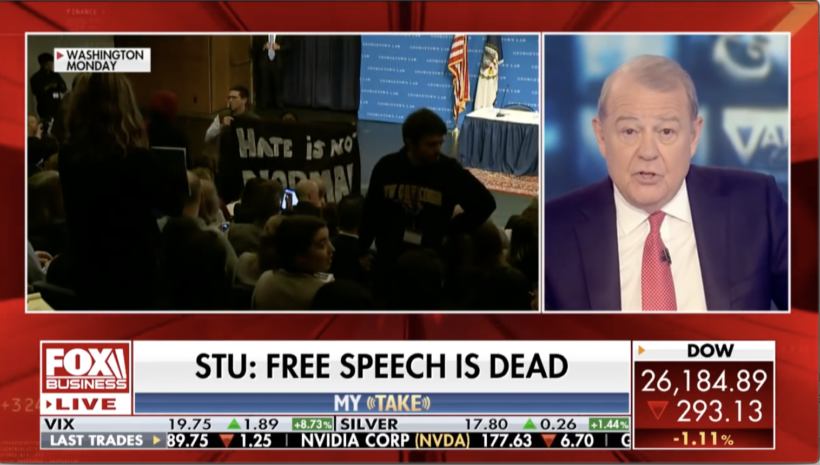 Kevin K. McAleenan, the acting secretary of homeland security, was forced offstage on Monday at Georgetown University’s law school by demonstrators who shut down his planned keynote address as they protested the Trump administration’s policies on illegal immigration.

Almost immediately after Mr. McAleenan was introduced to give a speech hosted by the Migration Policy Institute, nearly a dozen advocates and law students in the crowd stood up and started chanting “When immigrants are under attack, what do we do? Stand up, fight back.”

Mr. McAleenan tried to start speaking to the packed auditorium three times, but was drowned out by the chants of the protesters.

“There are some very serious issues that we can talk about in candor in a real dialogue, or we can continue to shout,” Mr. McAleenan said. “I’d like to take our dialogue today above the politics and the daily news cycle and talk about the challenges and efforts that we’ve faced over the past year.”

He said that he especially looked forward to the conversation since immigration lawyers, law students and advocates were in the crowd, before being drowned out by the protesters. When it was evident he would not be permitted to speak, and the university was allowing the protesters to disrupt his speech, he left. Watch a report and commentary from Stuart Varney on FoxBusiness:

1. Mr. McAleenan’s experience is not unique. Speakers with viewpoints that don’t fall in line with liberal progressive ideals have been shouted down and shut down on college campuses across the country. The university is traditionally the place where free speech  and an open exchange of ideas is most protected. What bias does the media displaly by not reporting on this story?

2. Do you think there would be plenty of media coverage if Obama administration officials, or anyone representing a liberal position were shouted down and prevented from speaking on a college campus?