Posted on September 7, 2016 in Wednesday's Example of Media Bias 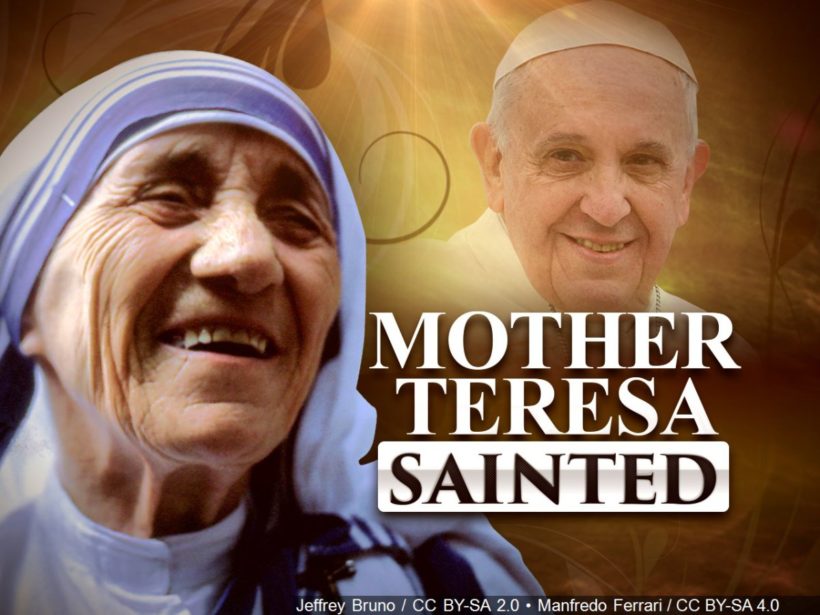 Excerpted from a post by Tom Blumer at MRC Business on Sept 4, 2016:
On Sunday Pope Francis canonized Mother Teresa as Saint Teresa of Calcutta.

Two media outlets in particular have recently given voice to those who stridently take exception to what virtually the entire world recognizes as Mother Teresa’s noble life and works:

The re-published Washington Post article largely featured the intense criticism of the late journalist Christopher Hitchens. …Hitchens’ outlook on then-Mother Teresa…was that she was “less interested in helping the poor than in using them as an indefatigable source of wretchedness on which to fuel the expansion of her fundamentalist Roman Catholic beliefs.”

That would be news to the thousands of people – the overwhelming majority of whom weren’t Catholic and remained that way – whose lives her facilities have saved. …

The tone of Kapur’s and Pokharel’s CNN writeup is so harsh that it’s important to note that Mother Teresa began her active work in the late-1940s….and that being among the “poorest of the poor” in India, from before Mother Teresa began her noble work up to and including today…involves existing in horrible conditions very few in the U.S. can imagine.

Mother Teresa’s primary [critic] is Hemley Gonzalez, whose criticisms of the current work of the Missionaries of Charity [founded by Mother Teresa] may — emphasis may — have some validity. But his assessment of St. Teresa herself has none:

‘Troubled individual:’ Mother Teresa no saint to her critics

… Disillusioned former volunteer Hemley Gonzalez didn’t meet her in person, but what he calls the “horrific remnants of her legacy” have left him deeply uncomfortable. After visiting the facilities she’s responsible for starting, he feels only a “troubled individual” could have set them up.

After the financial crisis of 2008, Gonzalez took a break from his real estate business in Miami and headed to India, where he spent two months volunteering at Nirmal Hriday, a home for the dying run by Mother Teresa’s Missionaries of Charity in Calcutta’s (now Kolkata) crowded Kalighat area.

Gonzalez says he was appalled at the poor level of hygiene and medical care he saw there. He says the organization didn’t vet him or the other volunteers. None, including himself, had any medical experience or received any training before working at the hospice.

… Chhanda Chakraborti is part of a group of local Kolkata volunteers who has been associated with the Missionaries of Charity for over 25 years. She served at Nirmal Hriday for several years before Gonzalez did.

“All these claims are rubbish. These critics are actually lying,” she says. “You go to Kalighat, people come in dying condition. Most of them regain their lives. How can they give life to a dying person while being careless with their health?”

What they do in the homes run by the Missionaries of Charity, says Sunita Kumar, a spokesperson for the group and a close friend of Mother Teresa, is offer basic care to the poorest of the poor.

Undercutting Gonzalez’s hygienic assessment proved much easier than one might have thought.

I was able to locate an online PowerPoint presentation from 2005 (seen here in Google cache) by a professor at India’s Prathima Institute of Medical Services. That presentation asserted that a full 157 years (at the time) after what the author described as the “Great Sanitary Awakening in Europe,” India’s “sanitary awakening is still a dream.” Mother Teresa died in 1997. If India’s hospitals and other medical facilities weren’t up to anything resembling Western standards eight years later, it seems more than a little unreasonable to go after the Missionaries of Charity at the time Mother Teresa was alive for having sub-Western practices. It’s also hard to imagine that sanitation practices at Indian hospitals had substantially improved in the three years before 2008, when Gonzalez arrived on the scene.

Additionally, in a July 2013 op-ed column at the New York Times, Ada Calhoun recalled the following from when she “volunteered for a time with Mother Teresa”:

I watched as members of the order drove a makeshift fleet of rickshaws around Calcutta’s streets, returning with ever more people in acute states of distress and neglect, some of them hours from death. The facilities were almost aggressively rickety — there was a hole in the bucket the nuns used to pull water from the well — but they were as good or better than what was otherwise widely available (as I learned myself when some weeks later I wound up at a free clinic in another part of India suffering from amebic dysentery).

On my last night in Calcutta, Mother Teresa blessed me, gave me a Virgin Mary medallion and told me to come back someday. Even though I’m not Catholic, I was moved by her total commitment to the work at hand, which amounted to diverting a flash flood of sorrow, suffering and need directly into her front door.

To be clear, if the current Missionaries of 2016 aren’t at least keeping up with local practices, they deserve criticism. But even if that’s the case, based on what’s been presented here, that doesn’t do anything to discredit Mother Teresa, who died 19 years ago.

But that hasn’t stopped Gonzalez from trying. CNN’s reporters allowed him to personally attack now-St. Teresa, and even used his assessment in their headline, even though he obviously never met her. As such, CNN owed us more background about Gonzalez, and failed to provide it.

It won’t surprise longtime readers that what CNN didn’t tell us about Mr. Gonzalez is quite revealing, and far from complimentary. Here is some of what CNN omitted, all of which is quite relevant when someone starts calling a person they never met who demonstrated visible lifelong selflessness a “troubled individual”:

His Facebook page, STOP the Missionaries of Charity, is filled with anti-Catholic tirades. One in particular, posted two dozen times, with different accompanying graphics, contends that “The concept of sainthood is a fabricated process by the vatican in order to continue to extract money from its followers and to try and remain relevant in a world that is increasingly rejecting these medieval and anachronistic practices. Mother Teresa’s upcoming canonization and new title of ‘saint’ is nothing more than a new wave of religious propaganda and fundamentalism disguised as compassion.”

Gonzalez is also a very frequent poster of relatively lengthy items at Humanists.com on a wide range of topics. There’s obviously nothing wrong with that, but it’s more than a little unusual that Mother Teresa’s most intense critic, who is supposedly “revolutionizing humanitarian efforts,” is going after someone who rarely if ever took a break from her work, yet spends a great deal of time on non-charitable pursuits. Yet only he supposedly knows how genuine charitable efforts should be conducted.

By now, it should be clear that either CNN should have told readers a lot more about Hemley Gonzalez — which would have exposed him as an anti-religious [person] obsessed with ruining the legacy of arguably the past century’s most dedicated and accomplished humanitarian — or it should have given him no attention at all. My vote would be for the latter.

Finally, there’s the issue of financial accountability and transparency. This is something the current sisters could consider improving. But there’s no record of any reported irregularity occurring during St. Teresa’s life, and she certainly lived the life of poverty she promised to live when she took her vows as a nun.

1. Which three types of bias does Tom Blumer’s post illustrate?

2. Mr. Blumer asserts in the 2nd to last paragraph:

“By now, it should be clear that either CNN should have told readers a lot more about Hemley Gonzalez — which would have exposed him as an anti-religious [person] obsessed with ruining the legacy of arguably the past century’s most dedicated and accomplished humanitarian — or it should have given him no attention at all. My vote would be for the latter.”

3. a) Aside from your religion (especially if you are not Catholic), it is responsible journalism for CNN to cast doubt on the good works and sacrifice Mother Teresa made based on one man’s testimony?  Explain your answer.
b) Consider the thousands of people who have volunteered at the Missionaries of Charity: should CNN have sent reporters to India to conduct an investigation before publishing these allegations which will cause people to doubt the credibility of these Sisters’ work with the poor in India? Explain your answer.

3. a) and b) Opinion questions. Answers vary.